Subvert cognition: Sleeping in this way is tantamount to suicide. Sleeping for 8 hours a day increases the risk of death

One-third of a person’s life is spent in sleep. No people in any era are more sleep anxious than contemporary people. Insomnia, staying up late, and lethargy have brought various scary research conclusions to the circle of friends.

The traditional view once believed that 8 hours of sleep a day is the healthiest sleep cycle, but everyone did not know that sleepiness may also be harmful to the body.

Recently, researchers from the National Cancer Center of Japan published an article titled “Association of Sleep Duration With All- and Major-Cause Mortality Among Adults in Japan, China, Singapore, and Korea” in JAMA Netw Open, the first time. It provides reference recommendations for adult sleep time, pointing out that 7 hours is the best sleep time and the risk of death is the lowest. 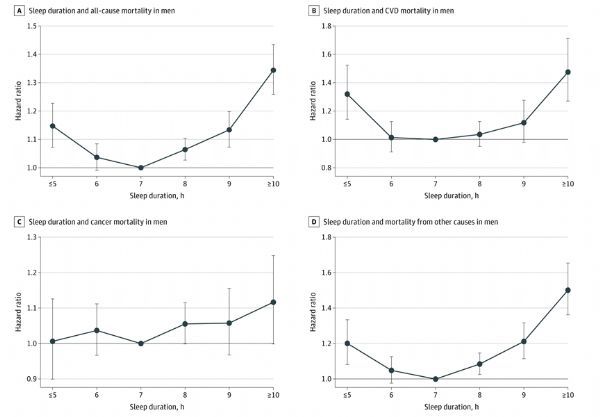 This study is Asia’s largest study on the relationship between sleep duration and mortality. It is led by the Asia Cohort Consortium (ACC), a consortium composed of more than 30 cohorts in Asia. A total of 322,721 adults with an average age of 54.5 years were enrolled. From China, Japan, Singapore and South Korea, after about 14 years of follow-up, it was found that there were 19,419 deaths among men and 13,768 deaths among women.

In further experiments, the researchers adjusted for specific causes of mortality based on the chi-square test, categorical variable and continuous variable one-way analysis of variance. The data shows that regardless of men and women, sleep time and all-cause mortality risk present this J-shaped relationship. Among them, the risk of all-cause death was the lowest when sleeping for 7 hours, and it is worth mentioning that among subjects whose sleep time was ≥10 hours, the correlation between men and women and mortality was the strongest.

In fact, previous studies have found the correlation between sleep and the risk of death. In 2018, a study led by researchers at the University of Keele in the United Kingdom was published in the well-known cardiovascular journal JAHA. The study pointed out , Sleeping more than 7-8 hours per night may be related to the increased risk of death and cardiovascular disease, and sleep quality is also very important.

For decades, people’s sleep time and sleep quality seem to have been going downhill. In China, nearly 300 million people have sleep disorders, so I believe you must be very distressed. How should I sleep?

In February of this year, a study led by a research team from Beijing University of Technology found that the bedroom environment is closely related to sleep quality. The human body prefers an environment of 23°C before going to bed, and prefers 26°C during sleep. Not only that, but low Sleep more comfortably at the level of CO2 concentration.

Subvert cognition! Sleeping in this way is tantamount to suicide.