Intravenous infusion of stem cells will let you say goodbye to insomnia!

Intravenous infusion of stem cells will let you say goodbye to insomnia! Stem cell therapy is expected to solve insomnia and get rid of sub-health!

In our lives, sleep time accounts for almost one-third. If we do not sleep for five consecutive days, it will affect our lives. Especially in today’s ubiquitous electronic devices such as tablets and smart phones, lack of sleep has become the norm.

Having a good quality sleep can not only eliminate fatigue, but also has a good recipe for a radiant complexion. However, many people cannot fall asleep even if they are exhausted. Insomnia has become the norm.

Survey data shows that more than 300 million Chinese people suffer from insomnia, and the incidence of adult insomnia is as high as 38.2%.

The “2019 National Health Insight Report” shows that 84% of “post-90s” do not sleep well, which is the worst sleep among all interviewed groups.

The shortest sleep time is only 4 hours. The average daily sleep time of Chinese adults is 6.5 hours, which is far from the recommended sleep time of 7-8 hours.

Insomnia manifests as difficulty in falling asleep, incoherent sleep, and the inability to continue falling asleep after waking up midway.

It is easy to cause fatigue, emotional disturbance, and circadian rhythm disorder, which seriously affects the quality of life.

The above symptoms are called chronic for more than 6 months. insomnia. Studies have found that insomnia is closely linked to depression.

Sleep needs vary with age. As you age, you may need less and less sleep (infants and young children need more than 10 hours of sleep, but elderly people generally stay at 6-8 hours).

Generally speaking, children and adolescents fall asleep for more than 20 minutes, and for middle-aged and elderly people for more than 30 minutes, clinically significant sleep disorders appear. Insomnia is the most common one.

03 What are the problems caused by lack of sleep?

In a clinical study involving 3974 healthy volunteers with a follow-up period of nearly 10 years, researchers found that compared with people who slept 7-8 hours a day, those who slept less than 6 hours a day had whole body atherosclerosis. The risk of plaque formation like sclerosis increased by 27% . 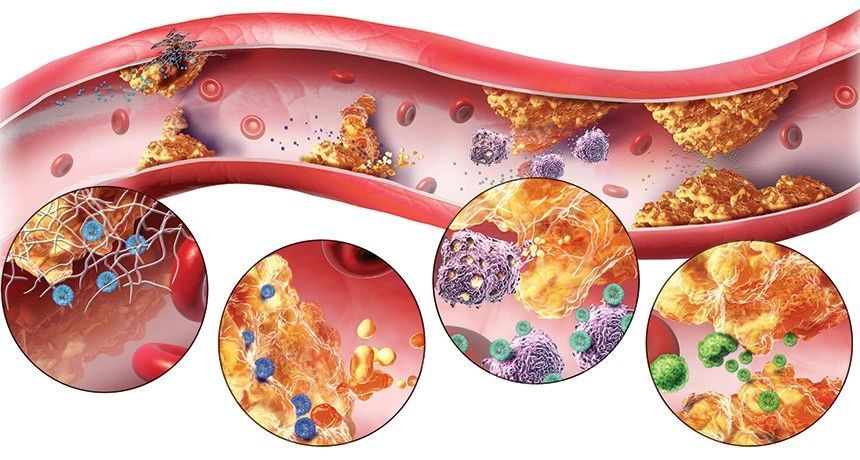 The formation process of atherosclerosis

Yes, you read that right, not only the cardiovascular arteries, but the risk of atherosclerotic plaque formation in all parts of the body is greatly increased, and these volunteers are healthy middle-aged people aged 40-54 .

A large number of epidemiological studies have found that insufficient sleep and excessive sleep time are both related to the increased risk of cardiovascular disease.

Regarding the relationship between sleep time and mortality risk, a large number of sample studies have been conducted abroad.

Sleep time is between 5.5 and 7.4 hours, with the lowest mortality rate. Less than 4.2 hours or more than 8.6 hours. The risk of death will double

What is good sleep quality?

● Fall asleep fast, you can fall asleep in about 30 minutes after going to bed;

● Deep sleep, deep breathing, not easy to wake up;

● I don’t wake up at night or rarely wake up, there is no startled dreams, and I forget my dreams soon after wake up.

Although traditional sedative and hypnotic drugs have good curative effect and quick effect in the treatment of insomnia, their adverse reactions are obvious. Non-drug treatment includes cognitive behavioral therapy and TCM non-drug therapy.

The treatment process of cognitive behavioral therapy is complicated, takes a long time and is prone to relapse.

Finding a simple and effective treatment for chronic insomnia is also the goal of the majority of neuropsychiatrists.

Although traditional sedative and hypnotic drugs are effective in treating insomnia, they have obvious adverse effects. Non-drug treatments include cognitive behavior and TCM non-drug treatments, etc.

The treatment process is complicated and the effect is not very accurate. Finding a simple and effective treatment for chronic insomnia is also the goal of the majority of neuropsychiatrists.

As the research on stem cell technology has become a global research hotspot, doctors from Zhejiang University School of Medicine and Zhejiang Armed Police Corps Hospital have clinically discovered that intravenous infusion of umbilical cord mesenchymal stem cell suspension, the transplantation group of patients after cell transplantation, the patient’s The effect of improving sleep quality, sleep disturbance and daytime dysfunction can last for 12 months, except for some patients who are excited that night after the infusion.

The symptoms of poor sleep were relieved naturally after 2-3 days, and there were no other adverse reactions; one month after treatment, the sleep improvement effect of umbilical cord mesenchymal stem cells was equivalent to that of oral drugs; after 2 months of treatment, the sleep quality score of the transplantation group It was significantly better than the control group; after 3 months of treatment, the quality of life of the transplantation group was also significantly better than the control group.

Observation results show that intravenous infusion of umbilical cord mesenchymal stem cells is effective for 1 month in the treatment of chronic insomnia, and the effect of one treatment can last up to 1 year, which can significantly improve the sleep quality of patients.

06 The mechanism of action of stem cells on insomnia

Patients with chronic insomnia have damages such as degeneration, degeneration, and apoptosis of neuronal cells in the cerebral cortex.

As the most widely studied medical technology at present, mesenchymal stem cells have the role of tissue repair and immune regulation.

Through intravenous infusion, a large number of neurotrophic factors secreted by it can improve the neurotransmitter environment and maintain the integrity of nerve cell tissues.

At the same time, it can upregulate the patient’s Treg cells, complete the repair and supplement of damaged cells, and ultimately improve the long-term insomnia caused Neurasthenia and other symptoms.

The immunomodulatory effect of stem cells can help reduce the increase of immune cells and inflammatory factors caused by insomnia in patients, and play an obvious anti-inflammatory and immune-regulating effect.

Epidemiological data show that 1 in 10 people in some countries suffer from insomnia, and there is a lack of precise and effective treatment for chronic insomnia.

Although people taking sleeping pills can have a quick effect in a short time, long-term use will have many side effects and make patients’ daytime dysfunction.

Non-drug treatment of chronic insomnia is often cumbersome, time-consuming, and the efficacy is uncertain, and it is difficult for patients to persist.

Therefore, exploring new therapies has become the direction of the efforts of doctors from all over the world. The good results shown by umbilical cord mesenchymal stem cell transplantation undoubtedly opened up a new treatment path for insomnia.

Intravenous infusion of stem cells will let you say goodbye to insomnia!