The more you drink, the smaller your brain! A study of more than 30,000 people shows that a can of beer a day is enough to make the brain smaller!

Alcohol consumption is one of the leading causes of death, disability and disease burden worldwide.

Long-term excessive drinking can cause liver damage, gout, colorectal cancer, breast cancer, and increased risk of cardiovascular disease. Its damage to the nervous system should not be underestimated.

“Excessive drinking is harmful to health” has become a consensus, but most people’s views on moderate drinking are still in a state of ambiguity.

Some countries, such as China and the United States, recommend avoiding alcohol in dietary guidelines, even if drinking alcohol should be in moderation, but In some Mediterranean countries, the view that moderate alcohol consumption is beneficial to health, considering the cardiovascular protective effects of red wine.

Recently, a new large population survey study from the University of Pennsylvania shows that even moderate drinking can make our brains smaller, and the more alcohol we drink, the more obvious the degree of brain volume changes. The study was published March 4 in Nature Communications.

The study included a sample of 36,678 healthy people aged 40-69, who recorded their alcohol consumption through questionnaires, and collected magnetic resonance imaging of their brains, which was used to calculate gray and white matter in different regions of the brain. volume.

After controlling for a variety of variables, including participants’ age, height, handedness, gender, smoking status, socioeconomic status, ethnicity, and place of residence, the researchers found:

Consumption of 0-1 unit of alcohol per day did not have much effect on brain volume; however, intake of 1-2 units of alcohol per day decreased gray and white matter volume by 0.127 and 0.074 standard deviations, respectively; while intake of 2-3 units per day Alcohol unit, gray matter and white matter volume decreased by 0.223 and 1.28 standard deviations, respectively (compared to 1-2 alcohol units, the reduction was increased by 75%) .

This also means that the relationship between alcohol consumption and brain volume reduction is not linear, but an exponential relationship. The more you drink, the greater the impact on the brain, even if you remove the highest drinking group in the population. After that, the conclusion still holds.

Moreover, the reduction in brain volume caused by drinking is not limited to one area of ​​the brain, but affects multiple brain areas broadly, including the frontal lobe, parietal lobe, insula, temporal lobe, and cingulate gyrus. 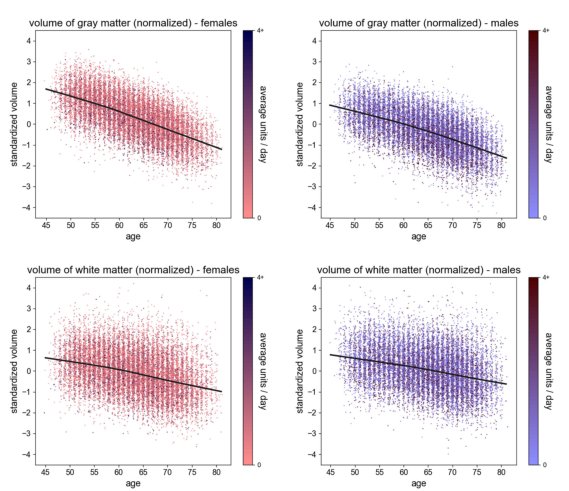 Under normal circumstances, brain volume decreases with age, but some patients with neurodegenerative diseases such as Parkinson’s disease and Alzheimer’s disease have more severe brain atrophy, diffuse brain atrophy It is also associated with memory impairment, cognitive impairment, mental decline, and personality changes.

The number of years of premature brain aging is also exponentially related to daily alcohol consumption, which means that the last drink may have a greater impact than any previous drink, so drinking one less drink is more likely for those who drink the most. significance. 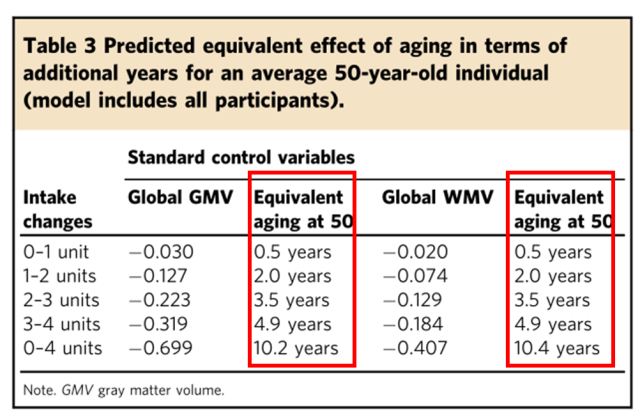 From this study, it can be concluded that 8 grams of alcohol per day is enough to change our brain .

A 330ml can of beer can easily reach this critical point. If the average daily intake of drinkers in China is 30 grams for men (3.75 alcohol units), 12.3 grams (1.5375 alcohol units) for women, it can be said that it is almost as difficult for a person with a drinking habit to control the daily alcohol intake to be less than 8 grams.

So, with alcohol, there is never moderation, and the best thing to do for your health is to stay away from alcohol.