Both genetic and epigenetic changes are important factors in carcinogenesis, tumor progression and metastasis. Broadly speaking, the incidence of cancer is directly related to biological/genetic age. DNA methylation is an important epigenetic regulatory mechanism that changes continuously during the life cycle and is an important part of the process of “epigenetic aging”. Notably, recent studies have demonstrated that epigenetic senescence plays a major role in tumorigenesis.

Epigenetic alterations contribute to cancer development by affecting multiple oncogene and tumor suppressor gene pathways in a wide range of histologies, as well as by affecting the activation, differentiation and function of immune cells such as T cells and NK cells . In fact, a recent study has shown that it is tissue environment-induced epigenetic programming that initiates tumorigenesis, findings that provide a strong rationale for the application of epigenetic medicines not only as cancer therapeutics, but also Can be used to prevent cancer because they can synergistically target “normal” cells, including immune cells and precancerous cells.

As a major epigenetic mark, DNA methylation is inherited through mitosis and is involved in stable gene transcriptional repression, especially when it is located near the transcriptional start of mammalian genes. The most intensively studied covalent modification of DNA is 5-methylcytosine ( 5mC ), a label catalyzed by DNMT.

In mammalian genomes, 5mC is mainly present in CpG dinucleotides, and 70–80% of the 28 million CpG dinucleotides in the human genome are methylated. In mammals, three active DNMTs have been identified, named DNMT1, DNMT3a, and DNMT3b.

Histones can undergo various forms of post-translational modifications ( PTMs ), including acetylation, methylation, phosphorylation, ubiquitination, as well as ADP ribosylation, sulfonylation, and citrullination. These make up the so-called “histone code” that regulates chromatin structure, recruitment of remodeling enzymes and regulation of gene activity.

Phosphorylation is another highly dynamic form of histone PTMs. It occurs on serine, threonine and tyrosine residues, mainly in the N-terminal tail of histones, and is controlled by the competitive action of kinases and phosphatases. As an important part of the “histone code”, PTMs play key roles in DNA damage repair, chromatin compaction, transcriptional regulation, and a range of biological processes including tumorigenesis and cancer progression.

Epigenetic regulation of the tumor microenvironment

Macrophages are key innate immune cells in the TME, where they regulate primary tumor growth, angiogenesis, metastatic spread, and tumor response to interventional therapy. In macrophages, hypoxia attenuated the expression of Jumonji histone demethylase activity, resulting in increased histone H3K9 methylation and decreased chemokine expression, resulting in changes in the immune landscape within the TME. 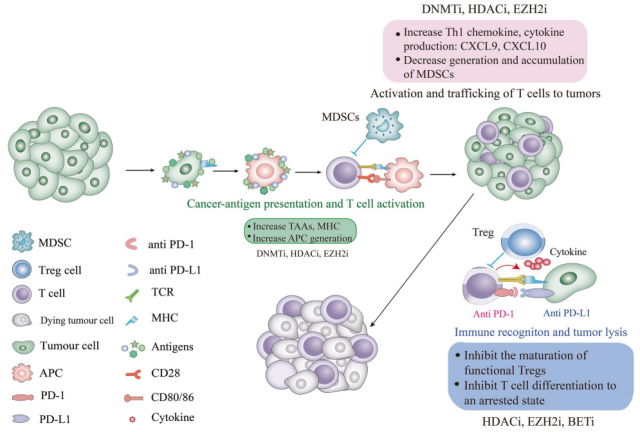 Myeloid cells play an important role in the recognition of cancer cells by the adaptive immune system and coordinate the initiation of inflammatory and protective antitumor immune responses. These cells include granulocytes, monocytes, macrophages, neutrophils, DCs and MDSCs.

DC cells initiate and coordinate adaptive immune responses against infection and disease, and they are central to the development of immune memory and immune tolerance. Dendritic cells rapidly integrate signals from their tissue microenvironment and respond to those signals accordingly, and this dynamic change relies on epigenetic changes in the chromatin structure of DC cells.

MDSCs are induced during tumorigenesis, and they mediate potent tumor-promoting activities. Studies have shown that in the presence of tumor-associated media, there are extensive demethylation and DNA methylation at some specific sites in the genome of MDSCs, which are associated with increased immunosuppressive signature-specific genes.

Furthermore, numerous studies have shown that epigenetic pathways of histone modifications regulate various aspects of MDSCs. For example, HDAC11 is a novel epigenetic regulator that regulates cell expansion and function in tumor-associated MDSCs.

NK cells play an important role in immune surveillance and elimination of stressed, infected or transformed cells. For NK cells, the H3K4me3 demethylase Kdm5a is required for cell activation.

For T follicular helper ( Tfh ) cells, it has been demonstrated that the VHL-HIF-1α axis plays an important role in initiating Tfh cell development through epigenetic reprogramming of glycolysis.

EZH2 is an HMT that catalyzes H3K27me3 and affects Th1, Th2 and Treg cells primarily through HMT activity. Studies have shown that EZH2 knockdown impairs Tfh differentiation and activation of transcriptional programming.

The development of Treg cells is critically dependent on FoxP3, and FoxP3 expression is required for optimal Treg repressive activity, and studies over the past few decades have shown that DNA methylation of CpG islands in enhancer regions controls FoxP3 expression in T cells.

In addition, TET-methylcytosine dioxygenase is also critical for the functional stability of Treg cells. A series of studies have demonstrated the critical role of TET in maintaining stable FoxP3 expression in Treg cells.

Epigenetic regulation of gene expression plays a key role in acquiring and maintaining the effector functions of CD8+ T cells, as well as the rapid and robust response of memory CD8+ T cells to antigenic rechallenge. Epigenetic mechanisms also influence the stemness and fate of CD8+ T cells.

Metabolic pathways such as glycolysis or oxidative phosphorylation regulate macrophage function during inflammation and tissue repair, and α-ketoglutarate coordinates macrophage activation to the M2 phenotype through metabolic and epigenetic reprogramming.

Immune checkpoint molecules ( ICMs ) include PD-1, CTLA-4, TIM-3, LAG-3 and TIGIT. The expression of these molecules and their receptors on the surface of cancer cells and immune cells, or their soluble secreted forms, helps tumor cells evade immune surveillance.

Epigenetic mechanisms play a key role in regulating the expression of ICMs and their receptors in the TME. As a specific example, LAG-3 DNA methylation correlates with the expression of this immune checkpoint molecule in both tumor and immune cells, affecting the fate of immune cell infiltration in clear cell renal cell carcinoma.

Epigenetic drugs are often used in combination with other immune stimulators to achieve five goals:

Currently, a large number of small-molecule enzyme inhibitors or activators involving epigenetic regulatory pathways are being developed for clinical use. Many epigenetic drugs have received regulatory approval for the treatment of human malignancies.

In 2004, the FDA approved 5-azaC ( trade name Vidaza ) for all five stages of myelodysplastic syndrome ( MDS ), followed by 5-aza-dC in 2006. These two drugs currently represent first-line therapy for MDS when stem cell therapy is not appropriate. They are also used in the treatment of chronic myelomonocytic leukemia ( CMML ) and AML.

Romidepsin was the second HDAC inhibitor approved by the FDA in 2009. Subsequently, Belinostat and Panobinostat, along with Chidamine, were both approved for the treatment of relapsed or refractory peripheral T-cell lymphoma ( PTCL ) or multiple myeloma.

The third wave of FDA drug approvals has occurred in the past few years. In 2017 and 2018, isocitrate dehydrogenase 1 and 2 ( IDH1/2 ) inhibitors, Enasidenib and Ivosidenib, were approved for the treatment of relapsed or refractory AML, respectively.

Finally, in 2020, the FDA granted accelerated approval to tazemetostat, an inhibitor of EZH2, for the treatment of epithelioid sarcoma and relapsed/refractory follicular lymphoma.

To date, epigenetic drugs have generally not demonstrated sufficient efficacy in advanced tumors to qualify for FDA approval, with the exception of a few types of solid tumors, T-cell lymphoma, epithelioid sarcoma, and refractory follicular lymphoma or other regulatory agency approvals.

However, some clinical studies on solid tumors show promise. First, Tazemetostat is a representative of the first class of inhibitors and is effective against two solid tumors. Monotherapy demonstrated clinically meaningful, durable responses and was generally well tolerated in patients with relapsed or refractory follicular lymphoma or advanced epithelioid sarcoma after multiple treatments.

Second, the combination of two or more epigenetic drugs may be a good option to improve the antitumor efficacy of treatment. In one study, the combination of azacitidine and romidepsin with IFN-α was demonstrated to have high therapeutic potential, targeting the most aggressive cellular components of colorectal cancer ( i.e., metastatic cells and cancer stem cells ) and modulating Key survival and death pathways ( including tumor ICD ).

In another study, investigators evaluated the combination of azacitidine and entinostat in patients with relapsed metastatic NSCLC, showing objective, durable responses in some patients with refractory NSCLC.

Furthermore, in preclinical studies, EZH2 inhibitors have been reported to enhance the antitumor response of ICIs. In one case report, a patient with SMARCB1-negative chordoma treated with an EZH2 inhibitor ( tazemetostat ) had a persistent systemic response to radiation over 2 years.

Functional analysis revealed a marked increase in intratumoral and stromal infiltration of CD8+ T cells and Treg cells, which was associated with enhanced expression of PD-1 and LAG-3 checkpoint molecules on T cells.

Currently, there are multiple clinical trials of epigenetic drugs combined with ICIs in progress. 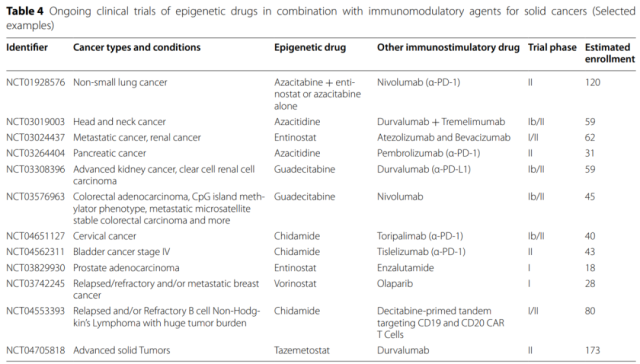 There is compelling evidence that epigenetic regulation affects cancer cells, immune cells, stromal cells, interactions between cancer cells and immune cells, and the state of the immune TME. Thus, as an intervention, epigenetic modulation itself can induce robust antitumor immunity.

Therefore, a reasonable strategy to further enhance the efficacy of immunotherapy is to combine certain epigenetic regulators with one or more classical immunotherapy regimens, such as cancer vaccines, ICIs, oncolytic viruses, CAR-T cells, TCR- T cells or other novel immune stimulators.

Epigenetic drugs can induce ICD and turn tumors from cold to hot, and they may work synergistically with other immunotherapeutic regimens. In the future, these combination regimens may show promising application in clinical studies.