As a result, patients have to be bedridden for long periods of time, which severely limits the patient’s ability to stand and walk, resulting in a greatly reduced quality of life for patients and shortening their lifespan.

The patient on the left above has been bedridden for a year and a half due to Parkinson’s multiple system atrophy , but with the help of two scientists, she is now able to stand and walk a distance of 250 meters by implanting electrodes in her spinal cord .

On April 6, 2022, the study was published in the top international medical journal ” New England Journal of Medicine ” (NEJM) under the title: Implanted System for Orthostatic Hypotension in Multiple-System Atrophy . The study was led by Dr. Grégoire Courtine of the Swiss Federal Institute of Technology in Lausanne and Jocelyne Bloch , a neurosurgeon at the University Hospital of Lausanne .

The device includes electronics implanted directly into the spinal cord to reactivate neurons that regulate blood pressure, preventing patients from losing consciousness due to the rapid drop in blood pressure every time they stand.

After the device was implanted directly into the patient’s spinal cord, the patient’s body’s ability to regulate blood pressure improved, allowing the patient to stay awake longer while standing and to be able to walk after starting physical therapy.

According to Jocelyne Bloch , this advance paves the way for an important clinical breakthrough in the treatment of neurodegenerative diseases. We’ve seen before how therapy with implanted electrodes can be used to help people with spinal cord injuries.

This study gives us a glimpse of the promise of this treatment for neurodegenerative diseases, and is the first to successfully improve blood pressure in patients with multiple system atrophy in Parkinson’s disease (MSA-P) .

Grégoire Courtine said the technology was originally developed for pain relief. Going forward, the research team will develop a system specifically for orthostatic hypotension to help patients afflicted by this condition around the world.

In fact, this is not the first time they have performed miracles.

Three fully paralyzed spinal cord injury patients were treated with The ability to move independently was restored and was able to stand, walk, cycle, swim, and control trunk movements. 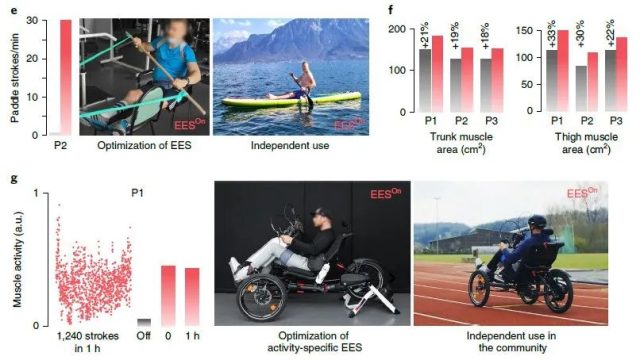 On October 31, 2018, Grégoire Courtine and Jocelyne Bloch , et al. published a paper in Nature , using a targeted neural technology they developed to reactivate spinal cord neurons using electrical stimulation, allowing three patients with chronic paraplegia due to severe spinal cord injury.  Gained the ability to walk . The paper was also selected as the cover paper of the current issue. 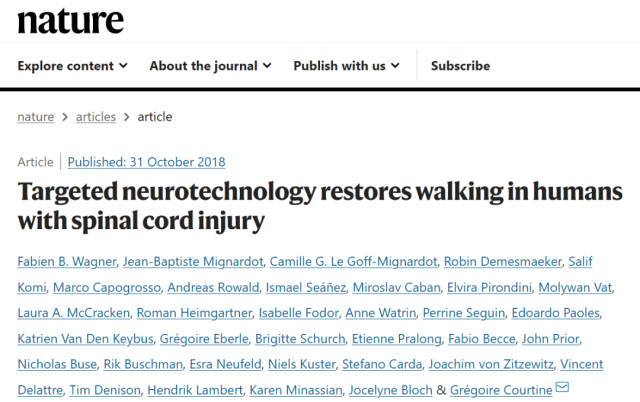 The studies are a collaboration between EPFL, the University Hospital of Lausanne and Onward Medical , a company founded in 2014 to develop therapies to restore movement, independence and health in people with spinal cord injuries.

The company currently has three therapeutic devices granted breakthrough device designation by the FDA and is conducting clinical trials in the United States, Canada, Europe, and other locations.

The leaders of these studies, Grégoire Courtine and Jocelyne Bloch , are co-founders of Onward Medical . The company will be listed on Euronext Amsterdam in the Netherlands in October 2021.