Exploring the role of cellular senescence in the treatment of cancer

Nature Series Review: Exploring the role of cellular senescence in the treatment of cancer.

Anti-aging is an eternal topic of human beings, but do you know about cellular aging ?

Before introducing cellular senescence, let’s take a look at the definition of aging : We define it broadly as the time-dependent functional decline that affects most organisms. 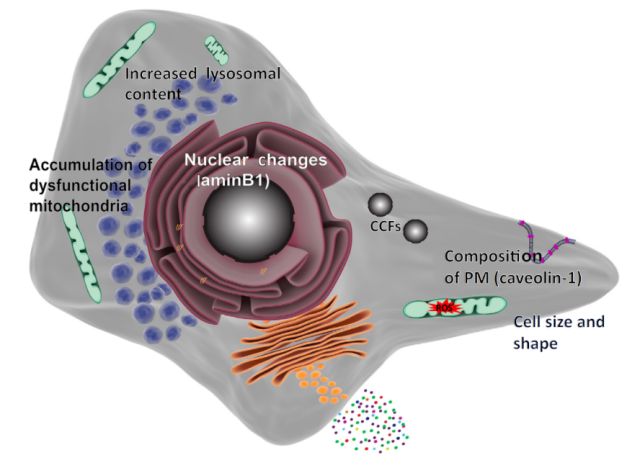 In the third edition of cancer hallmarks, which is newly proposed in 2022, the cellular senescence of tumors can be assessed based on these markers . 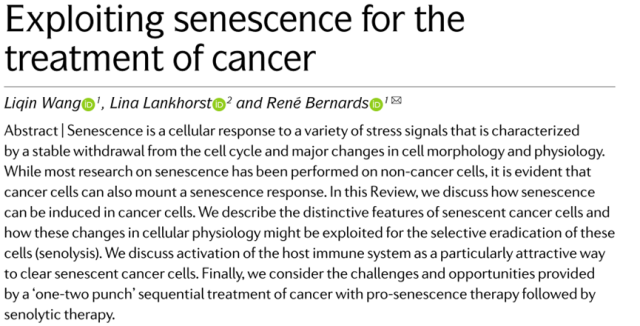 Activation of oncogenes such as HRASV12 triggers growth arrest called oncogenic-induced senescence (OIS) , which was first demonstrated in vivo in 1997.

Following this, in 2005, the concept of OIS was extended to multiple oncogenic models, including lymphoma, prostate cancer, lung adenoma, hyperplastic pituitary, and melanocytic nevi. Melanocytic nevi caused by mutations in the oncogene BRAF typically persist for decades to avoid progression to melanoma.

Inhibitors of topoisomerase I and II, such as doxorubicin, etoposide, and camptothecin, are widely used to treat various types of cancer and have been shown to disrupt DNA strands after DNA supercoils are unwound Connection.

This results in massive DNA damage and increased expression of p53 and its downstream targets CDKN1A and PAI1 (also known as SERPINE1) , which leads to senescence.

Platinum-based drugs, such as cisplatin, carboplatin, and oxaliplatin, also cause extensive DNA damage through DNA cross-linking, leading to aging.

While a considerable number of existing chemotherapeutic agents have the ability to induce senescence, in most cancers the apoptotic response predominates.

Radiation therapy is widely used in the treatment of many types of cancer. This anticancer treatment can induce irreparable DNA damage responses, which in turn activate ATM or ATR and p53-p21 pathways to mediate apoptosis and cellular senescence.

Unlike chemotherapy, this treatment can be applied topically, so there is less collateral damage to normal tissue, so it may also reduce secondary cancers.

A hallmark of senescent cells is the upregulation of cyclin-dependent kinase (CDK) inhibitory proteins , such as Ink4a and p21, to induce cell cycle arrest.

In contrast, cancer cells typically upregulate CDK levels in order to progress through the cell cycle.

Therefore, drugs that inhibit CDKs or increase levels of CDK inhibitory proteins are currently being investigated for use in cancer therapy to induce senescence.

In particular, CDK4 and CDK6 (hereinafter referred to as CDK4/6) play an important role in the progression from G1 phase to S phase and are overexpressed in many human cancers.

As discussed above, replicative senescence is a response to telomere attrition . Cancer cells often circumvent this by reactivating telomerase activity.

So far, many compounds that inhibit the telomerase complex have been identified as candidates for anticancer therapy.

Among them, BIBR15 and GRN163L are potent telomerase inhibitors that induce senescence and inhibit cancer cell proliferation .

However, the use of GRN163L for anti-aging therapy requires further investigation, as this compound can also induce apoptosis in human pancreatic cancer cells .

5. Modulation of the epigenome to induce cellular senescence

Another way to induce senescence is by modulating the epigenome of cancer cells.

Inhibition of DNA methyltransferases by decitabine results in demethylation of the CDKN2A promoter CpG-rich region, induction of Ink4a and ARF expression and senescence .

The histone deacetylase inhibitor Vorinostat can also upregulate the expression of multiple tumor suppressor genes, such as CDKN2A and TP53, and can induce senescence in different cancer cell lines through these two major pathways.

The initiation and maintenance of cellular senescence is dependent on P53, which is frequently damaged in cancer cells . In mouse models, gene repair of Tp53 leads to regression of sarcomas and liver cancers by inducing a senescence response, while an apoptotic response is observed in lymphoma treatment.

Furthermore, senescence induction was accompanied by upregulation of SASP and recruitment of immune cells to tumors, suggesting that senescent cancer cells were efficiently cleared. Currently, several compounds that activate p53 are under development.

For example, the MDM2 inhibitors Nutlin 3 and RG7112 can interfere with the p53-MDM2 interaction, which can induce senescence in a human cancer cell model (wild-type TP53) . Notably, disruption of the p53-MDM2 complex can also induce apoptosis, but not senescence .

Considering the frequent mutations of the TP53 and RB1 pathways in human cancers and the involvement of these pathways in the senescence response, scientists speculate that cancer cells are mostly resistant to induction of senescence.

However, this is not the case: almost all cancer cells can senesce in vitro using DNA-damaging agents or AURK inhibitors, regardless of RB1 and TP53 mutational status. Obviously, these genes only play a regulatory role in tumor cell senescence, and are not necessary factors for inducing tumor cell senescence.

Interestingly, factors secreted by senescent cells, in addition to conveying the “please kill me” message, also have an effect on surrounding cells .

This effect may promote tumor migration and metastasis by promoting epithelial-mesenchymal transition (EMT) .

And to make matters worse, senescent tumor cells can promote tumor growth and metastasis by recruiting specialized macrophages to promote the formation of blood vessels and lymphatic vessels, providing other tumor cells with the oxygen and nutrients they need to survive . 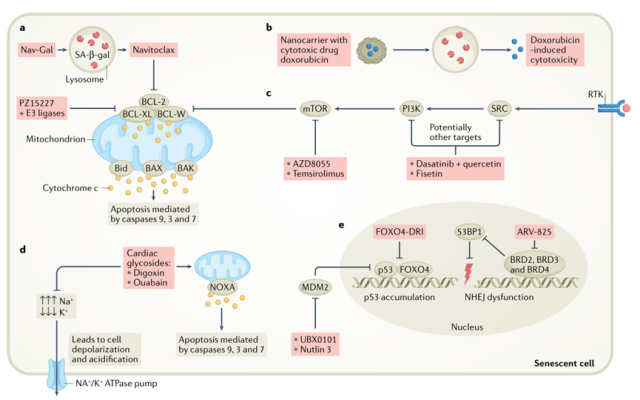 One of the hallmarks of senescent cells is changes in chromatin structure that lead to changes in gene expression .

These changes can affect basic cellular processes, such as the regulation of apoptosis.

These processes may lead to the acquisition of new fragility specific to senescent cells that can be targeted by drugs that act as ” scavengers. ” The table below summarizes the current applications, mechanisms, preclinical evidence and clinical studies of “clearers” in cancer (see table below) . 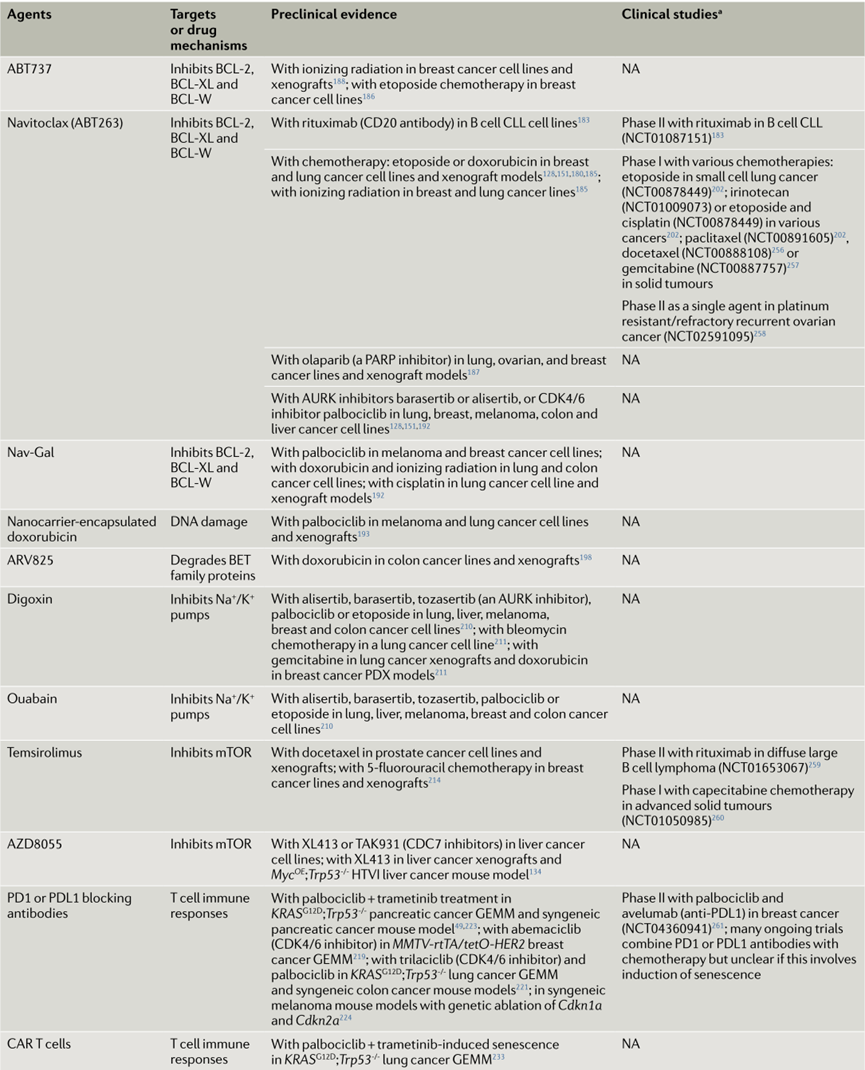 In the journey of anti-aging, clearing senescent cells has received extensive attention as a potential strategy.

However, in the special microenvironment of tumor, senescent cells will also accidentally become “accomplices”, so how to detect, utilize and remove senescent cells is the main direction for future researchers to explore .

Exploring the role of cellular senescence in the treatment of cancer