What are the characteristics of cancer cells that can metastasize to the brain?

“Cell”: What are the characteristics of cancer cells that can metastasize to the brain?

Brain metastases (BrM) refer to a disease in which tumor cells originating in other parts of the body metastasize to the brain, causing tumors to grow in the brain. Brain metastases from lung cancer are the most common, followed by breast cancer and melanoma.

According to statistics, the probability of developing brain metastases in cancer patients is as high as 20%-40% [1]. Even with active comprehensive treatment, the median survival rates of patients with brain metastases at 2 and 5 years are only 8.1% and 2.4%. [2].

Unfortunately, little is known in the medical community about the molecular mechanisms by which tumor cells migrate and colonize the brain , as well as a lack of detailed information on the cellular composition and functional status of brain metastases, which hinders researchers from studying brain metastases. Research in depth. 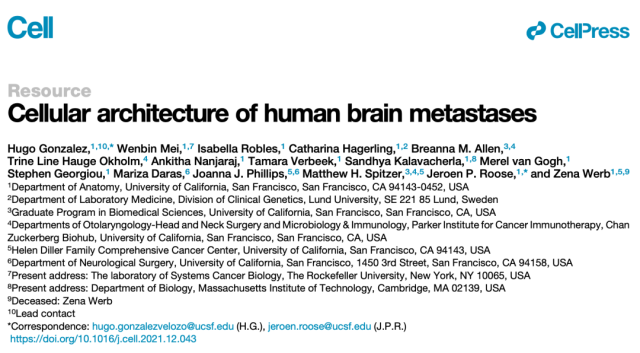 Interestingly, tumor stromal cells from different patients formed multiple aggregated clusters in the dimensionality reduction map (UMAP), while brain metastases cells from each patient formed independent clusters, and the difference between each case was different. There was no overlap, suggesting a high degree of interpatient heterogeneity of brain metastases (Figure 1).

▲ Figure 1 scRNA-seq and CyTOF were performed on brain metastases from 15 patients, dimensionality reduction was performed by UMAP, and cells were annotated

The researchers first analyzed the stromal cells in the tumors and found that they were mainly composed of vascular cells (endothelial and parietal cells), inflammatory immune cells and mesenchymal progenitor cells , and identified 20 distinct clusters based on the expression of marker genes. (figure 2). 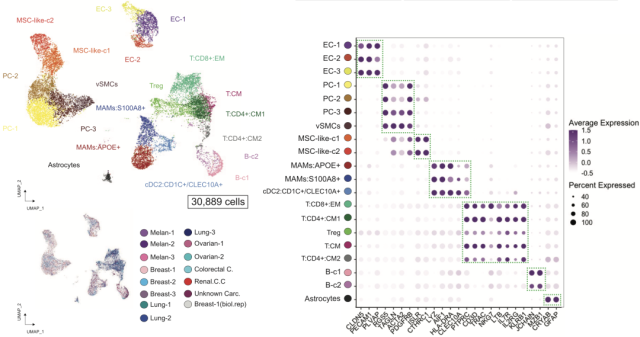 Vascular cells in the stroma constitute the blood-tumor interface (BTI) and are closely related to chemotherapy resistance in patients with brain metastases.

These cells have different immune states and functions. For example, the T:CD8+:EM cluster is rich in cytotoxic molecules (such as GZMA and IFNG), and the T:CD4+:CM cluster represents a high expression of immunomodulatory markers such as LTB and IL32. The T:CM clusters expressing low levels of CD4 and CD8A, although also expressing LTB and IL32, are also enriched for interferon-related genes such as ISG15 and MX1.

To better understand these T cell state and functional transitions, researchers used a nonlinear dimensionality reduction technique to capture the geometric and functional states in high-dimensional data [4]. This analysis showed that the five T-cell clusters were ordered by diffusive component 1 (DC1) fraction.

Among the top 50 genes positively correlated with DC1, there are molecules related to lymphocyte activation (such as CORO1A and LCK), molecules related to chemotaxis and migration (such as CCR7 and CXCR4), and these top 50 DC1 related genes There was a strong correlation between the expression of and the T cell activation gene cluster (GO: 0042110), suggesting that differences in T cell activation status drive T cell diversity. (Figure 4) 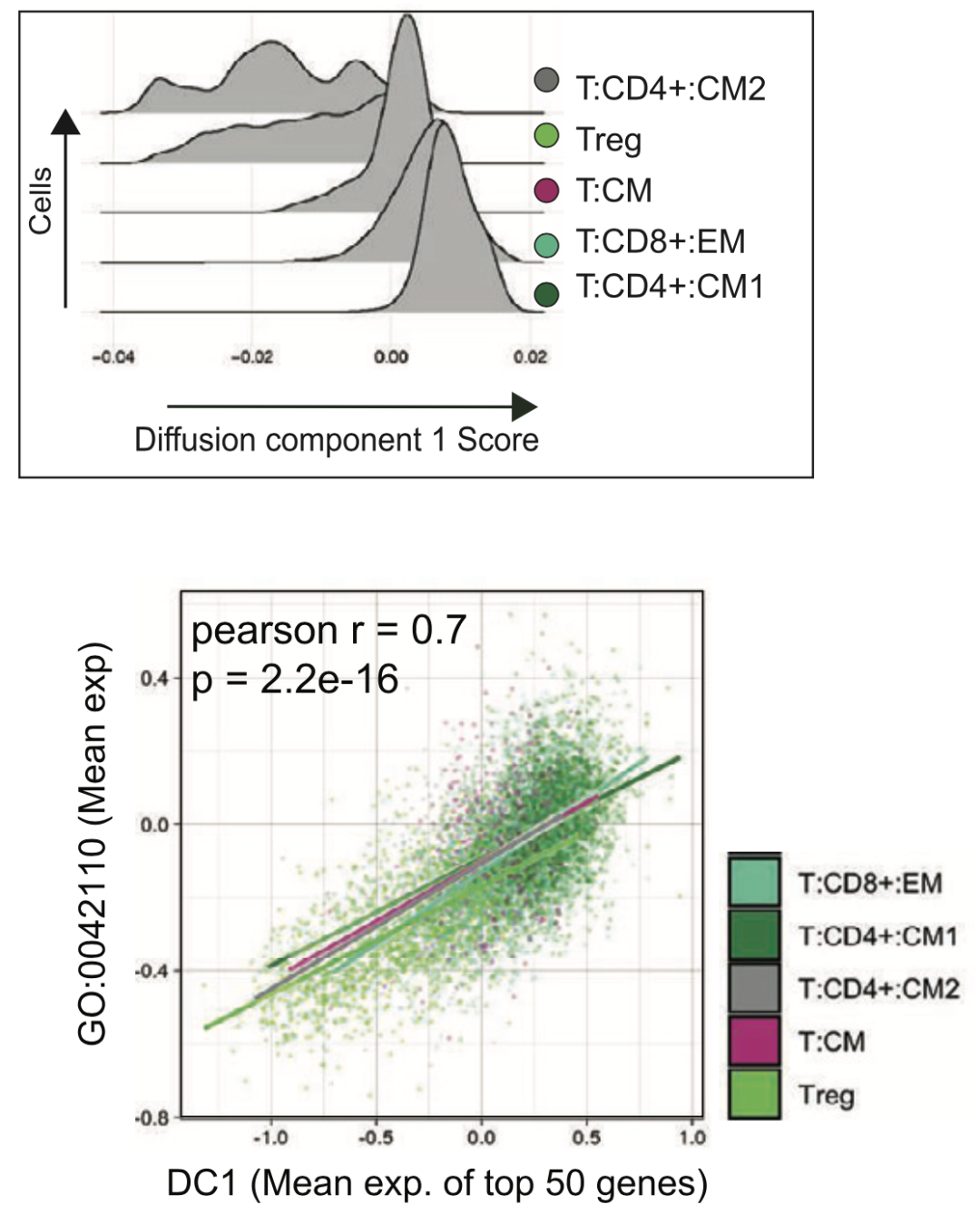 ▲ Fig. 4 The five T cell clusters are ordered according to the diffusion component 1 (DC1) score, and there is a strong correlation between the expression of the top 50 DC1-related genes and the T cell activation gene cluster (GO: 0042110).

To understand the role of each T cell state in relation to the cellular microenvironment, the researchers assessed the expression of genes related to the regulatory microenvironment and metabolism, and found that interferon signaling-related genes dominated the T:Cm cluster and were associated with high T cell activation. Relevant depletion signatures were enriched in the T:CD8+:EM and T:CD4+:CM clusters, whereas those T-cell clusters with lower DC1 scores (T:CD4+:cm2, Treg and T:Cm) showed a strong absence of depletion. functional characteristics.

Furthermore, this phenotypic transition from activated T cells to nonfunctional T cells coincides with a shift in cellular metabolism from predominantly glycolysis and the TCA cycle to predominantly lipid metabolism , revealing that T cells Cell functional state (from activated/depleted to non-functioning), associated with concomitant metabolic and microenvironmental reprogramming.

Finally, the researchers also studied the main body of brain metastases-tumor cells. Through the method of non-negative matrix factorization (NMFS) [5], two types of potential tumor cell subsets were identified, and the external data sets and The same phenomenon was found in animal models of brain metastases: a group of genes related to proliferation and pre-mRNA splicing were highly expressed, and another group of genes related to stress, inflammation, translation and extracellular matrix deposition was highly expressed . The generation of these two types of cell populations is likely related to the extracellular matrix. 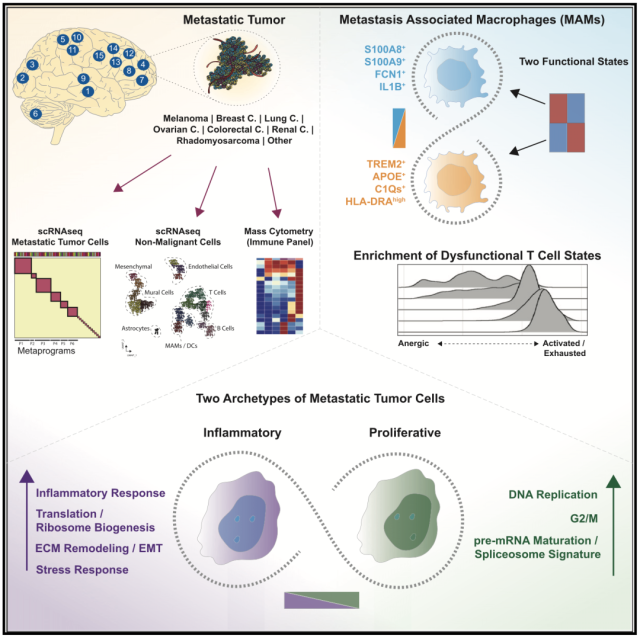 The study also has certain limitations, due to the lack of matching data on extracranial primary tumors, it is impossible to study the differences and associations between brain metastases and primary tumors.

What are the characteristics of cancer cells that can metastasize to the brain?