The brain has a nucleus dedicated to the euphoric sensations caused by food, sex, addictive drugs, etc. It is located in the striatum of the basal ganglia, called the nucleus accumbens .

Studies have shown that a variety of mental disorders, such as autism and depression, are related to the unbalanced output of spiny projection neurons in the nucleus accumbens of the brain.

Spiny projection neurons of the nucleus accumbens express the dopamine receptors Drd1 (D1-MSNs) or Drd2 (D2-MSNs), both of which play key roles in the regulation of neural circuits [1-3].

ACE inhibitors (ACEI), such as captopril, are commonly used antihypertensive drugs in clinical practice and can also improve ventricular remodeling in patients with heart disease.

Previous studies have found that in the dorsal striatum and nucleus accumbens of the brain, ACE can be abundantly expressed under the excitation of D1-MSN, and it is involved in the regulation of excitatory synaptic transmission in the striatum [4-5].

Recently, the team of Professor Brian H. Trieu from the University of Minnesota School of Medicine published their research results in “Science”, they found that ACEI can regulate the level of endogenous opioid peptides in the nucleus accumbens neural circuit, thereby reducing the fen Risk of opioid-addictive behaviors such as tanyl.

How did they come to this momentous conclusion? Let’s find out.

Captopril also had no effect on excitatory synapses in D2-MSNs and adjacent brain regions, and the expression of ACE in both was low. This suggests that D1-MSNs are dopamine receptors in the nucleus accumbens where ACE is primarily responsible.

Subsequently, they also explored whether other ACE inhibitors or analogs caused the above inhibition.

They found that D1-MSNs did not suffer from long-term depression in the presence of valsartan, angiotensin II receptor antagonists, or exogenous angiotensin peptides, suggesting that ACEI analogs do not act through D1-MSNs.

To further explore the potential receptor for captopril’s long-term inhibition, they used naloxone, a common opioid receptor antagonist, to intervene in D1-MSN.

In the presence of naloxone, D1-MSNs did not experience captopril-induced long-term depression, suggesting that this inhibition may be related to opioid receptors.

Next, they explored other potential components involved in captopril long-term depression of D1-MSNs in the nucleus accumbens neural circuit, with the opioid receptor ligand, enkephalin, being the focus of attention.

Met-enkephalin-Arg-Phe (MERF) is an enkephalin with high affinity for opioid receptors, encoded by a constitutive enkephalin-derived gene (Penk), and abundantly expressed in the nucleus accumbens[6-7] .

They quantified the release levels of enkephalins and other neuropeptides after intervening mouse brain slices with captopril and found that MERF released from the nucleus accumbens was higher than that of dorsal striatum tissue.

In addition, they also found a loss of enkephalin signaling in Penk knockout mice, suggesting that Penk is the main source of enkephalin in the nucleus accumbens.

In cell experiments, they found that inhibition of ACE significantly increased MERF release without affecting the release levels of conventional enkephalins or other neuropeptides, and also resulted in long-term inhibition of D1-MSNs.

Other ACEIs, such as trandoprilat, have shown the same results after intervening in nucleus accumbens neurons. Previous studies have verified that D2-MSNs can also highly express Penk [8].

They used the gene mouse brain slices labeled with D2-MSNs to conduct experiments, which further ruled out the interference of D2-MSNs spontaneously releasing MERF.

The experimental results show that only the combination of specific concentrations of captopril and MERF can lead to the synaptic inhibition of excitatory postsynaptic current frequency in D1-MSNs , indicating that the coexistence of both can play a role in synaptic regulation.

They also identified the subtype of opioid receptors responsible for ACE inhibition. Excitatory postsynaptic currents were recorded in D1-MSNs using captopril and threshold MERF in the presence of different selective opioid receptor antagonists.

The experimental results suggest that the mu opioid receptor (MOR) antagonist CTAP can completely block the reduction of excitatory postsynaptic currents ; in addition, cross-breeding experiments with knockout mice found that mice lacking functional MOR did not have D1- The long-term inhibition of MSNs by captopril confirms that the specific opioid peptide receptor for ACE inhibition is MOR.

Finally, they verified it in animal experiments. It has been demonstrated that the rewarding effects of addictive drugs are driven by the activation of D1-MSNs and the enhancement of excitatory synaptic inputs [9]. By using an unbiased local conditioning test, the team of Professor Brian H.

Trieu showed a strong place preference in the environment under the effect of fentanyl, but after captopril injection Preference was significantly attenuated, confirming that captopril counteracted the rewarding effects of fentanyl in mice, while captopril itself did not reward mice or the opposite in positional conditioning experiments.

Additionally, captopril-treated mice had increased social interactions with each other.

Taken together, the research of Prof. Brian H. Trieu’s team demonstrated that ACE can control the synaptic plasticity of nucleus accumbens brain circuits through endogenous opioid peptides, and that ACEI can inhibit the activation of D1-MSNs and excitatory synaptic input, and found that The co-acting enkephalin MERF and the acting opioid receptor MOR, and ACEI can reduce the reward effect of fentanyl-induced mice. 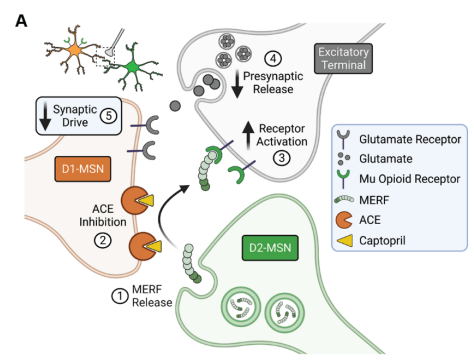 This study suggests that centrally inhibited ACE can control endogenous opioid peptide signaling, resulting in clinical benefits such as reduced risk of addiction. In the future, the discovery of ACEI with central activity is expected to open a new era of brain circuit-specific drug therapy.