In the absence of antiretroviral therapy, administration of anti-HIV-1 broadly neutralizing antibodies (bNAbs) to humans is safe and effective in preventing infection, reducing viremia and maintaining viral suppression of antibody-sensitive viruses.

It has been suggested that broadly neutralizing antibodies could be used as adjuncts to ART or as stand-alone maintenance therapy aimed at inducing long-term ART-free HIV-1 remission.

Recently, researchers from The Rockefeller University published an academic paper titled “Prolonged viral suppression with anti-HIV-1 antibody therapy” in Nature, evaluating the effectiveness of repeated bNAb combination therapy to maintain long-term viral suppression and its impact on Influence of the size and composition of the latent virus reservoir in HIV-infected individuals.

In the present study, researchers conducted a clinical study in which HIV-infected individuals received seven doses of a combination of two broadly neutralizing antibodies, 3BNC117 and 10-1074, over 20 weeks in the presence or absence of ART, Its safety, tolerability and antiviral activity were studied.

The study found that the pharmacokinetic profiles of 3BNC117 and 10-1074 were independent of concomitant antiretroviral drugs during viral suppression and did not change after multiple dosing over 20 weeks.

In the absence of prescreening for antibody susceptibility, 13 of 17 (76%) evaluable cohort 1 subjects remained virally suppressed for at least 20 weeks after ART discontinuation.

The study found that post-hoc sensitivity analyses did not predict when the virus would rebound. In individuals whose virus has been suppressed for more than 20 weeks, rebound viremia occurs when the serum concentration of one of the antibodies reaches below 10 μg·ml−1.

Of those who received all seven antibody doses, two remained suppressed after a year.

Reservoir analysis performed after 6 months of antibody treatment showed changes in the size and composition of the intact proviral reservoir.

In contrast, these individuals did not see a significant reduction in their defect pool. 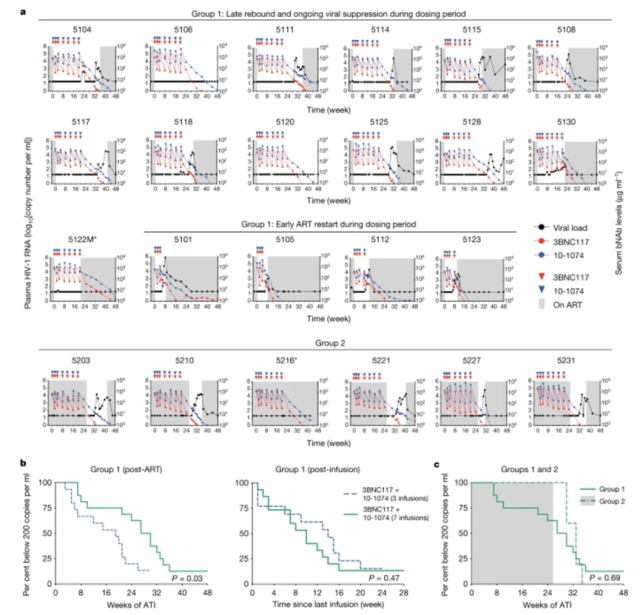 These data suggest that antibody administration affects the HIV-1 reservoir, but more studies, larger and longer, are needed to determine the exact effect of antibody immunotherapy on the reservoir.