AIDS (HIV) is the abbreviation of Acquired Immune Deficiency Syndrome, which is caused by HIV infection. HIV is a virus that can attack the human immune system. It takes the most important CD4+ T cells in the human immune system as the main target, destroys the cells in a large amount, and develops after several years, even up to 10 years or longer incubation period. As a AIDS patient, the body loses its immune function, and multiple infections will occur due to extreme decline in resistance. Malignant tumors often occur in the later stage, and even the whole body fails and died.

According to UNAIDS data, there are currently 38 million people living with HIV and AIDS worldwide, and the number is still growing rapidly.

HIV virus is a kind of retrovirus. Antiretroviral therapy (ART) developed against the reverse transcription process of HIV virus allows AIDS patients to survive for a long time. The therapy cannot completely eliminate the HIV virus in the patient’s body, so it is necessary to adhere to a lifetime period. Taking medicine to suppress the HIV virus in the body, but long-term use of antiretroviral drugs will bring obvious side effects.

The study identified two different ways to enable HIV-infected persons to stop antiretroviral therapy (ART) under medical supervision and control the HIV virus for a relatively long period of about 4 years. This is to help AIDS patients without a lifetime Taking drugs that may have long-term side effects lays the foundation for alleviating the disease.

Researchers monitored the time and extent of HIV rebound in the two of them. One participant suppressed the HIV virus by intermittent rebound for nearly 3.5 years (1250 days), at which time he started taking sub-optimal antiretroviral drugs. , But he did not tell the research team. This intermittent use of drugs may lead to the emergence of drug resistance. The sequencing analysis of the HIV virus in his blood showed that the HIV virus continued to evolve over time, and the original HIV virus reservoir in the body was also reactivated.

Another participant almost completely suppressed the HIV virus for nearly 4 years (1434 days). After that, the HIV virus suddenly rebounded because he was infected with a new HIV strain. This phenomenon is called ” Repeat infection”. 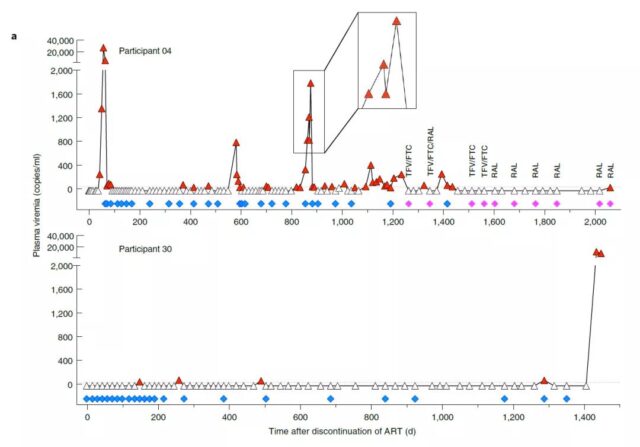 In the first participant, the researchers found that there are high levels of HIV-specific immune cells CD8+ T cells in his body, which are enough to kill cells infected with the HIV virus.

The second participant had weak anti-HIV CD8+ T cells, but he had a very strong neutralizing antibody response throughout the follow-up period until the sudden rebound of HIV in his body.

These findings indicate that two different mechanisms for controlling the HIV virus work on both of them, and that the neutralizing antibody may achieve almost perfect HIV inhibition until he is infected with a different HIV strain again.

Finally, the research team said that the sudden rebound of HIV virus in AIDS patients after stopping treatment is likely to be caused by “superinfection”, especially when the patient has been able to inhibit the HIV virus in the body for a long time.

These findings provide an in-depth understanding of the different mechanisms that control HIV virus levels after discontinuation of antiretroviral therapy in AIDS patients, and emphasize the importance of frequent monitoring of patients’ self-use of therapeutic drugs and reinfection during the discontinuation of treatment.