Bananas are one of the most popular fruits in the world, however, bananas are in danger and we may never eat them again at any time.

The source of this crisis is fungal infection . In 1950, a fungal infection of bananas called ” Panama disease ” broke out, which directly led to the complete extinction of the most widely cultivated banana variety at the time, the Gros Michel .

Scientists have since bred a new variety of the Cavendish banana that is resistant to Panama disease , which now accounts for 99% of all banana sales worldwide.

Bananas at risk of extinction

However, the pathogenic fungi that infect bananas have also been evolving. In recent years, a variant of Panama disease, yellow leaf disease tropical type 4 (TR4) , has emerged.

Once infected with bananas, it will lead to the inability to transport water and nutrients, making banana trees The central part will shrink and turn black, and in 2-3 years, all the bananas in the banana orchard can be completely withered.

The scary thing is that the spores of this fungus can lie dormant in the soil for more than 30 years, fungicides are ineffective against them , and the fungus can spread through water droplets and small amounts of soil attached to machines or shoes.

So once infected, the only way to contain the spread is to destroy all plants on the plantation and shut down the entire plantation for decades .

Due to the widespread cultivation of Cavendish bananas , yellow leaf disease tropical type 4 (TR4), once spread on a large scale, is likely to completely destroy the entire banana farming industry. It is therefore urgent to design and breed a new generation of bananas that are resistant to this disease.

Since the Cavendish banana is triploid, has no seeds and can only be propagated by cloning, it cannot be conferred disease resistance to yellow leaf disease tropical type 4 (TR4) by traditional breeding methods .

Therefore, there may be only one way to save bananas from the fungus, and that is to modify its genome to confer resistance to yellow leaf disease tropical type 4 (TR4) .

Why can’t we lose bananas?

Bananas are one of the most popular fruits in the world, and people around the world eat more than 100 billion bananas every year.

The entire banana industry is a $25 billion industry on which millions of people depend. There are also more than 4 million people who eat bananas as their staple food.

Therefore, bananas are not only a fruit, but also the basis for many people to survive, which is also an important reason why we cannot lose bananas. 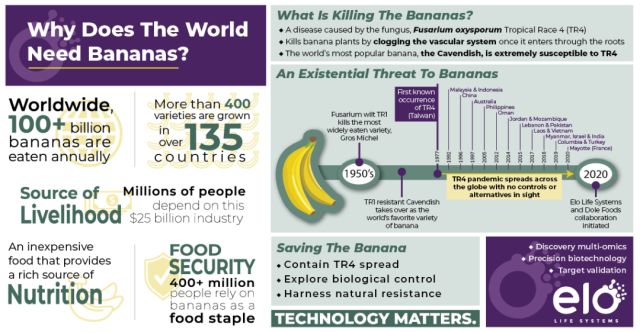 The emergence of gene editing technology has opened up a new world for breeding. The DNA sequence of banana susceptible to yellow leaf disease tropical type 4 (TR4) , or the gene that resists infection can be found, and targeted gene editing, deletion or insertion of specific DNA can be carried out. sequence, resulting in infection-resistant bananas. Moreover, the whole process is much faster than conventional breeding. 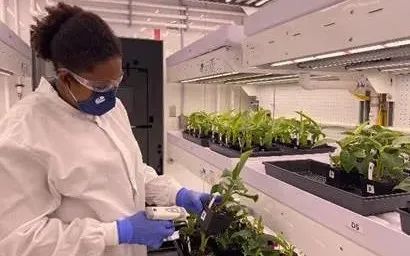 In addition to bananas, Elo Life Systems is conducting several studies to improve the health and taste of food, such as gene editing to reduce saturated fatty acids in canola, resulting in healthier cooking oils ; gene editing to develop sweeter but lower Calorie-free watermelons ; and more climate-tolerant food crops , and more.