Preclinical models have demonstrated that GIP reduces food intake and increases energy expenditure, resulting in weight loss. And when GIP is used in combination with a GLP-1 receptor agonist, it may have a greater effect on patient blood sugar and body weight.

The approval is based on positive results from the Phase III SURPASS program, a large Phase III program consisting of 10 clinical trials planned to enroll more than 13,000 patients with type 2 diabetes, five of which are global registry studies.

These include activity-controlled studies with semaglutide 1 mg, insulin glargine, and insulin degludec. These studies evaluated Mounjaro (5mg, 10mg and 15mg) alone or in combination with commonly prescribed diabetes medications including metformin, SGLT2 inhibitors, sulfonylureas and insulin glargine. In the SURPASS program, the 5mg dose of Mounjaro reduced subjects’ A1C by an average of 1.8%-2.1%, and the 10mg and 15mg doses reduced subjects’ A1C by an average of 1.7%-2.4%. 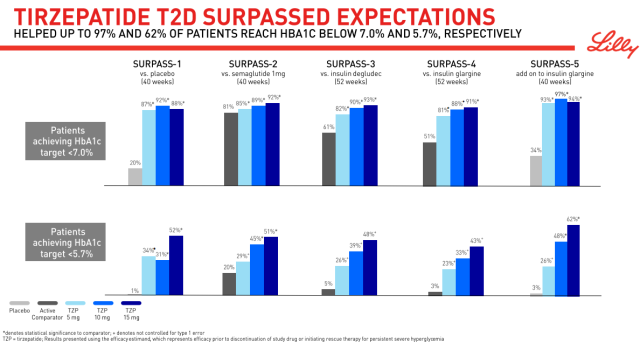 In addition, Tirzepatide has also achieved success in weight loss. Recently, in the Phase III SURMOUNT-1 trial, the weight loss effect of tirzepatide (5mg, 10mg, 15mg) treatment group was significantly better than the placebo control group at week 72 , the average weight loss reached a maximum of 22.5% (24kg), and 63% of patients in the 15mg high-dose group lost more than 20% of their weight. Lilly said it will discuss with the FDA and seek regulatory approval for this indication.