Why can mushrooms with hallucinogenic effects treat depression?

Why can mushrooms with hallucinogenic effects treat depression?

Psilocybin, also known as psilocybin, is a neurotoxin with hallucinogenic effects. In the clinical trial described in this article, psilocybin showed antidepressant potential compared with the escitalopram-administered group [1] .

However, the underlying pathological mechanism of this disease has not been elucidated.

Not only is depression often accompanied by anxiety disorders, but it is also strongly associated with dementia, type 2 diabetes, coronary artery disease, Parkinson’s disease, epilepsy, pain, and cancer. Unfortunately, the chronic effects of depression complicate the prognosis of many chronic diseases to the detriment of the world’s public health.

Therefore, we urgently need to find effective antidepressant drugs to improve this problem. psilocybin(see picture 1)Derived from a family of mushrooms known as “magic mushrooms,” which have been used in historical records to induce hallucinations.

However, some recent studies have shown that it is promising for the treatment of MDD, obsessive-compulsive disorder and tobacco addiction [3] . 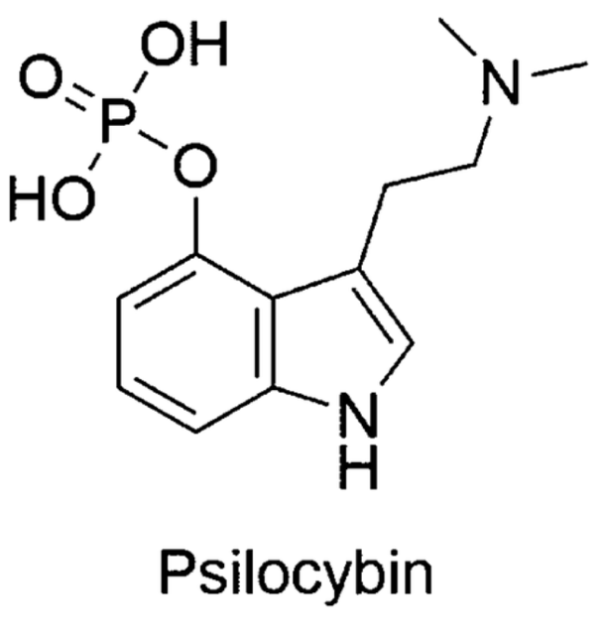 Two-group clinical trial of psilocybin in the treatment of depression

After follow-up treatment, the imaging results demonstrated the antidepressant effect of psilocybin for the first time, and it has the characteristics of rapid treatment .

One day after psilocybin administration, brain modularity was reduced in TRD patients (see Figure 2a) ; implying an increase in overall network functional connectivity within the brain.

And through the Pearson correlation test, it showed that the long-term improvement of depressive symptoms was significantly correlated with the reduction of brain modularity (see Figure 2b,c) .

The second double-blind, randomized, controlled, safety-validated clinical trial recruited 59 patients with MDD, and 22 patients were finally included in the psilocybin administration group; 21 patients were included in microcrystalline cellulose (a type of Pharmaceutical excipients) capsules of placebo, or the traditional antidepressant escitalopram administration of the control group.

The results showed that brain modularity was reduced after 1 day of psilocybin administration, but not significantly after escitalopram administration, confirming the authors’ main hypothesis (see Figure 3a, Figure 3d) .

Also, there is a correlation between changes in brain module networks after psilocybin treatment and BDI scores(see Figure 2b); Changes in the EN region, with strong correlations with other frontal networks(see Figure 3c). However, there was no significant correlation in the escitalopram-administered group. 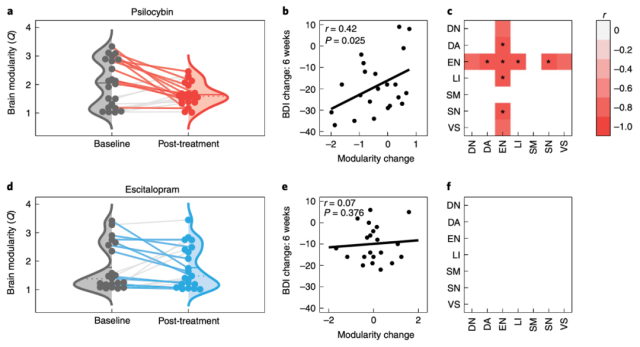 Depressed patients will keep thinking about the same problem over and over again, immersed in negative and unsolved problems, and generate a lot of negative emotions.

Serotonin is an important neuromodulatory transmitter with a unique ability to shape synapses.

Synapse formation is a well-known key mechanism for learning and memory, and synaptic dysfunction caused by neuronal atrophy and cell death is the pathological basis of depression [6] .

These drugs are highly selective for serotonin and have little effect on adrenergic, dopamine, histamine and cholinergic nerves, and are suitable for various types of depression.

Treatment with psilocybin appears to increase the brain’s ability to interconnect higher-order functional areas. The effect of psilocybin to open up the “Ren and Du two meridians” is consistent with the “emotional release” of patients’ subjective feedback.

This enhanced “emotional release” effect may be unique to psilocybin therapy compared to SSRIs. The effects of psilocybin on cerebral cortical activity appear to be induced by direct stimulation of serotonin receptors in the cerebral cortex. 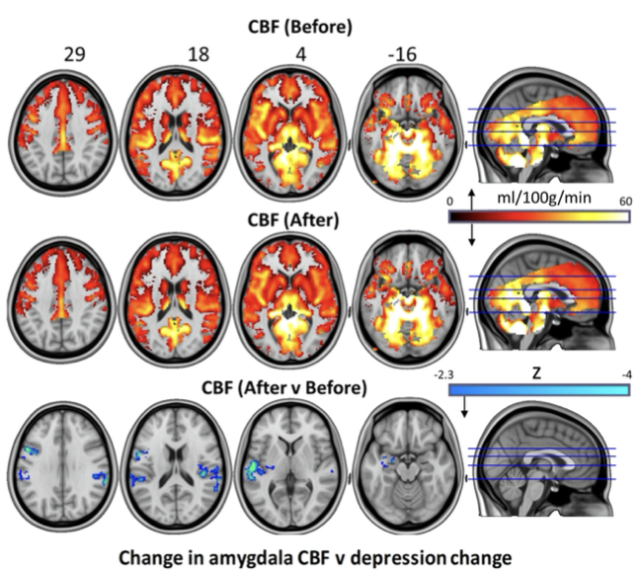 While this finding is encouraging, the current trials of psilocybin for depression are conducted in controlled clinical settings, with tightly controlled doses and doses of There are mental health experts to provide complete psychological counseling services.

Therefore, people with depression should not try psilocybin for treatment on their own. Taking hallucinogenic mushrooms or psilocybin privately without careful clinical trial safeguards will not have a positive effect on disease.

This result may help explain why psilocybin therapy holds promise as a new option for depression treatment.

Why can mushrooms with  hallucinogenic effects treat depression?