Depression is mainly manifested by symptoms such as low mood, decreased interest, slow thinking, poor diet and sleep. According to the World Health Organization (WHO), more than 350 million people worldwide suffer from depression, which has become the fourth largest disease in the world, and the number of patients is still growing rapidly [1].

More notably, more than 700,000 people commit suicide every year because of depression. However, the current social awareness of depression is far from enough.

There are also many people who equate depression with the negative emotions that come with being frustrated in life, unaware that it is a serious illness.

In addition, many people with depression delay their illness because they are not properly diagnosed.

Recently, researchers from the research group of Andreas Walther of the Technical University of Dresden in Germany published important research results in the journal Translational Psychiatry [2].

Among them, lymphocytes, monocytes and neutrophils are the immune cells most affected by depression .

For the first time, the study found elevated deformability of immune cells in people with depression .

This change in the mechanical characteristics of immune cells suggests that depression is related to a sustained immune response in the body.

Precisely regulating the deformability of immune cells in patients with depression may be a new idea for the treatment of depression in the future .

The pathophysiological mechanisms of depression have not been elucidated until today.

Hyperactivation of the hypothalamus-pituitary-adrenal axis (HPA) and chronic low-grade inflammation are currently the two most recognized pathophysiological features associated with depression [3].

Many studies have found elevated levels of cortisol and pro-inflammatory cytokines in patients with depression, suggesting that depression is associated with activation of the immune system.

Studies in recent years have also confirmed that in the peripheral blood of patients with depression, various types of immune cells are significantly increased [4].

However, there is no direct evidence that patients with depression have abnormal immune cell function .

Inside the cell, there is an extremely complex network of protein fibers called the cytoskeleton.

Finally, the researchers took a 20 μl blood sample from the fingertips of the participants, and tested the deformability of blood cells with the help of a real-time cell deformability counter (RT-DC) (see Figure 1) to obtain the cell size and deformation rate of each cell type. . 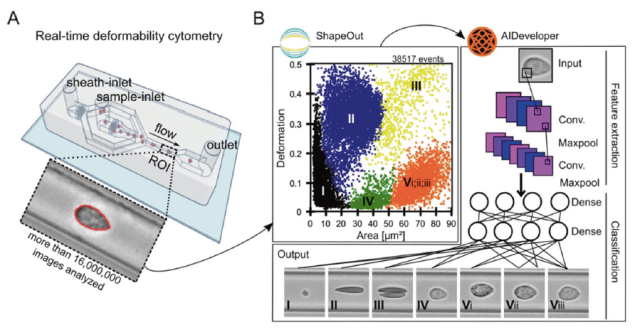 The results of the cytometer showed that the deformability of monocytes, granule-monocytes and neutrophils was significantly increased in the lifelong persistent depressive disorder group compared with the control group (see Figure 2); 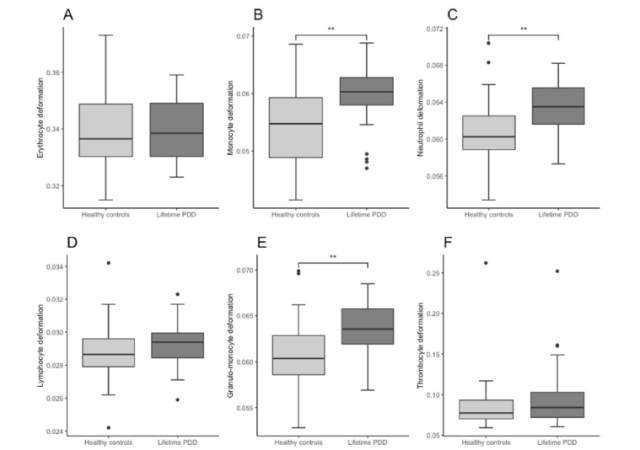 In order to confirm the correlation between the severity of depression and the enhancement of blood cell deformability, the researchers conducted a partial correlation analysis between each depression group and the control group, adjusting for age, gender, body mass index, and psychotropic drug factors (see Figure 3). .

Figure 3. Correlation between PHQ-9 score and blood cell deformability in each group

So far, we can clarify that depression is associated with increased deformability of peripheral blood immune cells.

It is worth thinking about, why does this happen to the immune cells of depressed patients? The researchers speculate that this may be related to hyperactivation of the HPA axis and chronic low-grade inflammation .

Lipids are an important component of cell membranes, and disturbance of lipid formation means that the stability of cell membranes may be reduced, thereby exhibiting increased cell deformability [7].

The present study is the first to assess the association between depression and cellular deformability of major blood cell types, clarifying the impact of depression on the mechanical characteristics of primary immune cells.

The researchers used a high-throughput real-time cell deformability counter combined with artificial intelligence image processing to provide the highest level of validity and reliability for clinical assessment of depression.

Of course, the limitations of the study are also obvious. The enrolled participants were not newly diagnosed patients who had never taken antidepressants, and the potential impact of drugs on cell deformability should not be underestimated.

In addition, the proportion of males was low, and there was a selection bias in terms of sex.

Changes in cellular mechanical characteristics are closely related to pathological processes and physiological functions, and the increased deformability of immune cells in patients with depression provides new insights into the pathophysiological mechanisms of depression.

The precise regulation of the mechanical characteristics of immune cells may become a new idea for the treatment of depression in the future.

[1]. World Health Organisation (WHO). Depression and other common mental disorders