Tumor initiation depends on the reprogramming of cellular metabolism. A common feature of tumor cell metabolism is the ability to obtain essential nutrients from a nutrient-poor environment and use these nutrients to maintain viability and generate new biomass.

Changes in intracellular and extracellular metabolites can have profound effects on gene expression, cell differentiation, and the tumor microenvironment along with tumor-associated metabolic reprogramming.

There are six main characteristics of changes in tumor metabolism, but only a few tumors exhibit these six characteristics at the same time. According to the specific characteristics exhibited by tumors, it may help to better guide tumor classification and treatment . 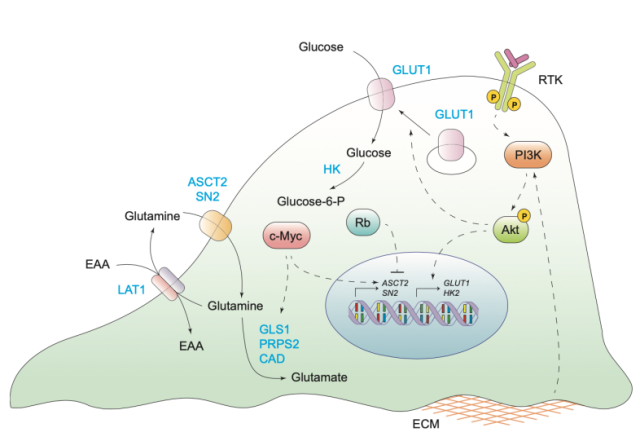 The two main nutrients that support survival and biosynthesis in mammalian cells are glucose and glutamine .

Through the catabolism of glucose and glutamine, cells maintain a mixed pool of various carbon intermediates that are used As the cornerstone of various macromolecular assembly.

In the 1950s, American physiologist Harry Eagle first described the phenomenon of high demand for glutamine by proliferating tumor cells. He proved that the optimal growth requirement of HeLa cells was 10-100 times more than other amino acids.

The PI3K/Akt signaling pathway is a major regulator of glucose uptake , which can increase the transcription level of the glucose transporter GLUT1 and promote the translocation of the GLUT1 protein from the intracellular membrane to the cell surface to function.

Furthermore, Akt can enhance the activity of hexokinase (HK), which phosphorylates glucose molecules, preventing their reflux into the extracellular space, and phosphofructokinase (PFK), which is a key irreversible step in catalyzing glycolysis, It is also the rate-limiting step of glycolysis.

However, the PI3K/Akt signaling module is not the only means by which tumors promote glucose uptake. Other oncogenic signaling proteins, such as Ras, have been found to upregulate GLUT1 mRNA expression and increase cellular glucose consumption.

In addition to positive regulation from c-myc, glutamine uptake is also negatively regulated by the Rb family of tumor suppressor proteins, and deletion of Rb family proteins has been shown to enhance glutamine uptake through E2F-dependent upregulation of ASCT2 and GLS1 and use.

For any one cell, trying to proliferate without proper metabolic resources can end in disaster. 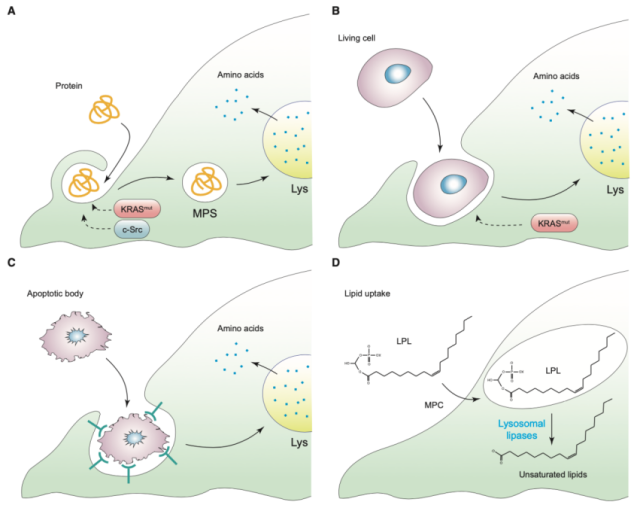 Despite the strong uptake of glucose and amino acids by tumor cells, tumor cells in vivo often encounter nutrient deficiencies due to increased nutrient consumption rates and insufficient tumor vascular supply.
To address the depleted supply of normal anabolic precursors, certain cancer types acquire specific mutations that activate the cell’s ability to use other pathways to obtain essential nutrients.

Plasma and interstitial fluid are rich in soluble proteins, but extracellular proteins are generally not a source of amino acids.

Expression of mutated Ras or c-Src alleles provides a mechanism for cells to meet the need for free amino acids by degrading extracellular proteins through lysosomes, in contrast to low-molecular-weight nutrients entering cells through transporters The uptake of extracellular macromolecules is via macropinocytosis, in which large amounts of extracellular fluid are taken up into giant vesicles.

Notably, although the PI3K/Akt signaling pathway can stimulate the uptake of low molecular weight nutrients, it does not promote the utilization of extracellular proteins.

Interestingly, tumor cells harboring KRAS allele mutations are more prone to entosis, so KRAS mutant cells not only have a nutritional advantage over non-mutated cells, but also actively eliminate the latter , a property that may promote cells within tumors. competition, leading to the emergence of more aggressive cell populations.

A consequence of the lack of vascular nutrient delivery during tumor growth is tumor hypoxia , which results in the inhibition of many biosynthetic reactions that require oxygen molecules as electron acceptors .

To replenish the missing fatty acids, hypoxic cells from surrounding The environment introduces “off-the-shelf” unsaturated fatty acids in the form of lysophospholipids with monoacyl chains. 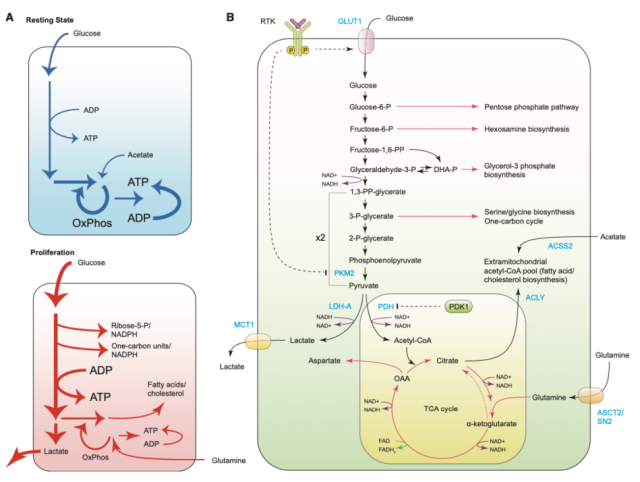 Cell proliferation not only increases the amount of nutrients the cells need, but it also changes how the nutrients are used.

The carbon usage pattern of proliferating cells is very different from that of resting cells, and the main use of reducing carbon during cell proliferation is to synthesize various biomolecules, including fatty acids, cholesterol, pentose and hexose derivatives, Glycerol, nucleotides, and non-essential amino acids, so proliferating cells must first convert the obtained nutrients into various intermediate structures including cytoplasmic acetyl-CoA, one-carbon folate cycle units, and S-adenosylmethylsulfide amino acid (SAM), as well as a series of glycolytic and TCA cycle intermediates.

In addition, many biosynthetic reactions are reductive in nature and thus require a source of reducing power, for example, 14 reducing equivalents are consumed to generate palmitic acid, while 26 are required to generate cholesterol molecules.

The designated donor of reducing equivalents for cellular biosynthetic reactions is NADPH, and the production of NADPH from NADP+ is accomplished by the controlled oxidation of carbon groups, which is quite different from those that produce NADH to support the mitochondrial electron transport pathway.

Therefore, proliferating cells must allocate a portion of the carbon substrate for NADPH production.

This The answer to the question gradually became clear. Cells in the proliferative state have far less demand for ATP than for some molecular precursors and NADPH.

Glucose catabolism is a powerful provider of these precursors and reducing substances, while the TCA cycle that produces NADH and ATP is glucose metabolism. 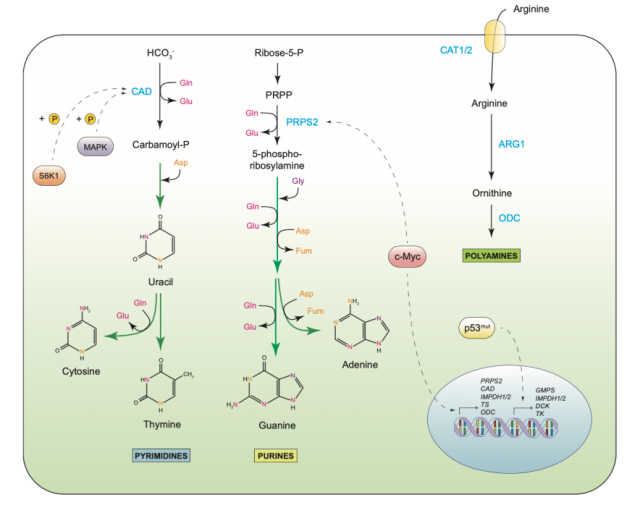 Furthermore, the assembly of both the pyrimidine and purine rings utilizes aspartate, which is derived from the transamination of TCA cycle metabolites oxaloacetate and glutamate, both of which are glutamate A breakdown product of aminoamides, thus glutamine is a key structural component of nucleotide biosynthesis.

Correspondingly, glutamine levels have been shown to be the rate-limiting condition for cell cycle progression, and in certain cellular contexts, glutamine deprivation leads to cell cycle arrest in S phase.

In addition to its use in nucleotide biosynthesis, glutamine can also be directly deaminated to glutamate by glutaminase, which is frequently upregulated in cancer cells in a c-myc-dependent manner, and glutamine The derivatized glutamic acid acts as a nitrogen donor through transamination to produce many non-essential amino acids.

Although arginine is a non-essential amino acid, it is also essential under certain tumorigenic conditions.

Arginine is a carrier of four nitrogen atoms and is a precursor for a variety of nitrogen-containing compounds, including polyamines, creatine, agmatine, and pyrroline-5-carboxylate, a precursor for the biosynthesis of proline.

Tumor cells do not select for de novo production of arginine, but rely primarily on exogenous influx of arginine. It is clear that, similar to carbon metabolism, nitrogen metabolism undergoes complex reprogramming during tumorigenesis. 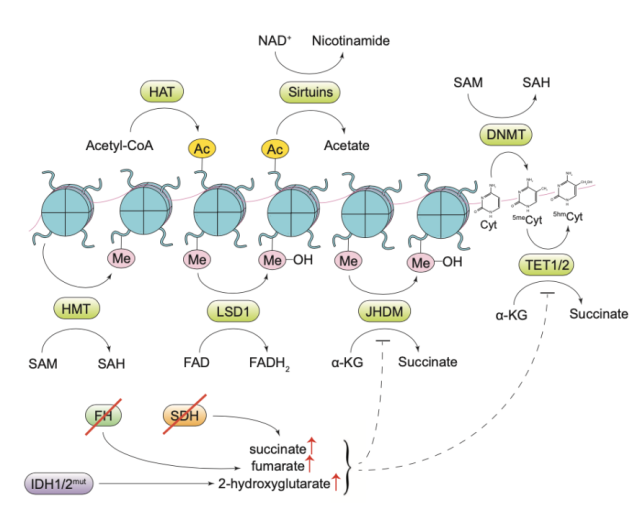 Yet the metabolic network itself is not just passive receivers of growth signals, but on the contrary, it directly transmits information about the metabolic state of cells to various regulatory enzymes , including those that add or remove epigenetic marks in chromatin.

The metabolite cytosolic acetyl-CoA begins to play a critical role when cells metabolize more glucose than is required for bioenergetic support.

Cytoplasmic acetyl-CoA is an obligate substrate for enzymes that acetylate histones and other proteins.

Histone acetylation marks are associated with increased accessibility of genomic DNA to transcriptional complex assembly, and histone acetylation is highly sensitive to changes in cellular nutrition and signal transduction states.

In addition to acetyl-CoA, p300 histone acetyltransferases have also recently been shown to utilize crotonyl-CoA as a substrate, and it is worth noting that crotonyl-tagged modifications at specific amino acid residues in the histone tail were more able to activate gene expression .

SAM is a product of a one-carbon metabolic pathway powered by serine catabolism, and several recent studies have shown that histone and DNA methylation is very sensitive to changes in SAM levels .

6.  Metabolic interactions with the tumor microenvironment 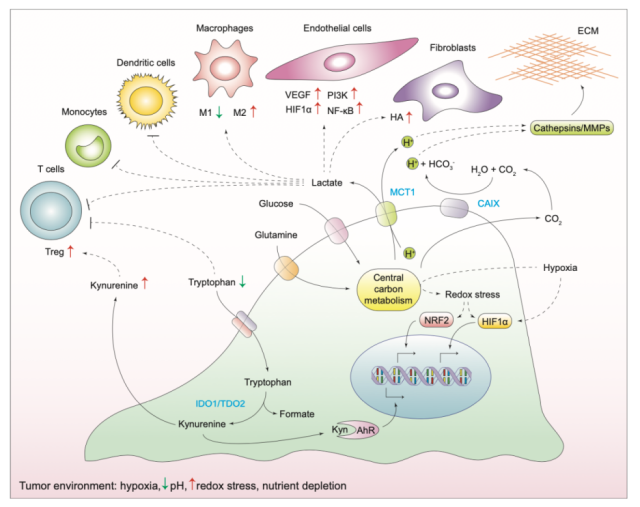 Information about a cell’s metabolic state not only influences its own long-term decisions , but also has the potential to influence the fate of other cells in its vicinity .

How tumor cells reprogram their microenvironment to aid tumor growth and dissemination is an area worthy of intensive study , but it is clear that this reprogramming involves multiple strategies, including secretion of growth factors, alteration of the extracellular matrix, and cell-to-cell interactions Wait.

Some tumors employ a unique strategy to promote the emergence of an immune tolerance microenvironment around them .

Conversely, the tumor microenvironment has profound effects on the metabolism of cancer cells themselves .

Tumors often face a nutrient and oxygen-deficient environment and develop strategies for nutrient acquisition to circumvent these limitations.

Conductive and transcriptional programs, together , the interaction between tumor cells and their microenvironment exert a selective pressure that further shapes tumor cell metabolism and contributes to the emergence of more aggressive tumor cells.