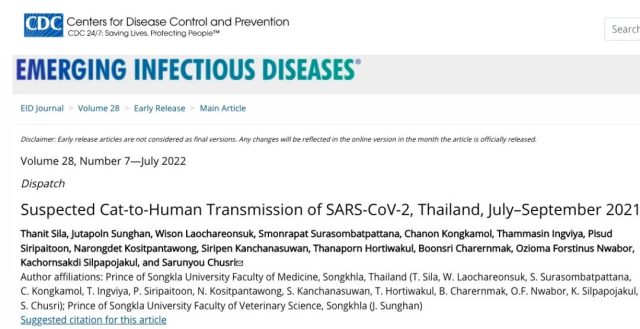 On August 15, 2021, a 32-year-old female patient A in Songkhla, Southern Province of Thailand, presented with a fever, runny nose and cough.

Patient A, a veterinarian, examined a cat 5 days earlier with two other veterinarians (patient E and patient F).

The owners of the cats are two males (patient B and patient C), both from Bangkok, father and son, who were previously diagnosed with the COVID-19 on August 7.

On August 8, patients B, C and the cat were taken by ambulance to the Affiliated Hospital of Prince Songkhla University and entered the isolation ward.

During the nasal swab sampling, the cat sneezed on Patient A’s face.

Patient A developed symptoms three days after contact with the cat. On August 15, the cat’s RT-PCR test showed positive for COVID-19. Subsequently, patients A, B, C and the cat were sent to hospital for isolation. Swab samples from patients E and F tested negative.

There are no other infected persons in patient A’s close contact.

Among the 30 staff members of the same veterinary hospital, there is also 1 person (patient G) who had a history of exposure to the COVID-19, but he had started to have a fever the day before the cat arrived, reported positive for the COVID-19 on August 13, and had no contact with the cat and patient A. , E, F have direct or indirect contact.

Timeline of the whole case

Source: Screenshot of the paper 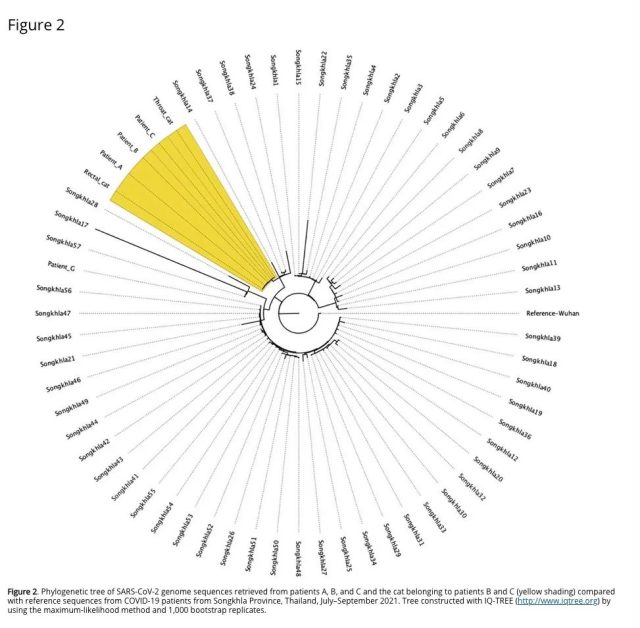 Source: Screenshot of the paper

The researchers believe that since patient A had no previous contact with patients B and C, the most likely situation was that he was infected when he came into contact with cats.

The researchers confirmed that the gene sequences of the viruses infected by patients A, B, and C were different from those of patient G and other viruses circulating in the same province.

Source: US Centers for Disease Control and Prevention

The paper argues that although direct or indirect exposure to pollutants is also a potential route of infection for Patient A, these routes are less likely because she wears gloves and washes her hands before and after examining the cat.

The researchers detected a relatively low RT-PCR cycle threshold from cat nasal swabs, indicating a high viral load and contagiousness. Since Patient A is wearing an N95 mask, but no face shield or goggles, her exposed ocular surface is vulnerable to droplets from the cat’s sneeze.

The paper argues that patient A’s infection indicates the possibility of ocular transmission, as well as wearing protective glasses or face shields in addition to masks when in close contact with high-risk humans or animals.

The paper also mentions that the incidence of cat-to-human transmission is relatively uncommon because cats shed live virus for a short period of time (average 5 days).

Nonetheless, to prevent transmission of COVID-19 from humans to cats, persons with suspected or confirmed COVID-19 should avoid contact with cats; caregivers are advised to exercise face and eye protection when interacting closely with cats that are suspected of being infected.

This latest paper from Thailand is from Emerging Infectious Diseases and will be published in the July issue. It is currently the Early release version.

If there is any modification, the official release version will prevail.

In this case, Scott Weese, an infectious disease expert at the University of Guelph in Ontario, Canada, said in the New York Times that there is no need to worry about this situation, because the frequency of new coronavirus transmission from humans to cats is much higher than that of cats. , but the study highlights the need to isolate infected animals.

“If a household does nothing to isolate infected and uninfected people, the presence of cats is not important as human-to-human transmission is more likely; Isolate the cats at the same time,” Scott Weese said.