Offspring of elderly fathers are prone to mental illness, NTU researchers reveal that miRNA dysregulation in sperm may be a key factor.

In recent years, delayed childbearing has become an increasingly common trend, which has raised concerns about the health of offspring at advanced age.

It has been reported that fathers giving birth at an advanced age may lead to some psychiatric disorders in offspring , including autism, schizophrenia, and bipolar disorder, but the underlying molecular mechanisms remain unclear.

There is growing evidence that our life experiences, external stimuli and dietary habits are epigenetically “imprinted” in our germ cells, which then influence offspring phenotypes through generational inheritance.

Recent studies have shown that non-coding small RNAs in sperm are a new type of carrier that regulates the intergenerational inheritance of paternal phenotypes (such as mental stress and metabolic disorders) .

During fertilization, sperm are able to transmit a range of different kinds of small RNAs into egg cells.

It may even lead to a series of behavioral and physiological changes in offspring as adults.

However, it is unclear whether sperm miRNAs are affected by age and mediate the inheritance of psychiatric disorders in offspring.

On July 05, 2022, the team of Chen Xi / Wang Yanbo / Yao Bing from Nanjing University and Feng Zhichun from the General Hospital of the Chinese People’s Liberation Army jointly published an online publication in the journal Cell Discovery entitled: microRNAs in aged sperm confer psychiatric symptoms to offspring through causing Research paper on the dysfunction of estradiol signaling in early embryos .

This study uncovers a novel mechanism by which microRNAs in sperm of older men lead to psychiatric symptoms in offspring by triggering dysfunction of the estradiol signaling pathway in early embryos.

First, in order to detect whether there is intergenerational inheritance between male fertility at advanced age and offspring mental disorders, the research team bred 12-14-month-old male mice and 8-week-old control male mice with 8-week-old female mice.

The offspring mice (F1 generation) were obtained , and the adult F1 generation was screened for mental behavior (such as anxiety, social disorder and depression, etc.) ; There was no significant difference; however, after mild stress stimulation, the F1 generation mice in the older group showed obvious anxiety and social disorder-like behavioral characteristics.

These results suggest that male fertility at advanced age may indeed affect offspring through intergenerational inheritance, increasing the risk of offspring suffering from psychiatric disorders.

Further, the research team found through sequencing that the sperm microRNA profiles of aged male mice changed significantly compared with control male mice, among which microRNA (miRNA) changes were the most significant.

Finally, in the mechanism study, the research team found abnormalities in the estradiol signaling pathway in early embryos based on single-cell sequencing.

Bioinformatics prediction combined with molecular biology experiments proved that the significantly up-regulated miR-9-5p in advanced sperm may be inhibited by The expression of GPER1 , a key receptor in the estradiol signaling pathway, in turn leaves an abnormal imprint in the estradiol signaling pathway, leading to cascading changes in gene expression regulatory networks in early embryos and adverse effects on nervous system development, ultimately leading to The offspring exhibited anxiety and social impairment phenotypes in adulthood. 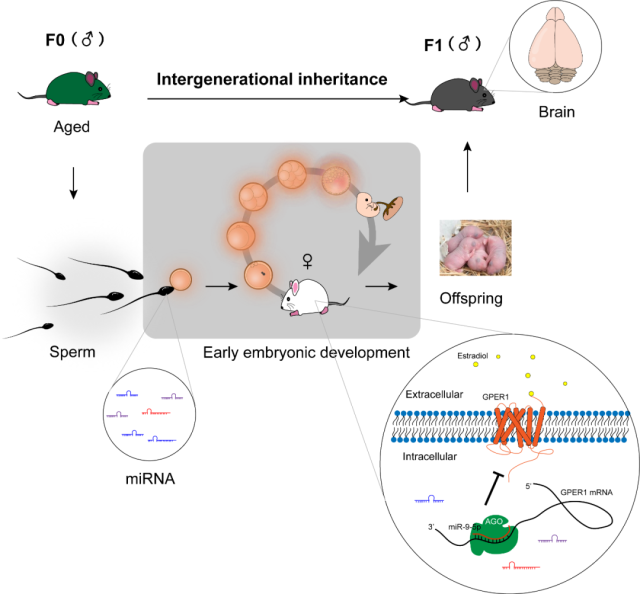 Taken together, this study found that miRNAs in the sperm of aged male mice lead to psychiatric phenotypes such as anxiety and social impairment in offspring by triggering dysfunction of the estradiol signaling pathway in early embryos .

This finding is of great significance for explaining the molecular mechanism of the mental disorders of offspring caused by male fertility at an advanced age, and also provides a new perspective for the study of the genetic laws of mental diseases.

The policy of preventing possible health risks in offspring and maintaining prenatal and postnatal care provides a certain theoretical basis.