Why does exercise prevent insulin resistance?

In a new study, researchers from Australia’s Monash University have discovered that an enzyme called NADPH oxidase 4 (NADPH oxidase 4, NOX4) is the key to improving our health through exercise.

Importantly, the discovery opens up the possibility of developing drugs that boost the activity of this enzyme in order to protect people from the effects of aging on metabolic health.

The results of the study were published in the journal Science Advances on December 15, 2021, with the title “Skeletal muscle NOX4 is required for adaptive responses that prevent insulin resistance”. 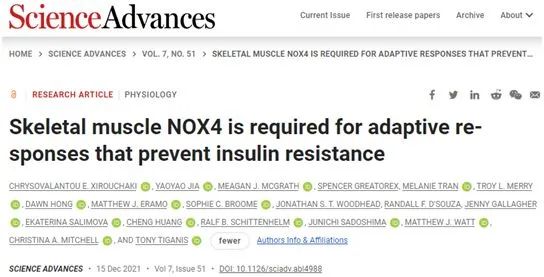 One of the main reasons why the incidence of type 2 diabetes increases with age is insulin resistance—the inability of the body to respond to insulin, often as a result of a reduction in physical activity with age of. However, the exact mechanism by which inactivity promotes insulin resistance has been a mystery.

In the new study, the authors discovered how physical activity actually enhances insulin responsiveness and, in turn, promotes metabolic health.

Importantly, the enzymes they identified that are critical to this mechanism could potentially be targeted with drugs to stop the consequences of aging, such as muscle wasting and diabetes .

These authors reveal that the reduction in skeletal muscle reactive oxygen species (ROS) production during aging plays an important role in the development of insulin resistance.

According to the paper’s corresponding author, Professor Tony Tiganis from Monash University’s Biomedical Discovery Institute, ROS are constantly produced by skeletal muscle and increase during exercise. “Exercise-induced ROS drives adaptive responses that are integral to the health-promoting effects of exercise,” he said.

In this paper, Tiganis and team show how an enzyme called NOX-4 is critical for exercise-induced ROS and adaptive responses that drive metabolic health.

In mice, the authors found that NOX4 is increased in skeletal muscle after exercise, which then leads to increased ROS, triggering an adaptive response that protects mice from insulin resistance that otherwise occurs with aging or diet-induced obesity Insulin resistance.

Importantly, these authors found that NOX4 levels in skeletal muscle were directly associated with age-related declines in insulin sensitivity.

“In this study, we found that, in animal models, the abundance of NOX4 in skeletal muscle decreases with aging, which leads to a reduction in insulin sensitivity,” said Professor Tiganis.

He said, “Triggering the activation of NOX4-coordinated adaptive mechanisms with compounds may improve key aspects of aging, including insulin resistance and the development of type 2 diabetes . One of these compounds is naturally occurring, for example, in cruciferous vegetables. , such as broccoli or cauliflower, although the amount required for anti-aging effects may exceed what many people are willing to consume.”

Why does exercise prevent insulin resistance?