Spinal anesthesia may lead to increased pain after surgery

Spinal anesthesia may lead to increased pain after surgery.

Spinal anesthesia has replaced general anesthesia in some procedures as a way to improve patient comfort and reduce the need for pain medication.

However, studies in patients with hip fractures suggest that this modification may have the opposite effect than expected.

The study, published recently in the journal Annals of Internal Medicine, was conducted by researchers at the Perelman School of Medicine at the University of Pennsylvania. 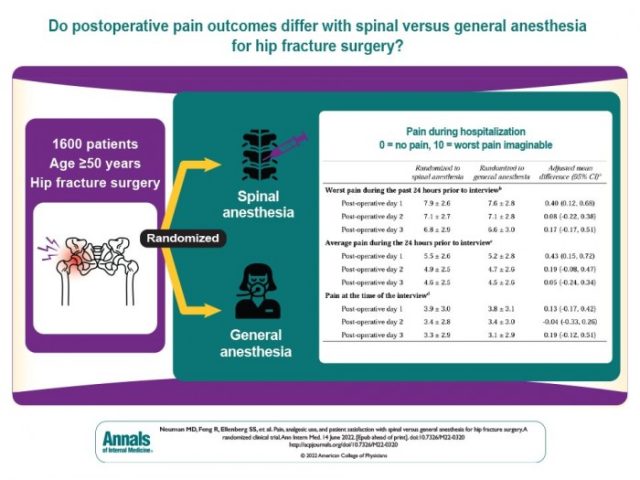 “In our study, patients who received spinal anesthesia did get fewer opioids in the operating room, but they ended up experiencing more pain and requiring more prescription pain medication after surgery,” the lead author said. , said Dr. Mark Newman, associate professor of anesthesiology and past chair of Penn Medicine’s Opioid Working Group. “While our study cannot conclusively determine whether this is due to the spinal anesthesia itself or the fact that less opioids are given upfront, this is a result that should make one examine some of the assumptions that inform current care pathways.”

Newman and his colleagues wanted to test the validity of the hypothesis about spinal anesthesia and pain reduction.

To achieve this, the scientists looked at data from 1,600 patients who underwent hip fracture surgery at dozens of hospitals in the United States and Canada between 2016 and 2021.

About half of the participants in the study, known as the REGAIN trial, received spinal anesthesia, while the other half received general anesthesia during surgery.

On a scale of 1 to 10, each patient was asked to rate their pain level at several points throughout the course of treatment. They were also asked to report whether they used any prescription pain medication after surgery. 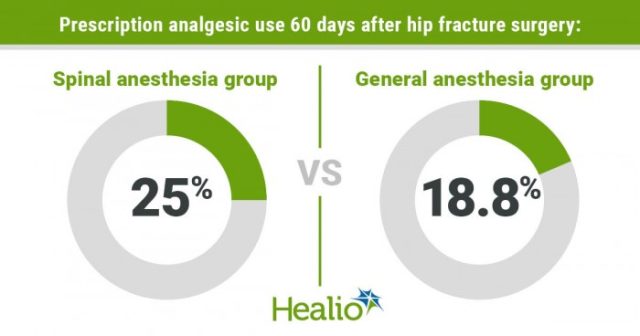 There was no significant difference in prescription pain medication use six and 12 months after surgery, but Newman remains concerned about his findings. : “Although the 180-day and 365-day results were not statistically significant, the 60-day results are still concerning because drug-related harm, such as respiratory depression or excessive sedation, may still occur in the short term.”

The study follows Newman’s 2021 study showing that general anesthesia is as safe as spinal anesthesia for patients with hip fractures. Again, the study’s findings contradict relatively broad assumptions in the medical community.

Newman and colleagues hope to improve pain care for patients with hip fractures and dementia by finding ways to increase the use of peripheral nerve blocks — a form of local anaesthetic injection that is encouraged despite recommendations to encourage all hip fracture patients insufficient.

In addition, they hope to apply the same perspective they used in the REGAIN trial: comparing general and spinal anesthesia – applied to total joint replacements, such as hip replacements.

The study was funded by the Patient-Centered Outcomes Research Institute (1406-18876).

Spinal anesthesia may lead to increased pain after surgery