This groundbreaking Nature paper is suspected of falsifying and misleading Alzheimer’s disease research for more than ten years?

A Nature paper that has been cited more than 2,300 times is suspected of fraud.

In the early morning of July 22, Science published a 6-month investigation report, alleging that there may be academic misconduct in more than 20 papers published by neuroscientist Sylvain Lesné of the University of Minnesota in the United States, including one published in Nature in 2006. a seminal paper.

This implicates one of the most-cited Alzheimer’s disease (AD) studies of the century. As soon as the news came out, it caused an uproar in the academic world. 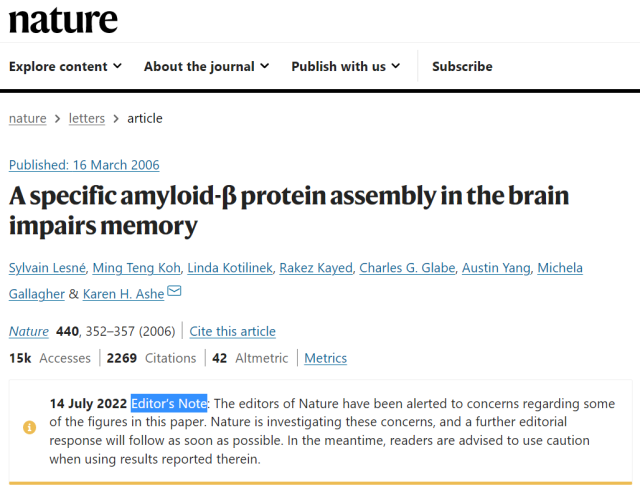 Thomas Südhof , a Nobel laureate neuroscientist at Stanford University, said: ” The most immediate and obvious damage is wasting NIH (National Institutes of Health) funding and thinking in the field, because people use these results as the basis for their own experiments. starting point. “

At worst, it may have misled the world’s Alzheimer’s research for 16 years.

In August 2021, Matthew Schrag , a neurologist and physician at Vanderbilt University, realized that he might be caught in a whirlpool of academic misconduct.

His colleagues wanted him to contact a lawyer who was investigating Simufilam , an experimental drug for Alzheimer’s disease .

The drug’s developer, Cassava Sciences, claims it improves cognition in part by repairing a protein that blocks amyloid beta (Aβ) deposits in the brain.

You must know that the ” amyloid hypothesis ” is one of the several pathogenesis hypotheses of Alzheimer’s disease.

The hypothesis posits that Aβ plaques in brain tissue are the primary cause of this devastating disease that afflicts tens of millions of people worldwide. Many research hotspots are based on this hypothesis to develop new drugs.

The attorney filed a petition with the U.S. Food and Drug Administration (FDA) to suspend two Phase III trials of Cassava Sciences’ Simufilam drug, arguing that some of the research behind the drug may be “fraudulent” of.

Matthew Schrag , 37 , already known for publicly criticizing the FDA’s approval of the anti-Aβ Alzheimer’s drug Aduhelm , has his own research refuting some of Cassava Sciences’ claims. He worries that the more than 1,800 volunteers who are participating in the Simufilam drug trial are at risk of side effects and receive no treatment benefit.

So he used his technical and medical knowledge to investigate public images about medicines and their underlying science.

He found doctored or duplicated images and dubious data in dozens of journal papers . He then sent all the investigative files to the NIH, which has invested tens of millions of dollars in the research.

In December 2021, Matthew Schrag visited the academic anti-counterfeiting website PubPeer in an attempt to investigate scientists associated with Cassava Sciences.

While searching “Alzheimer ‘s disease ” on PubPeer, posts about several papers in The Journal of Neuroscience caught his attention.

The post commented that several bands in the paper appeared to be repeated. He confirmed this speculation using software tools and found similar problems with other imprints in the same paper.

Eventually, Matthew Schrag stumbled upon this seminal paper published in Nature in 2006 , which was the basis for many others. It also appears to contain multiple doctored images.

His findings threaten one of the most-cited Alzheimer’s studies of this century and countless related experiments.

If his suspicions are correct, Sylvain Lesné’s research is an elaborate mirage.

The so-called key pathogenic substances, many scholars said they have not found

The first author of Nature ‘s groundbreaking paper is Sylvain Lesné , and the corresponding author is his advisor, the famous neuroscientist Karen Ashe , a professor at the University of Minnesota . This study provides strong support for the controversial “amyloid hypothesis”.

Karen Ashe has achieved a series of achievements. She served as a resident physician at the University of California, San Francisco, where she contributed to Nobel laureate Stanley Prusiner’s seminal work on prions.

In the mid-1990s, Karen Ashe created a transgenic mouse that produced large amounts of human beta amyloid (Aβ) , a substance that forms plaques in the animals’ brains. The mouse also exhibited dementia-like symptoms, making it a popular model of Alzheimer’s disease.

In the brains of transgenic mice, the research team discovered a previously unknown oligomer, named Aβ*56 . The team isolated Aβ*56 and injected it into young mice, and found that the young mice’s ability to recall simple, previously learned information decreased.

Karen Ashe touts Aβ*56 on her personal website as “the first substance found in brain tissue that has been shown to cause memory impairment in Alzheimer’s disease research . ” An editorial in Nature called Aβ*56 the “number one suspect” for Alzheimer’s disease. Less than 2 weeks after the paper was published, Karen Ashe received the prestigious Potain Gold Medal in Neuroscience.

According to data from the Web of Science database, Nature ‘s paper has been cited by more than 2,300 academic papers , more than four other important Alzheimer’s disease basic research reports published since 2006. Since then, NIH support for ” amyloid, oligomers, and Alzheimer’s disease ” research has risen from zero to $287 million in 2021. This research has not only helped Karen Ashe continue to advance, but also Sylvain Lesné’s career development is getting better and better.

In 2009, Sylvain Lesné joined the University of Minnesota along with an NIH-funded lab, and Aβ*56 remains the primary research focus.

In 2020, Sylvain Lesné became the leader of the Neuroscience Graduate Program at the University of Minnesota.

Just 4 months after Matthew Schrag communicated his concerns to the NIH, Sylvain Lesné received a coveted R01 grant from the agency for up to 5 years. Austin Yang, the NIH official in charge of the project and a co-author of the 2006 Nature paper, declined to comment.

In the 16 years since this landmark paper was published, Sylvain Lesné and Karen Ashe have published numerous papers on the research, either separately or jointly. However, only a few other research groups have reported the discovery of Aβ*56.

Karen Ashe , who declined an interview with Science by email , wrote, “I still have faith in Aβ*56,” citing her ongoing work on the structure of Aβ oligomers. “We’ve had preliminary results. I’m still excited about this work and believe it has the potential to explain why Aβ therapy is still effective despite recent failures of treatments for amyloid plaques.”

But in fact, sporadic evidence that Aβ*56 plays a role in Alzheimer’s disease has attracted attention before it was publicly questioned.

Donna Wilcock, an Alzheimer’s expert at the University of Kentucky, has long been skeptical of studies that claim to use “purified” Aβ*56.

This oligomer is notoriously unstable and will spontaneously convert to other oligomer types.

Even after purification, there could be multiple types in the sample, so it’s hard to say that any cognitive decline is due to Aβ*56 alone, she noted. Moreover, there is an important premise that Aβ*56 must exist.

In fact, Donna Wilcock and others say that some labs have tried and failed to find Aβ*56, and few have published those findings.

Because journals are generally not interested in negative results, researchers may also be reluctant to disprove a prominent researcher.

Interestingly, the leading proponent of the “amyloid hypothesis”, Dennis Selkoe of Harvard University, cited the Nature paper at least 13 times. But in two 2008 papers, he mentioned that he, too, had not found Aβ*56 in human body fluids or tissues.

These findings seem to speak volumes. Dennis Selkoe said that in science, once you publish your data, if it is not easily reproducible, there is concern that it is incorrect or untrue. Currently, there is little clear evidence for the existence of Aβ*56.

Images have been doctored, research may mislead the entire field

Science invited prominent independent image analysts and leading Alzheimer’s researchers to review Matthew Schrag ‘s investigative archives, including neuroscientist George Perry of the University of Texas at San Antonio and John Forsayeth of the University of California, San Francisco. They agreed with the overall conclusion, questioning hundreds of images, including more than 70 of Sylvain Lesné’s previously published papers. 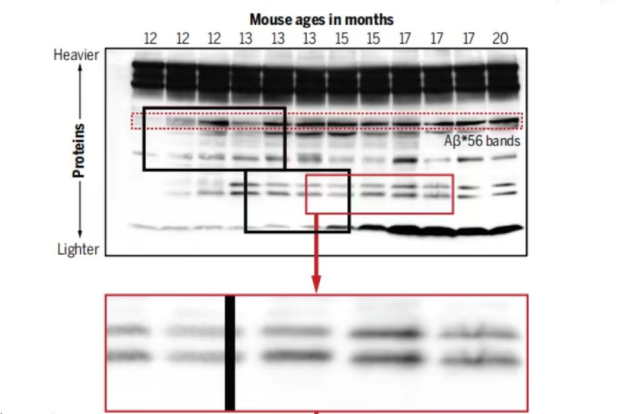 Molecular biologist Elisabeth Bik , a well-known academic anti-counterfeiter, says these appear to be images the authors synthesized by piecing together parts of pictures from different experiments.

The experimental results obtained may not be the expected results and the data may have been altered to better fit a hypothesis.

Denis Vivien, a cell biologist, said he wrote a paper on Aβ for Nature Neuroscience with Sylvain Lesné .

During the final revision, he saw that the images provided by Sylvain Lesné were suspicious, so he asked other students to repeat the findings, but failed. He questioned Sylvain Lesné , who denied wrongdoing.

Despite the lack of “hard evidence”, Denis Vivien retracted the paper before publication in order to maintain his scientific integrity and severed all ties to Sylvain Lesné .

Harvard’s Dennis Selkoe , who reviewed the investigation files at Science ‘s request, said the findings were credible. He didn’t see traces of PS in every suspicious image, but said, ” There must have been at least 12 or 15 images and I don’t think there’s any explanation other than manipulation “. An image in that Nature paper showing purified Aβ*56 showed “very concerning” signs of tampering , he said .

In all, this investigative report identified more than 20 papers with suspected Sylvain Lesné involvement, 10 of which were related to Aβ*56. In his report to the NIH, Matthew Schrag made the stakes clear: The dossier is only a small part of what is easy to see when reviewing publicly available data, and this dubious work has been cited thousands of times and therefore has the potential to mislead the entire field of research .

During the year, the NIH spent about $1.6 billion on projects involving amyloid, about half of all Alzheimer’s funding. Nobel laureate Thomas Südhof said: “The most immediate and obvious damage is a waste of NIH funding and thinking in the field, because people use these results as a starting point for their own experiments.”

Nature has already expressed concerns about the paper, saying that it will investigate the data problems in the paper as soon as possible, and remind readers to be cautious when using the conclusions in the paper.

Why have this paper misled Alzheimer’s disease research for more than ten years?