New progress has been made in the diagnosis of Alzheimer’s disease (AD).

In addition, Aβ misfolding combined with GFAP can further improve the accuracy of predicting AD in the asymptomatic stage .

AD is the leading cause of dementia. According to the World Health Organization, more than 55 million people worldwide have dementia, and by 2050, this number is expected to rise to 139 million.

In 2019, the estimated global public health cost associated with dementia was $1.3 trillion [2].

There are currently about 10 million AD patients in some countries, and it is expected to increase to 30 million by 2050 [3].

Therefore, early detection and early treatment of AD are particularly important. In recent years, there has been an increasing number of studies using biomarkers to predict AD, and blood-based biomarkers are a non-invasive and cost-effective option.

The current ATN classification system based on biomarker status can be used as a diagnostic criterion for AD [4].

Biomarkers in this classification system include Aβ (A), hyperphosphorylated tau (T), and neurodegeneration (N), which can be detected by imaging, cerebrospinal fluid examination, and PET, but are costly and invasive Due to defects such as sex, the application is subject to certain restrictions.

There are also several concentration-based blood biomarkers, including Aβ1-42/Aβ1-40 ratio, phosphorylated tau (P-tau), NfL, and GFAP, etc., which can be quantified by immunoassay or mass spectrometry-based methods for Assist in the early diagnosis of AD.

The latest research also shows that plasma biomarkers can show pathological changes more than ten years before the appearance of AD clinical symptoms [5,6], which suggests that there is still an urgent need to develop new early diagnosis and treatment for AD. landmark.

Aβ misfolding in the early stage of disease has been identified as a structure-based AD biomarker [7], and Aβ misfolding in plasma can be directly measured by immuno-infrared sensor technology [8].

It has been found that plasma Aβ misfolding can predict the risk of AD diagnosis 14 years in advance in population-based cohort studies [9,10];

and in cohort studies of participants with subjective cognitive decline, it can also be Forecast 6 years in advance [8]. Therefore, Aβ misfolding has potential applications in predicting AD risk.

This study is based on a nested case-control study (ESTHER) of elderly Germans, including 68 AD patients (diagnosed with AD within 17 years), and 240 controls (general practitioner-confirmed no dementia diagnosis) , and collected baseline measurements of the four plasma biomarkers.

Compared with controls, the AD patient group had significantly lower immunoinfrared sensor readings, indicating that subjects diagnosed with AD within 17 years had higher levels of Aβ misfolding in their plasma at baseline . 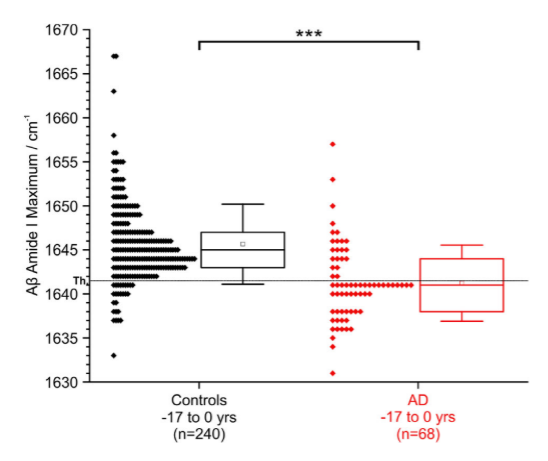 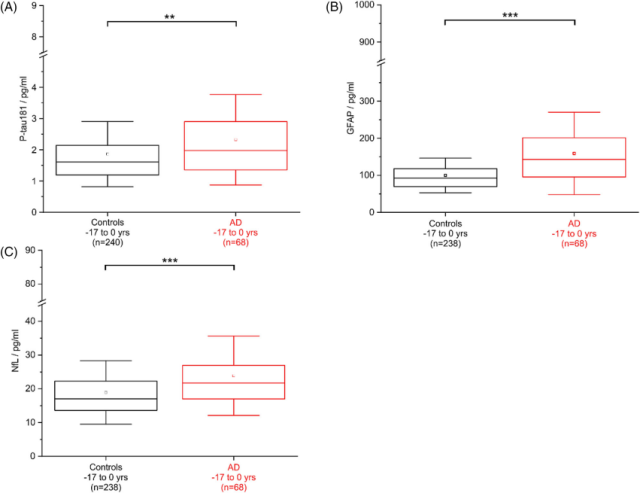 Measurements of P-tau181, NfL and GFAP in plasma at baseline 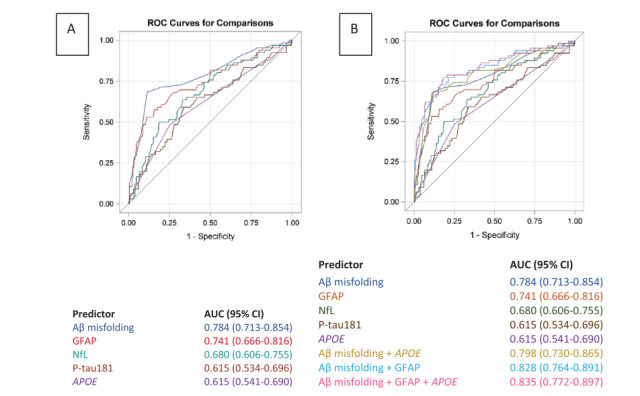 It is worth noting that the diagnosis of dementia in this study may not have been accurate because not all subjects had seen a neurologist or other specialist.

In conclusion, Aβ misfolding and GFAP have a strong ability to predict the risk of clinical AD, and can be used as potential biomarkers for early AD risk prediction.