Is herpes virus the cause of Alzheimer’s disease?

Neurology: Is herpes virus the cause of Alzheimer’s disease?

Regarding the etiology of Alzheimer’s disease (AD), the current mainstream view is that abnormal deposition of amyloid-beta and hyperphosphorylation of tau protein synergistically lead to neuronal death, but with the development of drugs targeting amyloid-beta in clinical trials One by one, scientists have also tried to find the cause of AD from different perspectives.

Among them, the herpes virus seems to “stand out” [1].

Preclinical studies have shown that β-amyloid has similar or even higher antibacterial ability to antimicrobial peptides [2], providing strong evidence for the hypothesis that infection causes AD.

In animal studies, multiple groups have reported that herpesvirus infection increases the risk of dementia [3, 4].

At the same time, multiple large-scale cohort studies have also shown that herpesvirus infection is associated with an increased risk of dementia, while those receiving antiviral therapy have a reduced risk of dementia [5-7].

To investigate this question, Professor Keenan A.  Walker’s team from the National Institute on Aging analyzed longitudinal MRI data from participants in the Baltimore Longitudinal Study of Aging (BLSA) and found that a diagnosis of symptomatic human herpesvirus (sHHV, a Symptoms and diagnosis, including varicella-zoster virus, herpes simplex virus-1, or herpes simplex virus-2) infection is associated with decreased total white matter volume, especially in the temporal lobe, and occipital white matter reduction with antiviral therapy volume reduction .

At the same time, the researchers also found that although the sHHV group had higher cognitive scores at baseline, sHHV infection was associated with a year-on-year decline in attention span.

These findings suggest that although sHHV infection is associated with multiple neurocognitive features, such as white matter volume, attention, and astrocytosis, they do not suggest a specific link between sHHV infection and AD In the famous journal “Neurology” [10].

Data for the study came from the BLSA, a longitudinal study conducted in Baltimore to assess the physical and cognitive functioning of participants in the community.

The primary objective of the study was to assess the relationship between sHHV infection and regional brain volume obtained from MRI, in addition to sHHV infection and cognitive function (attention, executive function, verbal fluency, verbal memory, and visuospatial abilities) and multiple correlation of biomarkers.

At baseline, there was no significant difference in brain volume between participants in the sHHV-infected and non-sHHV-infected groups.

For total brain volume, total gray matter volume, and AD characteristic volume, no correlation was found with the diagnosis of sHHV infection.

The researchers also found that in sHHV-infected participants, receiving antiviral therapy was associated with a slower decline in occipital white matter volume (p=0.036) . 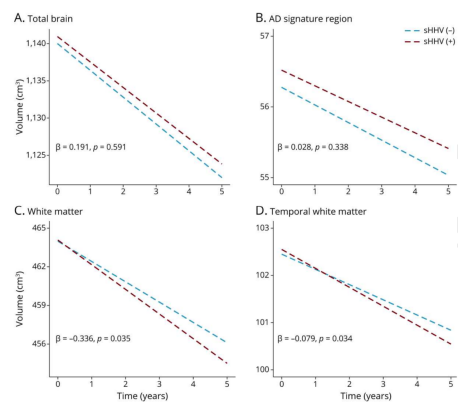 Relationship between sHHV infection and longitudinal changes in brain volume

These results are consistent with previous studies showing that HHV primarily affects the white matter of the brain, especially in the temporal lobe [11].

Next, the researchers assessed the link between sHHV infection and changes in cognitive function.

At baseline, the sHHV-infected group had better performance in attention, executive function, and verbal memory compared to the non-sHHV-infected group, but it had a greater decrease in longitudinal changes in attention (-0.01 Z-score /year, p=0.008), and this effect was stronger in younger participants .

No correlation was found between sHHV infection and other cognitive function changes.

Among sHHV-infected participants, antiviral treatment was not associated with changes in participants’ future cognitive function. 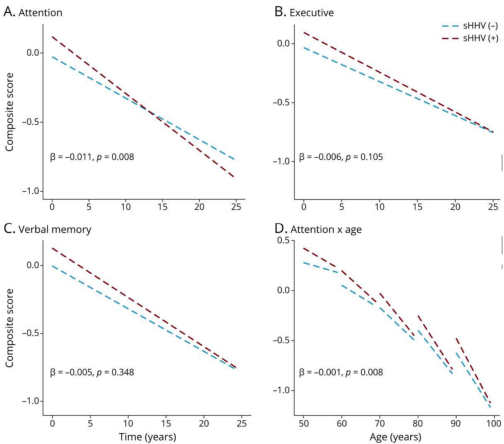 Relationship between sHHV infection and longitudinal changes in cognitive function

Overall, this study demonstrated that sHHV infection still has a certain impact on brain structure and cognitive function, with decreased white matter volume and attention, and increased plasma GFAP levels in sHHV-infected patients.

However, the results of this study do not support a direct relationship between sHHV infection and AD , and the longitudinal changes in total brain volume, gray matter volume, memory function, and Aβ42/40 ratio in sHHV-infected patients were not significantly different from those without sHHV infection.

The pathogenesis of AD is complex, and it is clear that the existing evidence cannot prove a direct causal relationship between sHHV and AD.

But in theory, inflammation caused by viral infection could synergize with other actions to cause neuronal death , and antiviral therapy has also been reported to reduce the risk of dementia.

But another real problem is that the infection rate of herpes virus is too high.

There are not many people in the world who have not been infected with herpes virus, and there are too many types of herpes virus.

Do any of these subtypes have What about a higher risk of AD? This is also a question worth exploring.

Studies have shown that two herpesvirus subtypes, HHV-6A and HHV-7, are commonly found at high levels in the brains of AD patients, especially HHV-6A, which can participate in the regulation of host AD risk genes, such as BACE1, APBB2, etc. [7] .

After the classification of herpes virus subtypes, it seems necessary to study the relationship between the two, however, such studies are still rare.

Therefore, more and more in-depth studies are needed to reveal the relationship between herpes virus and AD.

Although the study did not reach the expected conclusions, it represents the efforts of the scientific community to explore the pathogenesis of AD in order to find a more effective way to treat AD.

It is hoped that one day, all AD patients can remember to go home The road, recalling every beautiful moment in life.

Is herpes virus the cause of Alzheimer’s disease?