Dispersion paints are often used in homes to paint walls and ceilings.

An interdisciplinary research team at the University of Bayreuth has recently examined the chemical makeup of two common dispersion coatings and found a large number of solid particles as small as a few micrometers or nanometers.

In studies of biological test systems, these particles have been shown to be harmful to living organisms.

Using a new membrane developed at the University of Bayreuth, these particles can be filtered out of the water before entering the environment. 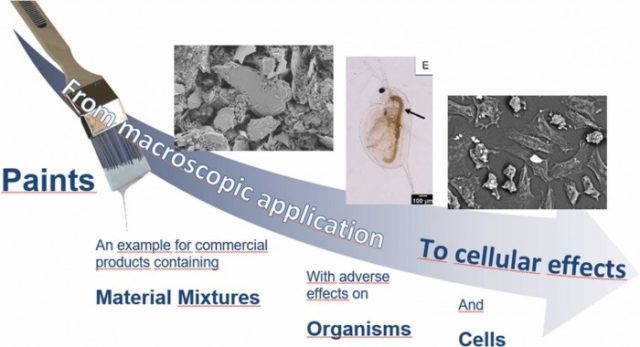 A study by researchers at the University of Bayreuth on dispersed paint components and their potential effects on living organisms is published in the journal Ecotoxicology and Environmental Safety .

The research is based on a close interdisciplinary collaboration at the University of Bayreuth’s 1357 Collaborative Research Centre “Microplastics”.

The difference between these two paints is mainly in their dripping properties, as they are designed for wall paints on the one hand and ceiling paints on the other.

Characteristic solid components in the micro or nanometer range are particles of silicon dioxide, titanium dioxide and calcium carbonate, as well as particles of various plastics, especially polyacrylates.

“Many of these tiny particles enter the environment, for example, through abrasion or weathering of the paint layer. Our research now shows that when brushes, rollers, scrapers and buckets used to paint walls and ceilings wash away paint residues by , the particles of dispersible paints may end up in wastewater and thus into the environment. The impact on the environment needs to be thoroughly investigated, which is all the more urgent given the worldwide popularity of dispersible paints and their different material compositions.”

“This is why we did not limit ourselves to chemical analysis of paint components, but also investigated their effects on living organisms and cells,” said Prof. Dr. Andreas Greiner, Deputy Spokesperson of the Collaborative Research Centre for Microplastics.

To investigate, the scientists at the University of Bayreuth chose two test systems that have already been demonstrated in the study: Daphnia daphnia and a series of mouse cells.

The scientists tested the water fleas according to the OECD guidelines for chemical testing. In this test, the mobility of the organism is considered.

It was found that the mobility of Daphnia was significantly reduced when the water contained a high proportion of dissolved and undissolved inorganic nanoplastic and microplastic particles.

In mouse cells, a reduction in cellular activity, usually caused by particles in the nanometer range, was observed.

The metabolism of mouse cells was significantly disrupted by nanoparticles of titanium dioxide and plastic, especially plastic.

“Our research shows that the constituents of dispersed paints can cause different degrees of reactions in living organisms and cells. Therefore, the possibility that these constituents are harmful to the environment cannot be ruled out.” Professor Dr. Christian Laforsch, spokesman for the Collaborative Research Centre “Microplastics” “Further research is urgently needed in this area, especially as we still know very little about whether the interaction between nanoparticles made of plastic and inorganic nanoparticles triggers additional damage,” explained the researchers.

“Equally, how the components of dispersed coatings interact with other substances in different environmental compartments, such as in the air, in soil or in rivers, remains a largely unresolved question. However, it has become clear that dispersed coatings It should not be accidentally discarded in the environment,” says Prof. Dr. Ruth Freitag, Head of the Department of Process Biotechnology at the University of Bayreuth.

While studying dispersion coatings and their possible effects, the researchers led by Prof. Dr. Andreas Greiner are also focusing on another project. They have developed a new process to remove potentially harmful particles from dispersed wall paint from wastewater through filtration.

This involves using a membrane made from functionalized fibers produced by an electrospinning process.

The membrane retained micro- and nano-sized particles in different ways.

On the one hand, the pores of the membrane are very fine and do not allow the passage of fine particles.

On the other hand, the interaction between membrane fibers and nanoparticles causes them to stick to the membrane surface even though they can enter the pores.

In both cases, the filtration effect was independent of rapid and massive clogging of the pores. So, for example, water can easily pass through membranes and runoff.

Scientists from the University of Bayreuth describe the successful application of the membrane in a paper published in the journal Macromolecular Materials and Engineering .

They also tested two dispersible coatings that had been shown in the study to be potentially harmful to living organisms.

It was found that the film was able to retain typical color components—especially nanoparticles of titanium dioxide and polyacrylate, as well as microparticles of calcium carbonate.

“In everyday life, all these colour components are discharged together into wastewater. Here they mix and in some cases even change their structure and properties due to their interaction. Therefore, we specifically tested the filtration performance of our electrospun membrane for this mixture. The high filtration results we achieved suggest that this process has great potential when it comes to purifying water from particles in the micro and nano scale, such as the world Particles contained in coatings that are commonly used everywhere,” Greiner said.