Recently, Avram S. Bukhbinder and others from the University of Texas Health Sciences Center at Houston (UT Health) published important research results in the Journal of Alzheimer’s Disease .

Based on data from approximately 2 million subjects, they found that for people over 65 in the U.S., receiving at least one dose of the flu vaccine was associated with a 40 percent lower risk new-onset AD over a 4-year follow-up period , compared with no flu vaccine. % about [1]!

In addition, multiple microbial infections are associated with cognitive decline, such as respiratory infections, herpes infections, gastrointestinal infections, and even COVID-19, especially in older adults [4-7].

Studies have shown that multiple vaccinations are strongly associated with a reduced risk of dementia, with previously reported vaccines including tetanus, diphtheria, pertussis, polio, tuberculosis, shingles, and influenza [4,8-10].

Although influenza vaccines are already listed, previous studies on their correlation with AD risk were limited by small samples, and the included population was highly homogenous and could not represent the general population.

As a result, Bukhbinder et al. wanted to conduct a large sample study of people over the age of 65 in the United States.

What a large sample study needs is people, and it needs to be many, many people.

Where to find so many people? The researchers had a flash of inspiration and set their sights on the Optum Clinformatics Data Mart (CDM), a large-scale commercial insurance claims database.

After all, CDM is full of gold, including a large number of people’s medical claims, drug claims and other information.

Subjects with at least 1 and 2 medical records with ICD (International Classification of Diseases) codes during the look-back period and follow-up period, respectively, were included in the analysis.

Of course, if the subject was under 65 years of age at the start of the 4-year follow-up period, or had a diagnosis of mild cognitive impairment, encephalopathy, dementia of any cause, or used AD-related medication during the 6-year retrospective period, the Excluded.

With the data in hand, it is time to unravel the true effect of the flu vaccine on the risk of new-onset AD. By Propensity Score Matching (PSM), 935,887 sample pairs (influenza vaccinated + influenza unvaccinated) were generated from 2,356,479 subjects.

This means that for people over the age of 65 in the United States, at least one dose of the flu vaccine was associated with a 40% lower risk of new-onset AD compared with no flu vaccine. In addition, for every 29.4 older adults vaccinated against influenza, 1 will be protected from new-onset AD.

Adjusting the lookback period, or changing the age requirement during the follow-up period had some impact on RR, ARR, and NNT.

When the look-back period remained unchanged at 6 years, but the ARR was significantly increased at the beginning of the follow-up period when the age was older than 75 years, it can be seen that the cognitive protection of influenza vaccination for the elderly over 75 years old seems to be more obvious.

In the secondary analysis, the researchers counted the number of flu vaccinations the subjects had received during a 6-year lookback period.

They used a Time-to-event model to assess the effect of back-dated influenza vaccination doses on the cumulative incidence of Alzheimer’s disease, and the results were as expected.

In other words, those who continued to receive the annual flu vaccine had the lowest risk of Alzheimer’s disease. 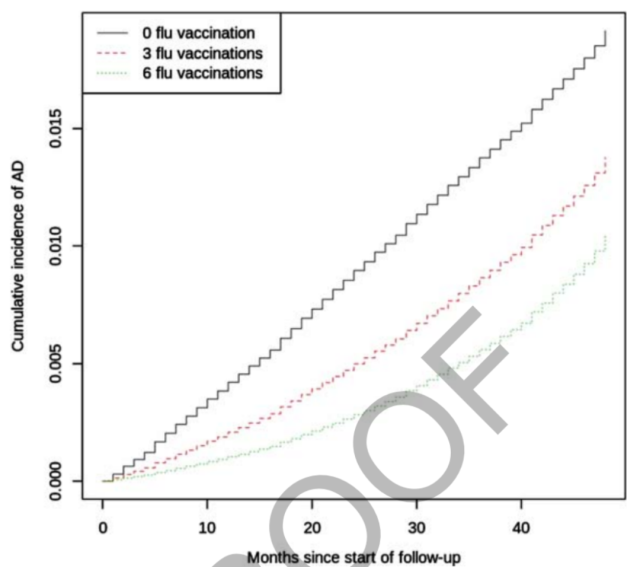 The more flu vaccine doses, the lower the cumulative risk of Alzheimer’s disease

Regarding the mechanism behind this phenomenon, Schulz of the University of Texas McGovern School of Medicine said: ” There is evidence that multiple vaccines can protect against Alzheimer’s disease, so we think this may not be a specific effect of the flu vaccine. The corresponding author of this paper, Bukhbinder, said with emotion: “Whether there is a similar relationship between COVID-19 vaccination and the risk of Alzheimer’s disease is also worth exploring.”[11]

All in all, based on a large sample study of people over the age of 65 in the United States, it is not difficult to find that influenza vaccination seems to be of great benefit to the prevention of “the most difficult” Alzheimer’s disease~