In recent years, it has been found that the incidence of colorectal cancer is also closely related to the intestinal flora.

Enterotoxigenic Bacteroides fragilis[2], pks+Escherichia coli[3] and Fusobacterium nucleatum[4] in the gut have been identified one after another to promote the occurrence and development of colorectal cancer.

Recently, a new member has been added to the blacklist of cancer-promoting intestinal bacteria.

A team led by Cynthia L. Sears of Johns Hopkins University discovered for the first time that a toxigenic strain of Clostridium difficile in the mucosal sera of patients with colorectal cancer can induce colon tumors in mice, and its cancer-promoting effect depends on the continuous colonization and production of the strain The toxin TcdB. Related papers were published in Cancer Discovery , a top journal in oncology [5].

In previous studies, the Cynthia L. Sears team found that the human gut microbiota, whether from colorectal cancer patients or healthy people, formed biofilms on the surface of the intestinal mucosa, which could induce colon tumors in mice [6] .

In this study, the researchers continued their experiments to analyze the cancer-promoting components and detailed mechanisms of the gut microbiota.

First, the researchers obtained bacterial-rich mucosal serum from patients with colorectal cancer and inoculated it into mice by gavage.

However, these unique gut bacteria do not include known cancer-promoting enterobacteria. This suggests that other new intestinal bacteria are playing a role in promoting cancer! 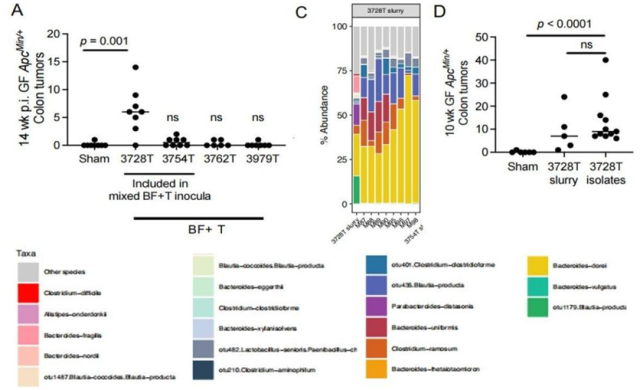 The researchers tested these intestinal bacteria and found that C. difficile was significantly enriched in colon tissue and feces of tumor-inducing mice, and the relative abundance in feces was positively correlated with the number of colon tumors.

In addition, RNA-sequencing revealed that the expression of C. difficile toxins TcdA and TcdB were also significantly upregulated in the colons of tumor-induced mice compared to their expression in healthy mice.

Clostridium difficile is an anaerobic bacterium that secretes TcdA (enterotoxins) and TcdB (cytotoxins) and causes disease through toxins.

From this, the researchers speculate that C. difficile may be the driver of tumorigenesis in mice with colorectal cancer. 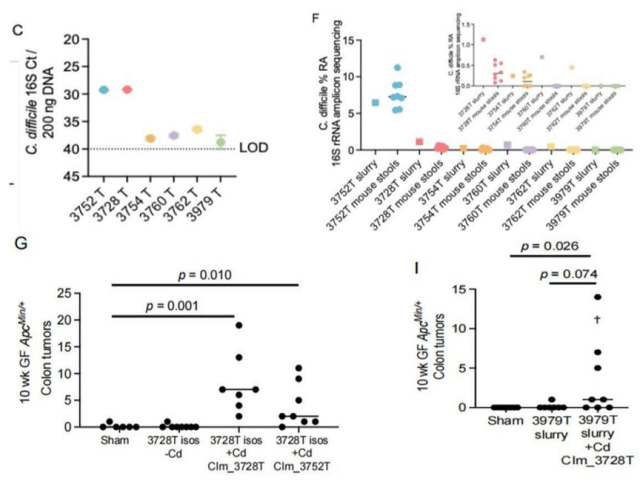 Next, the researchers explored the mechanism by which Clostridium difficile promotes colon cancer.

The early response of the intestinal mucosa to cancer-promoting bacteria is a key step in the process of colon tumorigenesis [7]. To identify early tumorigenic events caused by C. difficile, the researchers examined the histological response of the colonic mucosa of mice after inoculation with C. difficile and found that abnormal crypts and microadenomas in the colon of mice gradually increased with the time of inoculation.

When increased, enterobacterial biofilms formed on the surface of the colon and invaded into the crypts.

Considering the significant cancer-promoting effect of C. difficile, the researchers expected C. difficile to be the main component of the gut microbiota of tumorigenic mice. The relative abundance of C. difficile is very low, and it is not the dominant species.

The researchers then used antibiotics to eliminate C. difficile, which almost completely blocked the formation of microadenomas after 2 weeks.

These results suggest that it is not the dominance of C. difficile in the microbiota, but rather sustained colonization and toxin production, that is key to promoting tumorigenesis. 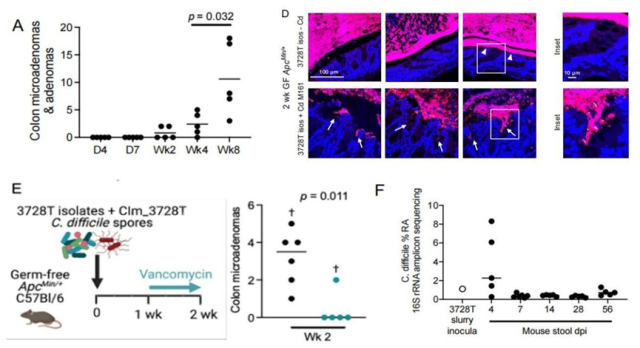 In mice inoculated with C. difficile, intestinal microadenomas gradually increased (Panel A), and enterobacterial biofilms formed on the surface of the colon and invaded into crypts (Panel D), but C. difficile was not a tumor-forming mouse intestine The dominant species of the tract flora (Panel F), elimination of C. difficile with antibiotics almost completely blocked the formation of microadenomas (Panel E).

In addition, knocking out TcdB did not Affects biofilm formation and Clostridium difficile colonization levels. These results demonstrate that TcdB is necessary for C. difficile to induce tumorigenesis. 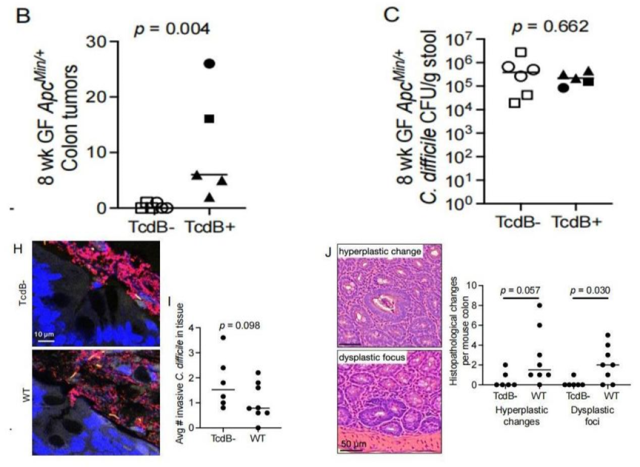 Immune infiltration analysis showed a marked increase in the abundance and activation of lymphocytes characterized by IL-17 production.

Collectively, using human colorectal cancer specimens and mouse models, the researchers found that the intestinal pathogen C. difficile promotes colorectal cancer development, and its tumor-promoting effect is dependent on the C. difficile toxin TcdB, which is associated with the induction of Wnt signaling. , reactive oxygen species and cancer-promoting mucosal immune responses, revealing for the first time that chronic infection with Clostridium difficile is also a potential driver of colon tumor pathogenesis.

There are a large number of microorganisms in the human gut, which are closely related to the health of the human body and affect all aspects of the gut.

With the deepening of people’s understanding of the intestinal flora, the blacklist of cancer-promoting enterobacteria is also expanding, and Clostridium difficile may not be the last one.