Why is it so easy for someone to quit smoking and drinking?

Why is it so easy for someone to quit smoking and drinking? Unraveling the genetic structure behind smoking and alcoholism….

As we all know, whether first-hand smoke or second-hand smoke, smoking will have adverse effects on the respiratory system. In the era of the COVID-19 epidemic, smoking also increases the risk of COVID-19 pneumonia.

Even so, the power of the phrase “smoking is harmful to health” is limited to cigarette packs. The ranks of smokers are only growing.

Previously, a report published by The Lancet stated that since 1990, the number of smokers in the world has increased by 150 million, reaching an all-time high of 1.1 billion, and the cost of this growth is also huge.

Only in 2019 Every year, nearly 8 million people die from smoking.

Likewise, another study published in The Lancet states that drinking alcohol does not confer any health benefits, and the claim that drinking in moderation is beneficial simply does not exist. Alcoholism has become the number one “killer” of young and middle-aged men worldwide.

But these scientific studies have failed to awaken smokers and drinkers, and attempts to control smoking and alcoholism to reduce mortality have failed.

There is ample evidence that long-term substance use disorders , including smoking and alcoholism, are associated with many common diseases and conditions, such as lung cancer, liver disease, and psychiatric disorders.

However, few therapeutic strategies are available, mainly due to gaps in scientists’ understanding of the relevant biological mechanisms.

The study identified genes associated with smoking and alcoholism traits that are highly expressed in certain types of neurons and trigger other cells to transmit chemical signals in the brain.

In addition, the study helps refine neurobiological hypotheses of smoking, alcohol use, and addiction phenotypes in general by linking genetic risk factors to their target genes.

In a previous study of twins, the team found that in addition to environmental factors such as family problems or personal trauma, genetic factors may explain why some people abuse drugs .

Through genome-wide association studies (GWAS) , researchers have successfully identified genetic variants associated with smoking and alcoholism traits. However, the vast majority of risk variants reside in noncoding regions of the genome.

This means that genes in these regions do not directly translate their genetic information into proteins with known biological functions. Therefore, what actually happens in the non-coding regions remains unknown.

In a study published in Nature Neuroscience in March 2020, the team developed a method called Hi-C-Coupled-Genome Data Annotation and Functional Analysis (H-MAGMA) , which can integrate brain cell chromatin by integrating Interaction Maps to Improve Prediction of Brain Disease Risk Genes.

The team applied H-MAGMA to five psychiatric disorders and four neurodegenerative diseases to explore the biological pathways involved in each. 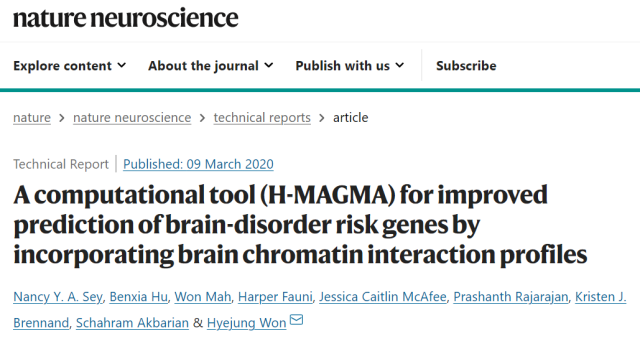 In the new study, the team extended H-MAGMA to the GWAS of smoking and alcohol abuse traits and identified its putative target genes for further characterization.

They found that smoking and alcohol abuse traits may affect the neural circuits that contribute to addiction, including the prefrontal cortex, nucleus accumbens, amygdala, and midbrain (MB) dopaminergic neurons (DN) , such as the ventral tegmental area and substantia nigra.

The researchers believe that the characterization of chromatin structure in the brain’s reward circuit is critical for understanding the mechanisms of gene regulation associated with substance use.

Since neurons are the primary driver of substance use behavior, they analyzed the chromatin structure of dopaminergic neurons and cortical neurons (CN) associated with substance use disorders in the dorsolateral prefrontal cortex (PFC) , and then converted H- MAGMA was applied to GWAS summary statistics related to nicotine dependence, daily smoking, alcohol use disorder and alcoholism to identify risk genes associated with each trait and to map identified risk genes to key pathways associated with smoking and alcoholism traits , including drug metabolism processes and neuronal apoptosis.

This suggests that they are relevant cell types for understanding the mechanisms by which genetic risk factors influence smoking and alcoholism.

Finally, the researchers identified pleiotropic genes between smoking and alcoholism traits and hypothesized that they reveal unknowable and common neurobiological mechanisms of substance use addiction.

The number of pleiotropic genes in dopaminergic neurons is approximately 26 times that of cortical neurons, thus, the dopaminergic pathway plays a key role in mediating the general addiction phenotype. 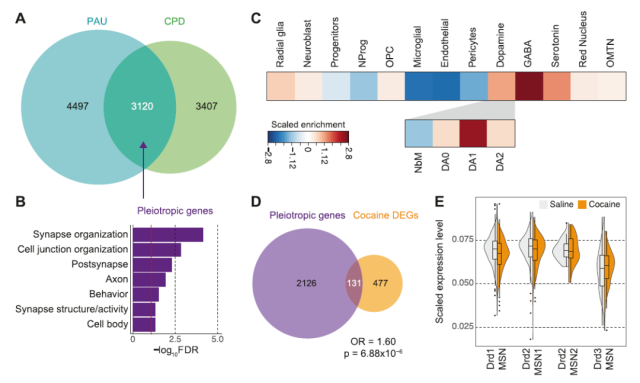 They also found that smoking-related genes were associated with pain perception and reactions to food, as well as the abuse of other drugs , such as cocaine .

Genes associated with alcohol use have been linked to stress and learning as well as misuse of other drugs such as morphine .

Given the current lack of treatment options for Substance Use Disorder (SUD) , the researchers also used the EnrichR Drug Signature and Drug Matrix databases.

This is a comprehensive genetic analysis tool that can identify potential SUD drug candidates based on genetic evidence.

They identified several drug candidates that were significantly enriched for smoking and alcohol abuse traits, including mood stabilizers and selective serotonin reuptake inhibitors, such as fluoxetine, citalopram, and imipramine, which were comparable to these drugs.

Potential treatment outcomes were consistent for some patients diagnosed with nicotine or alcohol dependence.

The study points to a degree of fusion between addiction-related risk genes and molecular pathways associated with other types of psychiatric disorders.

These findings suggest that there is ample epidemiological and genetic evidence to support comorbidity between psychiatric disorders and substance use.

Why is it so easy for someone to quit smoking and drinking?