Smoking is one of the main “accomplices” of lung cancer, it is already a certainty [1].

Chemicals in cigarettes, such as polycyclic aromatic hydrocarbons, can cause DNA damage in cells and lead to cancer-related genetic mutations [2].

However, a phenomenon that cannot be ignored is that 70% of smoking-related deaths occur in the elderly, and 80-90% of lifetime smokers do not develop lung cancer [3, 4].

This has also become an excuse for many smokers to “swallow and smoke” without fear.

Several studies have shown that there are a large number of somatic mutations in tumor cells of lung cancer patients with a history of smoking [5].

However, there is a lack of research on the somatic mutation of distal bronchial basal cells, the major progenitor cells of squamous cell carcinoma [6].

In addition, few quantitative and systematic studies have explored the effects of age and smoking on genetic mutations.

Based on the above phenomenon and previous research, researchers from the Albert Einstein College of Medicine in the United States collected distal bronchial basal cells from 14 never-smokers and 19 smokers of different ages, and carried out Single-cell whole-genome sequencing, quantitative analysis of mutations in a single basal cell, found that genetic mutations increase with age, and smoking will greatly aggravate mutations.

The research results were recently published in the prestigious journal Nature genetics [7].

The study first explored the effect of age on genetic mutations.

The researchers quantitatively analyzed the genetic mutations in the basal cells of never-smokers and found that the median values ​​of single nucleotide site variants (SNVs) and insertion deletion mutations (INDEL) in the nucleus increased with age.

There was a high trend where the changes in SNVs were statistically different (Fig. 1).

This suggests that even without smoking, the level of genetic mutations in distal bronchial basal cells increases with age .

The researchers further analyzed the gene mutations in the basal cells of smokers and found that the median values ​​of SNVs and INDELs in smokers also increased with age, and the increase rate of SNVs was significantly higher than that in non-smokers .

The researchers also analyzed the effect of smoking on genetic mutations.

During the course of the study, a particular participant (1320), an 81-year-old light smoker (6 packs per year) and newly diagnosed with lung cancer, was found to be highly mutated in all 6 nuclei tested.

Mutations in DNA repair genes and multiple tumor-driving genes were found in the nuclei of four of these cells, suggesting that these cells may be derived from the same cell clone with malignant changes.

This is true, the more cigarettes you smoke, the more “active” your genes are mutated. Of course, when people who can’t quit smoking see this, they must not think “then I’ll be fine if I smoke more”.

Because the accumulated gene mutation is not a simple factor that causes lung cancer, even if “smoking a few more packs of cigarettes” will not make the gene mutation more, it may promote the occurrence of lung cancer through other ways. 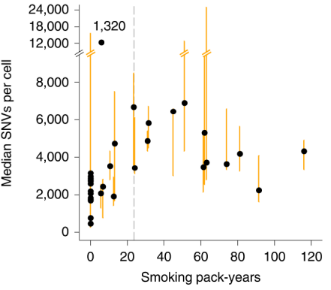 Figure 3. Median SNVs increased with age when smoking less than 23 packs per year

Now that tumor driver genes are important in tumor development, the researchers analyzed the samples for mutations in known lung cancer and pan-cancer driver genes. 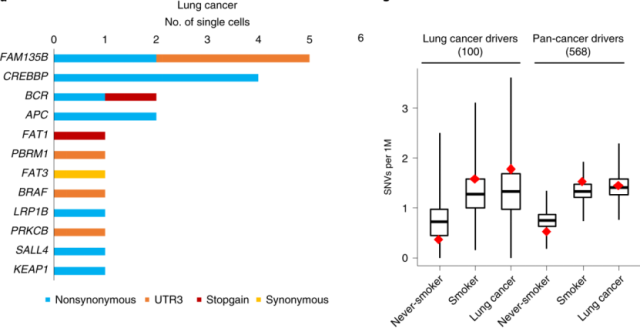 Just like water scars, when cell genes are damaged and repaired by various internal and external stimuli, gene mutations will appear and leave traces, which we call mutation characteristics, which can be used to infer to a certain extent. which variants [8].

Which mutational signatures were associated with age or smoking were also analyzed in this study.

It was found that SBS4 (single base substitution 4) was only present in the bronchial basal cells of smokers.

SBS4 has been reported to be the main mutational signature of lung cancer with smoking history.

The above suggests that SBS4 is the “wound” left by smoking in the genome. In addition, the study found that SBS5 was not only related to smoking, but also positively related to age (Figure 5).

Figure 5. The relationship between the median value of intranuclear SNVs containing SBS4 (left) and SBS5 (right) and age in smoking and non-smoking groups

In addition to somatic mutations, germline mutations inherited from parents are also associated with the development of lung cancer.

One notable result showed that 2 lung cancer participants with a history of smoking developed 2-fold higher levels of SBS4 on the AKR1C2 gene, which encodes a protein that is an important PAH “antidote.”

It is suggested that the mutation of this gene may be an important factor that smoking easily induces lung cancer.

Since Columbus brought tobacco from the American continent more than 500 years ago, to today, every pack of cigarettes is marked “smoking is harmful to health”, tobacco has witnessed the history of human society.

Tobacco has been used to treat diseases at first, and now it has been proven to cause diseases.

It is also accompanied by changes in the types of human diseases, an increase in average life expectancy and the development of medicine.

With the appearance of the first report on bronchial lung cancer caused by smoking in 1950, scientists’ exploration and verification of tobacco-induced cancer has not stopped.

Based on previous research reports, this study confirmed that smoking increases the risk of lung cancer by promoting somatic mutations in normal bronchial basal cells .

In addition, most smokers do not suffer from lung cancer, which is explained in this report. Possibly due to the increase in the accuracy of DNA repair or the reduction of DNA damage, the gene mutations associated with the development of lung cancer are reduced, thus reducing the risk of lung cancer.