Why most people who smoke don’t get lung cancer?

Good question: Why most people who smoke don’t get lung cancer?

According to the World Health Organization’s International Agency for Research on Cancer (IARC) 2020 global cancer burden data, lung cancer is the second most common cancer worldwide (2.2 million) and the leading cause of death (1.8 million) worldwide .

Smoking is the leading cause of the vast majority of lung cancers, yet only a minority of smokers develop lung cancer. Why?

On April 11, 2022, researchers from the Einstein College of Medicine in the United States published a research paper entitled: Single-cell analysis of somatic mutations in human bronchial epithelial cells in relation to aging and smoking in Nature Genetics , a sub-journal of Nature .

Using single-cell sequencing technology, the study found that some of the most smokers may have powerful “self-protection mechanisms” that limit the DNA mutations caused by smoking to protect themselves from lung cancer .

This research helps identify and spot those smokers who are at higher risk of lung cancer, so they can be monitored specifically.

Smoking has long been thought to cause lung cancer by inducing DNA mutations in normal cells through smoke.

But in practice, this idea has not been proven before because DNA mutations in normal cells cannot be accurately quantified.

But a few years ago, the study’s corresponding author , Professor Jan Vijg , improved single-cell whole-genome sequencing methods that made this quantification possible.

There are some sequencing errors during single-cell whole-genome sequencing that are difficult to distinguish from true DNA mutations, especially when analyzing rare or random mutations.

The single-cell multiple displacement amplification (SCMDA) technology developed in this study can greatly reduce the errors that may be introduced in single-cell whole genome sequencing, thereby solving this problem.

In this latest study, the research team used the single-cell multiple displacement amplification (SCMDA) technique to analyze and compare DNA mutations in normal lung epithelial cells from two populations, one from never-smokers (a total of 14 people, aged in 11-83 years old) , one is smokers (19 people in total, aged 44-81 years old) , these smokers smoke up to 116 pack-years (1 pack-year refers to the number of packs smoked per day × the number of years of smoking; for example Smoking 2 packs a day for 20 years, or 40 pack-years), 14 of the 19 smokers developed lung cancer, and 1 of the 14 non-smokers developed lung cancer.

The lung cells used for sequencing were collected from patients undergoing bronchoscopy for diagnostic tests not related to cancer. Proximal bronchial basal cells (PBBCs) can survive for years or even decades and thus accumulate mutations with age and smoking, and of all lung cell types, these are the most likely to become cancerous.

The researchers found that DNA mutations (single-nucleotide variations and insertions and deletions of small DNA fragments) accumulate in the lung cells of non-smokers and those of smokers with age. More DNA mutations.

But it also raises the question: Why don’t most smokers get lung cancer? 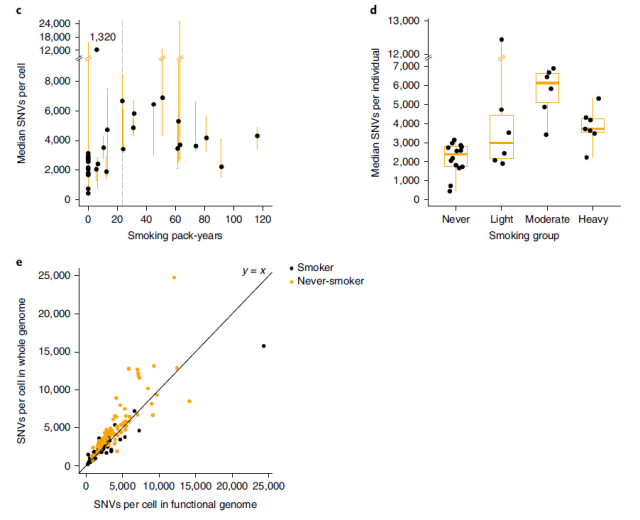 That is, those who smoked the most did not have a corresponding increase in their DNA mutational burden to the highest levels.

They smoked so much and still survived without lung cancer because their cells inhibited further accumulation of DNA mutations.

This plateau of DNA mutations may be due to these people having a more robust DNA damage repair system that repairs DNA mutations caused by heavy smoking.

Dr. Simon Spivack , co-corresponding author of the study , said that lung cancer is the most deadly cancer worldwide, far exceeding other cancers, and lung cancer is difficult to detect early. This research is an important step towards prevention and early detection of lung cancer risk. step.

Professor Jan Vijg , co-corresponding author of the study, said the discovery led to a new direction of research to assess a person’s lung cancer risk by testing his DNA repair or detoxification abilities.

Why most people who smoke don’t get lung cancer?