Aging is a complex process leading to functional decline of multiple tissues and organs.

The aging process is closely associated with multiple features at the molecular, cellular, and physiological levels, such as genomic and epigenomic alterations, loss of protein homeostasis, decline in overall cellular and subcellular functions, and dysregulation of signaling systems.

However, the relative importance, inter-mechanisms, and hierarchical order of these aging features have not been elucidated.

Furthermore, it remains unknown whether the drivers of aging are of multiple origins or based on a single source of unity.

In recent years, an increasing number of studies have shown that DNA damage affects most aging phenotypes and may be a potential unifying factor driving aging.

Professor Björn Schumacher of the University of Cologne, Germany published a review article in Nature last year, clarifying how the main features of aging phenotypes return to DNA damage causally and mechanistically, and proposed that DNA damage may be the main cause of aging [1] ( figure 1). 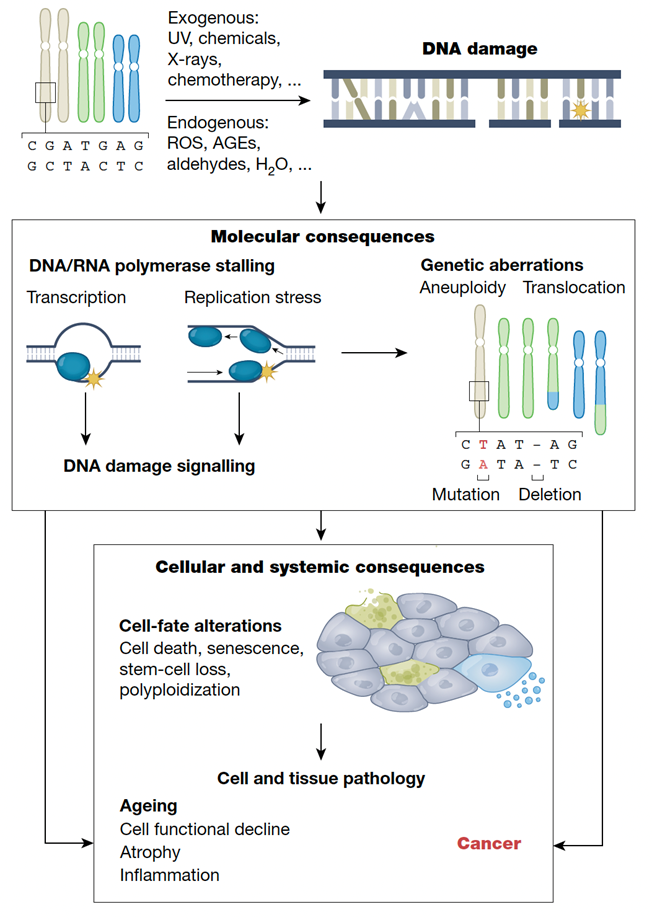 Figure 1 DNA damage is a driver of aging [1]

The effect of DNA damage at the molecular level

Genomic instability refers to the tendency of the genome to mutate, that is, any permanent, transmissible change in the DNA sequence, such as base substitutions, deletions or insertions, copy number variations, chromosomal aberrations, or retrotransposition.

In a broader sense, genomic instability can refer to the chemical modification of DNA’s inherent characteristics, a process commonly referred to as DNA damage, that alters DNA structural and functional properties.

DNA damage includes spontaneous deamination and hydrolysis and many other chemical changes such as different types of breaks, gaps, gaps, abasic sites, adducts and interstrands, intrastrands and DNA-protein crosslinks, and other subtle chemical modification.

During normal aging, DNA damage continues to occur on a large scale due to numerous exogenous and endogenous genotoxins.

It is estimated that as many as 10 5 DNA lesions occur in active mammalian cells every day , and while most of these lesions can be efficiently removed, some lesions that escape detection are unrepaired, repaired too late, or Wrong way to fix. DNA damage inevitably accumulates over time, making genomic instability a true hallmark of aging (Figure 2). 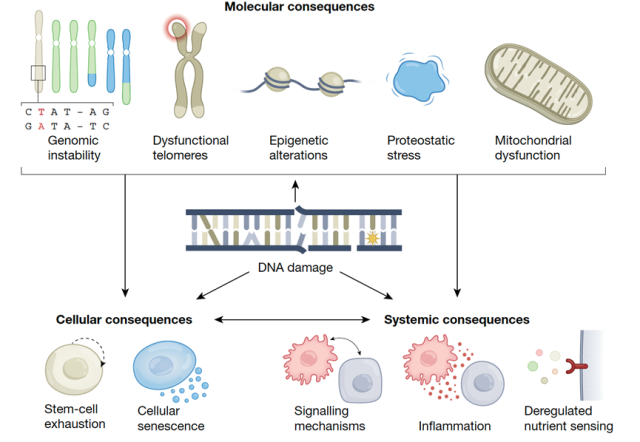 In mammals, telomeres are composed of thousands of repeats of TTAGGG, covered by shelterin complexes, which help to form lariat-like T-loops that hide telomere ends and prevent DNA repair and damage response (DDR) Activation of the sensor [2] .

Due to incomplete synthesis of lagging strands during DNA replication, the number of telomeric repeats decreases with each cell division.

In the germline and some adult stem cells, this loss is compensated by telomerase.

During early development, telomerase is silent in most somatic cells, limiting the number of cell divisions until telomeres become very short.

Telomere length in human tissue does not imply that telomeres become very short in normal aging, even in old age.

However, progressive telomere shortening may alter the expression of specific subtelomeric genes during aging, the in vivo relevance of which has not been established.

The epigenome includes DNA methylation and histone modifications and is unstable throughout the life cycle of somatic cells.

Chromatin modifications include phosphorylation, methylation, acetylation, ubiquitination, sumoylation, citrullination, and poly-ADP ribosylation, most of which also form part of the DDR.

The DNA methyltransferase DNMT1 localizes to DNA repair sites, and many chromatin remodelers regulate the assembly of different repair mechanisms, lesion removal, and restoration of the original chromatin state, which may leave epigenetic marks.

For example, after repairing transcription-blocking lesions in C. elegans, deposition of H3K4me2 promoted the restoration of transcription of genes that regulate protein biosynthesis and homeostasis, resulting in increased lifespan.

These studies demonstrate that the continuous induction of DNA damage and repair of tens of thousands of damages per day leaves epigenetic marks that lead to cell-to-cell epigenetic heterogeneity during aging. 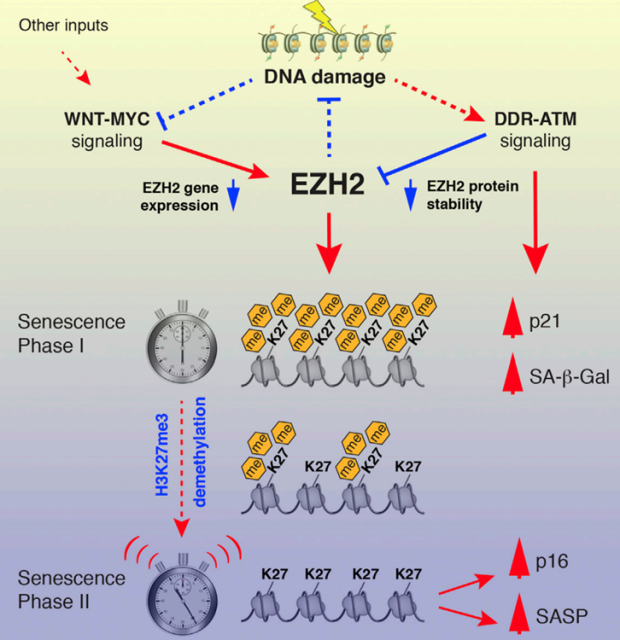 In addition, defects in chaperone proteins, the ubiquitin-proteasome system, and autophagy can lead to the accumulation of misfolded proteins.

DDR itself enables endonuclease inositol-requiring protein 1α (IRE1α) and a key regulator of the endoplasmic reticulum unfolded protein response (ER-UPR), XBP1, to be induced in DNA repair-deficient mice with progeria.

Autophagy is also induced by DNA damage signals and is required for survival in the presence of persistent DNA damage. When unrepaired DNA damage drives cellular senescence, they exhibit a chronic aging-associated secretory phenotype.

Taken together, these observations support a central role for DNA damage, mutation and epimutation as a major cause of proteotoxic stress that increases with age.

As organelles regulating energy and metabolic homeostasis, mitochondria have long been implicated in aging, primarily as a major source of ROS, and in aging-related diseases such as Parkinson’s disease and sarcopenia.

The most prevalent hypothesis for age-related mitochondrial dysfunction is based on the accumulation of somatic mutations in the mitochondrial genome as a result of errors during replication and the absence of most active complex repair pathways in the nucleus.

Increased mtDNA mutations are associated with loss of cytochrome C oxidase activity in aged skeletal muscle fibers, in the substantia nigra and hippocampus of normal aged brains, and in various other tissues. However, it is unclear whether the frequency of such mtDNA mutations during natural aging is sufficient to cause phenotypic effects.

Thus, although the role of mtDNA mutations in aging remains controversial, there are several aspects that have not been well explored, including the effect of DNA damage itself (as opposed to mutation) on mitochondrial DNA replication and transcription, as well as damage in the nuclear genome. Over 1,000 mitochondrial genes.

Cellular senescence permanently inhibits proliferation in response to various stresses, most of which are associated with DNA damage.

Thus, cellular senescence appears to be tightly coupled with the DDR, or, like senescence associated with mitochondrial dysfunction, may be indirectly related to DNA damage.

In addition, accumulation of DNA damage has been observed in HSCs in humans and mice, as well as in muscle, gut, mesenchymal, neural, skin, and germinal stem cells.

The potential role of DNA damage in HSCs is well documented. During aging, HSCs increase in number but decrease in pluripotency, making them more myeloid-prone, and DNA damage is marked in aging HSCs due to replication stress.

Like most adult stem cells, HSCs are predominantly quiescent, which provides some protection against endogenous genotoxic stresses such as metabolic ROS.

Accumulated DNA damage is thus increasingly recognized as a driver of stem cell exhaustion during aging.

DNA damage has systemic effects on the organism through endocrine signaling, inflammatory responses, and metabolic alterations.

The importance of signaling mechanisms in aging has become apparent since mutations in insulin-like signaling (ILS) in C. elegans can extend lifespan.

Several signaling pathways have been shown to regulate lifespan in diverse species including yeast and mammals.

Interventions such as caloric restriction can be anti-aging in part by inhibiting signaling cascades such as the ILS and mTOR pathways [4] (Figure 4).

Instead, inflammatory signals are often thought to promote a range of age-related diseases. 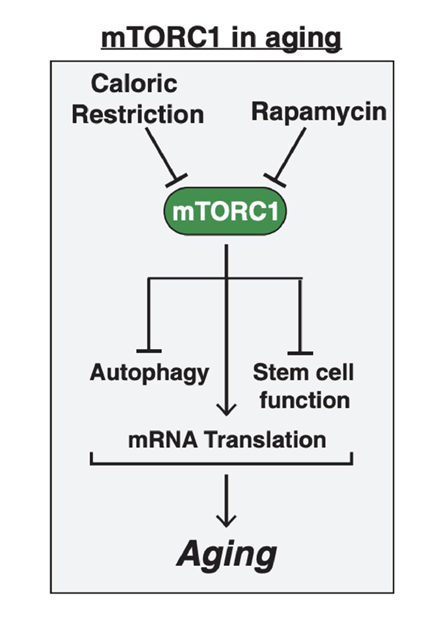 Figure 4: The role of mTOR signaling in aging [4]

Inflammatory responses were also observed in DNA-repair-deficient mice with progeria, and these mice acted as antiaging responses by inhibiting the somatotropin (including ILS), thyrotropin, and prolactin axes.

Thus, the DDR exerts multiple effects on age-related changes in local and systemic communication mechanisms by affecting the inflammatory and endocrine signaling components that influence the aging process.

Nutritional interventions affect aging and longevity in animals. Calorie restriction was the most effective health and longevity intervention, first observed in rats in the 1930s, and this conclusion holds true for species ranging from yeast to mammals.

Caloric restriction may exert its lifespan-extending effects through specific nutrient-sensing pathways, including the mTOR pathway regulated by ILS, sirtuins, and AMPK.

For example, reducing exogenous DNA damage through UV protection and avoiding smoking has been shown to reduce the risk of aging-related diseases.

In addition, dietary interventions may be able to control some endogenous sources of DNA damage, but most spontaneous damage is still unavoidable.

Enhancing DNA repair remains a formidable challenge due to the intricacies of the repair machinery.

Since it was proposed that DNA damage and DNA repair are major determinants of aging, and the discovery that DNA repair defects can accelerate the development of various age-related pathologies, researchers have made great strides in unraveling the relationship between DNA damage and aging.

It provides a direction to further explore the mechanism of DNA damage in the development of aging pathology, solve the aging process from the root, and open up ideas for dealing with aging-related diseases.