In a new study, researchers from the University of Bristol in the UK and Caroline College in Sweden have successfully used a DNA repair tool that could lead to therapeutic changes Gene mutations in debilitating inherited kidney disease in young adults.

The findings were published in the July 22, 2022 issue of Nucleic Acids Research , with the title “Highly efficient CRISPR-mediated large DNA docking and multiplexed prime editing using a single baculovirus”.

In the new study, researchers describe how they constructed a DNA repair tool to repair Podocin deficiency, a common genetic cause of inherited steroid-resistant nephrotic syndrome (SRNS).

Podocin is a protein on the surface of specific kidney cells that is essential for kidney function.

However, the defective Podocin remained inside the cell and never reached the cell surface, eventually damaging the podocyte.

With the disease incurable with drugs, gene therapy to repair the genetic mutation that causes Podocin deficiency offers hope for patients.

These viruses are used as “Trojan horses” to enter cells that carry genetic mutations. The currently dominant systems include lentivirus (LV), adenovirus (AV), and adeno-associated virus (AAV), which are all relatively harmless viruses that readily infect humans.

However, these viruses all share the same limitation, namely the limited space within their viral envelope.

This in turn limits the capacity of the “cargo” they can deliver, the DNA sequences required for efficient gene repair, which greatly limits their application in gene therapy.

By applying synthetic biology techniques, a research team led by Dr Francesco Aulicino and Professor Imre Berger from the University of Bristol’s School of Biochemistry has redesigned baculovirus, an insect virus that is harmless to humans , no longer subject to limited ” cargo” capacity.

“Baculovirus differs from LV, AV and AAV in that it lacks a rigid shell that encloses space for the ‘ cargo’ ,” said Dr. Aulicino . The baculovirus’ shell resembles a hollow rod, it only increases when the ‘ cargo’ increases become longer.

This means that baculoviruses can provide a more sophisticated toolkit for repairing genetic defects, making it more versatile than commonly used systems.

First, the baculovirus must have the ability to enter human cells, which it usually doesn’t do.

The researchers then used their engineered baculovirus to deliver DNA fragments that were much larger than before and integrated these fragments into the genomes of a range of human cells.

The DNA in the human genome consists of 3 billion base pairs, making up about 25,000 genes that encode proteins essential for cell function.

If the wrong base pairs occur in our genes, the wrong proteins are produced, which can make us sick and lead to genetic diseases.

Gene therapy holds the promise of fundamentally repairing inherited diseases by correcting these kinds of errors in our genomes.

Gene editing methods, especially those based on CRISPR/Cas, have greatly advanced the field by enabling gene repair with base pair accuracy.

The researchers used patient-derived podocytes that carry disease-causing errors in their genomes to demonstrate the applicability of their technique.

By building a DNA repair tool that includes protein-based molecular scissors and nucleic acid molecules that guide them and replace the DNA sequences of defective genes, they used an engineered baculovirus to deliver a healthy copy of the Podocin gene while being base-precise It is inserted into the genome basally using CRISPR/Cas.

This can reverse the pathogenic phenotype and restore podocin to the surface of podocytes. 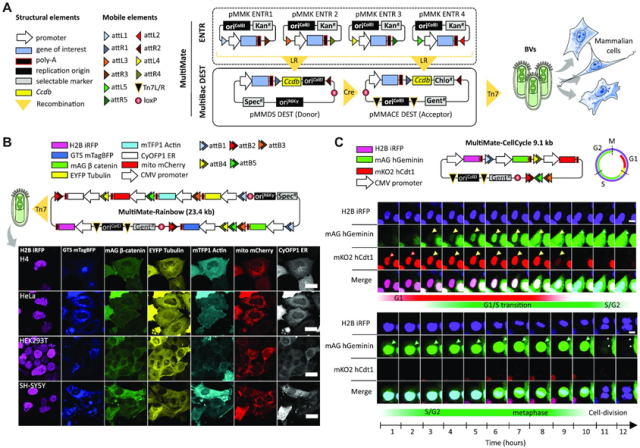 “We have previously used baculoviruses to infect insect cells grown in vitro to produce recombinant proteins to study their structure and function,” explains Prof. Berger.

The method, called MultiBac, developed in the Berger lab, is used worldwide In his laboratory, very large multi-protein complexes with multiple subunits have been fabricated very successfully.

“MultiBac has taken advantage of the flexibility of the baculovirus coat to deliver larger DNA fragments into insect cells grown in vitro, instructing them to assemble our protein of interest.” They began working on building the new system described in this new study when gene therapy for cells was used.

Dr Aulicino added, “There are many avenues that can take advantage of our system. In addition to podocin repair, we can demonstrate that by using our baculovirus delivery system and the latest editing technologies available, we can simultaneously and efficiently correct different loci on the genome. many mistakes.”

Co-author Professor Moin Saleem from the University of Bristol said: “SRNS is one of the more common genetic disorders affecting the kidneys. SRNS is characterized by kidney failure at an early stage, resulting in a severe reduction in the quality of life of those affected . “

Co-author Professor Gavin Welsh from the University of Bristol concluded, “These results are very encouraging. The new approach pioneered by Berger’s team holds promise for not only treating SRNS but also a range of other genetic diseases of the kidneys. There is also hope that in these diseases, efficient gene repair is not feasible with current technologies. Bringing the new vector system to clinical application is a long road, but we believe the advantages it offers make it a Very worthwhile research work.”