Cell | The Secret of Mosquito Receptor Expression: Why Do Mosquitoes Look for You? 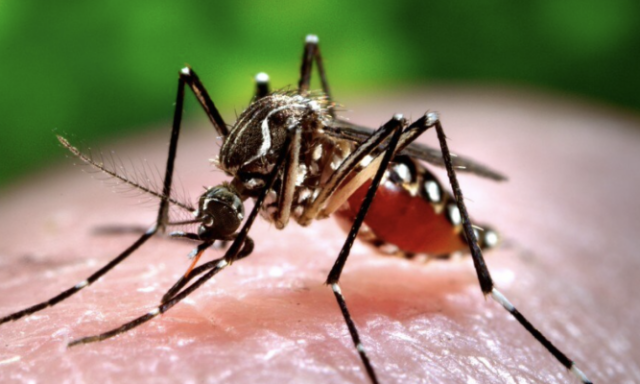 Aedes aegypti is a long-term enemy of mankind, feeding on human blood and spreading insect-borne diseases. But how mosquito sensory receptors are expressed and organized is not well understood.

In order to uncover the answer to this question, on August 18, 2022, Meg A. Younger ‘s research group at The Rockefeller University published an article Non-canonical odor coding in the mosquito in Cell , through CRISPR-Cas9-based endogenous knockout Encoding, electrophysiological analysis, and single-cell nuclear RNA sequencing reveal a non-canonical odor-encoding neuronal system in mosquitoes.

The convenience of transportation, the increase in population and the rise in temperature have led to the spread of a variety of new pathogenic pathogens caused by arthropods such as mosquitoes. Diseases include dengue, Zika, and yellow fever. Female Aedes aegypti needs blood to reproduce, and mosquitoes prefer to bite humans compared to other animals [1] .

Mosquitoes identify humans primarily through chemical scent cues such as carbon dioxide and human odors, also known as “human scents.” Human odor is a mixture of hundreds of different odors, including hairy amines such as 1-octen-3-ol [2] .

The one-to-one correspondence between a receptor, a neuron and a glomerulus (”one-receptor-to-one-neuronto-one-glomerulus”) is considered to be the basic working principle of the olfactory system.

This assembly method has been verified in Italian bees, fruit flies and tobacco hawkmoths, but whether the principle is the working principle of the Aedes aegypti olfactory system is unknown. 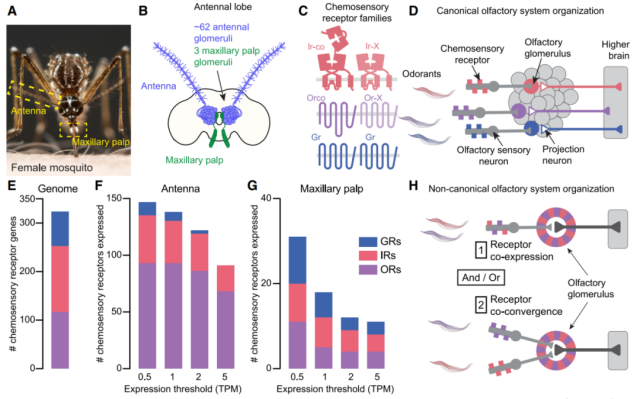 In Aedes aegypti, olfactory cues are sensed by the antennae and maxillary tentacles (Fig. 1) .

Through analysis of antennal and maxillary tentacle RNAs-seq data, the authors identified 324 structural genes for chemoreceptors in Aedes aegypti, including 117 OR genes, 135 IR genes, and 72 GR genes.

Therefore, this mismatch in Aedes aegypti indicates that there are multiple receptor neurons in each neuron that collectively converge in a single globule, or that sensitive smell is achieved through co-expression and co-convergence.

To identify the corresponding mechanism of the olfactory system in Aedes aegypti, the authors used CRISPR-Cas9 endogenous knock-in to label subpopulations of olfactory neurons. Additionally, the authors visualized axonal projections via the QF2-QUAS system.

Orco is an OR gene and Ir25a is an IR gene. The olfactory glomeruli expressed by these two genes are highly overlapping, so the authors wondered whether the two were expressed in the same neuron or if the neurons expressing each converged into a single olfactory glomerulus. .

For this the authors used the split-QF2 system.

The system divides transcription factor QF2 into two parts, the DNA-binding domain QF2-DBD of QF2 and the activation domain QF2-AD, each labeled with a synthetic leucine zipper, when the two domains are in the same When expressed in a cell, a functional QF2 is formed via a leucine zipper, which initiates the expression of QUAS.

Thus, the authors found that the two genes were widely co-expressed in individual neurons.

Through RNA in situ hybridization experiments, the authors also confirmed the co-expression of Orco and Ir25a as well as Orco and other ion receptor proteins Ir8a and Ir76b.

Furthermore, by snRNA-seq, the authors found that antenna neurons are highly diverse, and among them, multiple ligand-selective receptors are co-expressed, and multiple chemosensory receptors are also co-expressed in the maxillary tentacles.

This co-expression or synergistic expression expands the response function of olfactory neurons. 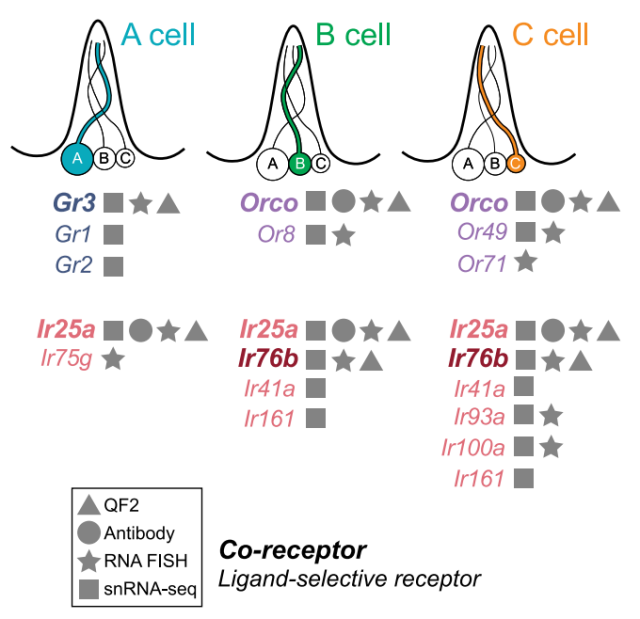 Overall, this work found that unlike the traditional one-to-one relationship between sensory neuron receptors and olfactory glomeruli, olfactory neurons in Aedes aegypti are able to express multiple chemoreceptors, and in vivo electrophysiology also shows that mosquito olfactory The broad ligand sensitivity of neurons relies on this atypical co-expression (Fig. 2) .

The redundancy provided by the olfactory system, in which neurons co-express multiple chemosensory receptors, increases the sensitivity of the mosquito olfactory system and explains why it has long been difficult for humans to interfere with mosquito detection of humans.