As we all know, the immune system is the most important defense system of the body, and the immune cells responsible for carrying out the immune response and immune function build the strongest defense line for our health.

However, cytotoxic CD8+ T cells responsible for killing cancer cells or virus-infected cells are also “exhausted” in the long-term response to antiviral and chronic infections , which is associated with inhibitory receptors (including PD- The increased expression of 1) is associated with impaired cytokine production, resulting in the loss of effector function of CD8+ T cells.

In fact, T cell depletion is one of the mechanisms that have evolved to prevent the destruction of the immune system, commonly seen in cancer or AIDS patients, as well as in patients with chronic liver disease caused by viral infections , as tumors and viruses also use this mechanism for immune escape .

So, does this mean that T cells lose their immune function after being “exhausted”?

Subsequently, the team of Professor Axel Kallies from the Department of Microbiology and Immunology at the University of Melbourne demonstrated that not all T cells are depleted and dysfunctional in patients with chronic disease.

On August 17, 2022, the team of Professor Axel Kallies and the team of Dr. Veit Buchholz published a research paper entitled: MYB orchestrates T cell exhaustion and response to checkpoint inhibition in Nature .

The study builds on previous work with an in-depth study of T PEX cells .

They found that this subpopulation of T cells is like a source of youth for T cell immunity, with self-renewal, pluripotency, and long-term proliferation after T cell depletion.

These findings not only explain why immunotherapy is ineffective for some patients, but also provide important information for the development of more effective immunotherapies against cancer or severe viral infections. 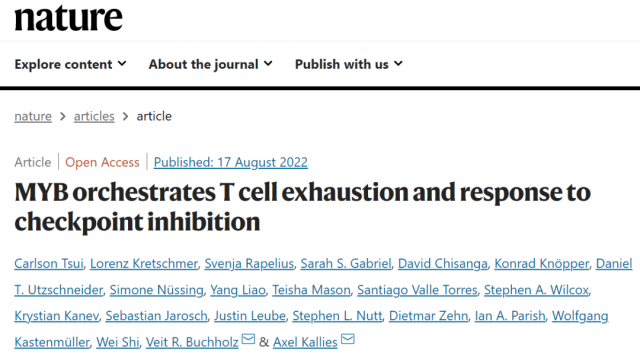 The success or failure of immunotherapy for cancer or chronic infection depends on the quality of the CD8+ T cell response.

The team has previously pinpointed T PEX cells that are critical for maintaining a good immune response and demonstrated that they and depleted effector T (T EX ) cells are controlled by specific transcriptional and metabolic networks that support their differentiation and maintenance.

In the new study, they found that the long-term proliferative potential, pluripotency and regenerative capacity of T cells depleted during chronic infection were selectively conserved in a small population of transcriptionally distinct CD62L+ T PEX cells. The researchers propose to refer to these cells as ” stem-like-exhausted T (T SLEX ) cells .”

And this study tells us that without MYB , the transcription factor, immunotherapy fails.

Experiments in mice confirmed that mice lacking MYB in T cells succumbed to chronic but not acute viral infection, underscoring that T cell depletion is a necessary adaptation to chronic infection.

Thus, MYB represents a transcriptional checkpoint that directs the differentiation and function of CD8+ T cells in response to severe or chronic infection.

Furthermore, T SLEX cells are the only source of cells that mediate the proliferative burst in response to PD-1 checkpoint inhibition .

These findings advance the understanding of the mechanisms of T cell reactivation in the context of checkpoint inhibition.

According to the team, two core but seemingly unrelated properties of T cell exhaustion, limited function and lifespan, are closely related to a single transcription factor, MYB.

This is a prime example of evolutionary “thrift”, which ensures continued immunity of T cells during chronic infection while preventing collateral damage to the host.

Currently, immunotherapy has only been successful in some cancers, and it is only effective in a small percentage of patients, says Professor Axel Kallies .

We hope that an understanding of the mechanisms of T cell activation will help develop better targeted therapies to improve outcomes in viral infections and cancer treatment.

How do T cells overcome fatigue?