The microbiome (and the “polymorphic microbes” within it) are considered an emerging hallmark of cancer.

Microorganisms may directly cause cancer, influence host immune responses to promote malignancy, and may be key effectors determining the efficacy of anticancer treatments.

Modulation of the microbiome holds promise as an opportunity to influence cancer prognosis.

In 2000, Douglas Hanahan and Robert Weinberg published the seminal paper The hallmarks of cancer, conceptualizing six core rules for the multistep transformation of normal cells into malignant cells.

More than 20 years later, in the third update, “Hallmarks of cancer: new dimensions,” these 6 initial traits have been expanded to 14, with the latest addition of 4 emerging and enabling traits that unlock phenotypic plasticity , non-mutation epigenetic reprogramming, senescent cells, and the polymorphic microbiome . 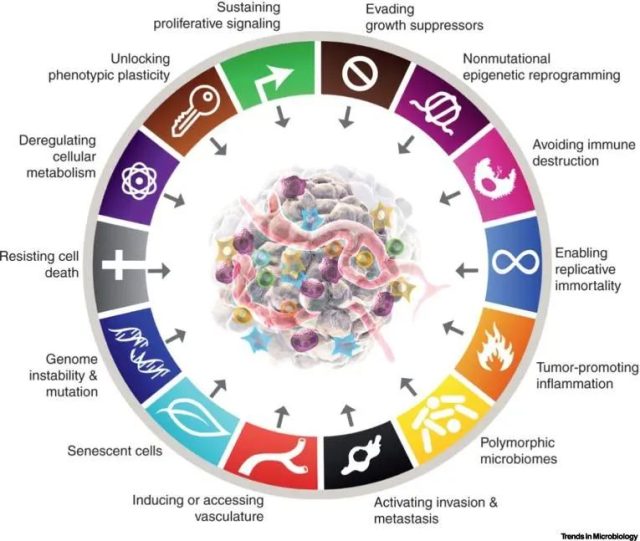 The addition of polymorphic microorganisms demonstrates the growing recognition that complex microbial ecosystems (or “microbiome”)—including bacteria, fungi, and viruses associated with human symbiosis—have a profound impact on cancer pathogenesis.

Furthermore, the microbiome directly interacts with other established cancer hallmarks, such as tumor inflammation, avoidance of immune destruction, genomic instability, and resistance to anticancer therapy.

The most important evidence for this combined effect comes from studies of microbes within the gastrointestinal tract (gut microbiome), as this is the most widely characterized region.

Recently, however, there has been a growing awareness of the role of polymorphic microorganisms in other tissues or organs, including those on other mucosal surfaces or in contact with the external environment (such as the skin, genitourinary tract, and lungs), as well as those living within tumors. Tissue or organ (intratumoral microbiome). 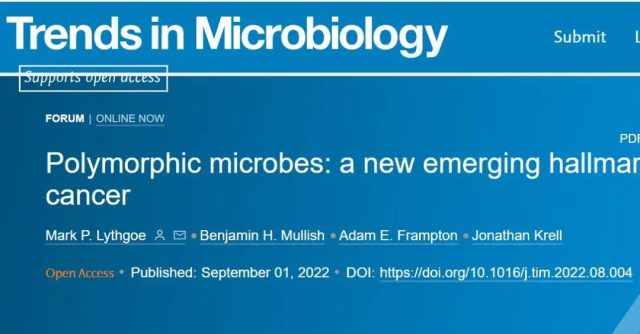 It is estimated that the human body contains about 4×10 13 kinds of microorganisms.

Over 97% of the microbiome is composed of bacteria in the colon, and the high density is thought to drive most of the known microbial immunomodulatory effects.

Growing evidence suggests that pleomorphic microbes in the gut play a key role in cancer pathogenesis, from tumorigenesis to determining the efficacy of anticancer treatments.

In addition, disturbances of the gut microbiota or dysbiosis caused by infection or antibiotic administration have consistently been associated with carcinogenesis in the colon and beyond.

Nonetheless, of the approximately 10 12 different microorganisms on Earth , only 11 have been identified as direct human carcinogens (cancer microorganisms), for example some strains of Escherichia coli produce potent DNA alkylating agents associated with colorectal cancer.

Bacillus actin. More typically, gut microbes are “colluding” in that they do not independently cause cancer, but instead promote other cancer hallmarks.

Furthermore, bacteria may act synergistically in the “driver-passenger” relationship to trigger and maintain carcinogenesis.

Preclinical and clinical evidence suggests that the impact of gut microbes on systemic immunity is widespread.

The gut microbiome has been shown to have broad effects on both the adaptive and innate immune systems, resulting in the expression of multiple chemokines and cytokines associated with the tumor-promoting and tumor-antagonizing immune microenvironments.

At the same time, the unique microbiota of individual patients modulates other cancer characteristics, such as triggering tumor inflammation, evading adaptive immune destruction, and responsiveness to anticancer therapies, providing insights into modulation as a potential anticancer therapeutic strategy .

Regulation of the gut microbiome

Despite extensive preclinical evidence that microbiota modulation approaches are beneficial in cancer, they have not yet been implemented into commercial therapies.

However, several proof-of-concept clinical studies have emerged that demonstrate the potential of FMT, LBP, and dietary modification to enhance the efficacy of cancer treatment, mainly focusing on ICIs.

All tissues and organs exposed to the external environment are colonized by different microorganisms.

The microbiota present at these locations varied considerably based on a variety of factors, including gender, age, and environment.

There is growing evidence that tissue-specific microbiomes (eg, in the vagina) harbor microorganisms that may contribute to or prevent cancer.

Characterization of the tumor microenvironment (TME) consistently detected the presence of microorganisms within the stroma, immune cells, and cancer cells. Until recently, this low microbial biomass posed significant challenges for analysis.

The pooled evidence shows that approximately 1 bacterial cell is present in the TME for every 147 cancer cells.

More than 500 different bacteria have been identified, and each tumor type analyzed shows a unique and precise pattern that may help elucidate some of the more difficult-to-characterize cancer subtypes (eg, cancers of unknown primary site) .

Studies have demonstrated that the intratumoral microbiota can modulate the immune phenotype, promote metastasis, and determine the response to anticancer therapy.

However, further work is needed to confirm these findings more broadly.

Polymorphic microbes are potential tools and quasi-independent variables in cancer development, progression, and response to therapy.

The use of microbes as an emerging and favorable cancer marker reflects the growing understanding and appreciation of the important role that microbes play in cancer.

A better understanding may have opportunities to improve treatment from prevention to advanced disease.