Twelve patients with end-stage liver disease will try a first-of-its-kind treatment over the next few months.

Scientists will inject healthy liver cells into their bodies, and when they mature, a patient will have up to five newly grown miniature livers.

This clinical trial was initiated by LyGenesis, an American biological company. According to a report by MIT Technology Review on August 30, subjects will be divided into three groups of “low”, “medium” and “high” doses. In this state, up to 250 million liver cells will grow and develop in their lymph nodes to replace the necrotic liver.

If the trial is successful, the technology would be “revolutionary”, requiring minimally invasive procedures and an estimated one donor liver could be used for up to 75 patients, the report said.

Using the human body’s ‘incubator’ to regenerate the liver

The liver is so regenerative that even if half of it is removed, the remaining healthy tissue can return to the size of the original liver within a few months.

But if liver damage is too severe, a liver transplant may be the patient’s only option.

But there are some people, especially those who are elderly, with comorbidities, etc., whose health does not necessarily support a transplant.

At the same time, suitable liver transplants do not always appear in time. The 12 patients with end-stage liver disease in this trial were also not eligible for liver transplantation.

So, according to the trial plan, scientists first isolate liver cells from donated livers and inject them into lymph nodes near the damaged livers of patients.

The damaged liver tissue then releases stress signals that direct new liver cells to “incubate” and grow in the lymph nodes, eventually developing into a brand new miniature liver.

It is reported that the first patient to participate in the trial is from Boston, USA, and he will receive a dose of 1ml in the near future – about 50 million healthy liver cells. If there were no potential safety concerns for a week, the second volunteer started treatment, and so on.

This is just the beginning, the last “high-dose group” will be injected with 250 million healthy liver cells, distributed in five lymph nodes, and if all goes well, they will grow five miniature livers.

The lymph node was chosen as an “incubator” because it is a place in the body where cells divide rapidly and has a good blood supply.

“The lymph node not only provides a suitable growth environment for immune cells and metastatic tumor cells, but also promotes health. The survival and proliferation of organ cells and tissues,” said Professor Eric Lagasse, a stem cell biologist at the University of Pittsburgh.

Based on the results of previous animal experiments, LyGenesis CEO Michael Hufford said that over time, the lymph nodes disappear completely, leaving a highly vascularized miniature liver that filters the animal’s blood supply to support the function of the native liver. .

In the human body, it will replace the diseased liver to function and prolong the patient’s life.

Professor Eric Lagasse said that there are “regulators” in the human body to control liver growth, and once the new mini-liver has developed enough to use, its size will not continue to expand.

Animal experiments have achieved a series of success

The idea for this technology began with a series of studies ten years ago. Professor Eric Lagasse is one of the inventors and the co-founder of LyGenesis.

In 2012, a study published by him and his team in “Nature Biotechnology” found that after 12 weeks of injecting liver cells into the lymph nodes of diseased mice, “liver clots” regrew, and the mice also recovered from lethal liver function. Relief in exhaustion.

In order to further promote clinical translation, LyGenesis was officially established in 2017. In recent years, the team of Professor Eric Lagasse has achieved success in animal experiments – they have grown new miniature livers in mice, pigs and dogs, while continuously optimizing Cell products, and corresponding dosing procedures.

In the pig study, the researchers induced liver damage in pigs and then injected healthy liver cells at doses ranging from “360 million per 3 lymph nodes” to “1.8 billion per 18 lymph nodes.”

All pigs recovered from liver damage within a few months.

The autopsy revealed that new miniature healthy livers had grown in the lymph nodes, each about 2 percent the size of the liver in situ. 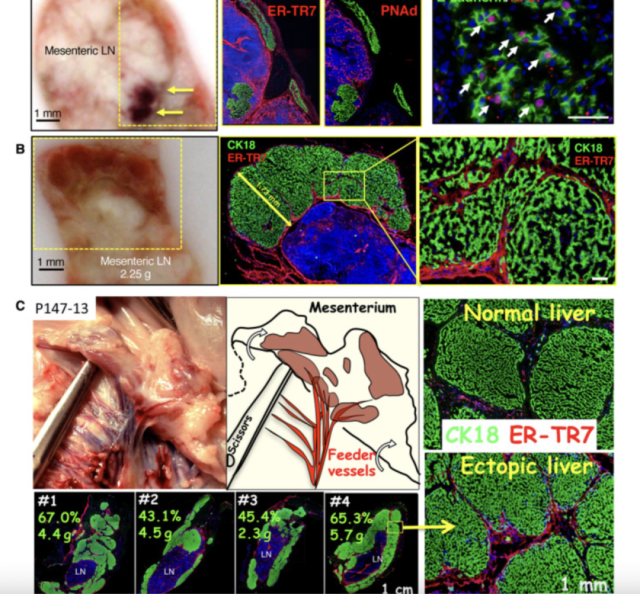 In experiments with mice, the team also found that if enough healthy tissue remains in the damaged liver, some of the newly engrafted liver cells migrate from the lymph nodes back to the liver in situ, helping it to regenerate and heal.

At this point, the new mini-liver will shrink accordingly, keeping the total amount of liver tissue in balance.

A number of other animal studies have successively demonstrated the mechanism and results that it is possible to use lymph nodes as bioreactors for the cultivation of functional heterotopic organs.

It is reported that patients in this trial will be closely monitored. Researchers will assess blood samples for signs of improved liver function, while tracking any potential improvements in quality of life. “Each patient has a full year of study,” says Michael Hufford. “We hope to do it in less than two years.”

What organ do you want to grow?

It is worth noting that the healthy liver cells used in this clinical trial are all from those unqualified “donor livers”-that is, livers that have been donated but partially damaged and whose quality does not meet the transplantation standards.

This is also a highlight of the therapy, which can maximize the use of donated organs that are already in short supply. “My view is that one (healthy) liver cell is enough,” says Prof. Eric Lagasse. “Given enough time, that cell will grow and multiply, eventually producing an ectopic liver.”

Statistics show that in 2019, more than 40,000 citizens around the world donated organs after their death, but only about 10% of the organ transplant needs can be met.

In addition to the liver, the same technology applies cells from other organs to lymph nodes to grow new thymus, kidneys and pancreas, according to the company’s current pipeline.

In 2019, the team published a paper in the Journal of Tissue Engineering and Regenerative Medicine, showing that human ectopic kidneys can also use lymph nodes as bioreactors to grow tissue.

In other small animal experiments, the researchers grew ectopic thymus glands and pancreatic islet B cells, the former for thymic disease and the latter for blood sugar control.

“If subsequent human trials are successful, this cell therapy may be realized faster than 3D printed organs, and the treatment effect is better.” The head of the company said.

One problem is that even if it’s not a “complete transplant,” immune rejection still exists. In clinical trials, even for life after treatment, these 12 patients still needed to take immunosuppressive drugs. Based on this, LyGenesis announced a collaboration with another regenerative medicine company, iTolerance, which is currently developing a technology that “enables ectopic livers to grow without the need for immunosuppression.”

It is unclear when the technology will be available and whether it will work. According to iTolerance’s website, the technology “has generated in vitro data and is advancing proof-of-concept work in small animals.”

references:
[1] First-of-its-kind trial will attempt to grow mini livers in people, https://www.freethink.com/health/mini-livers
[2] This company is about to grow new organs in a person for the first time, https://www.technologyreview.com/2022/08/25/1058652/grow-new-organs/
[3] Bizarre new clinical trial will make patients grow tiny livers inside their bodies, https://bgr.com/science/bizarre-new-clinical-trial-will-make-patients-grow-tiny-livers-inside-their -bodies/