Japan starts the vaccination by new vaccines against COVID-19 Omicron.

In order to cope with the spread of infection at the end of the year and the beginning of the year, the inoculation of the COVID-19 virus Omicron strain began on the 20th.

All people over the age of 12 who have completed two doses of the vaccine are eligible to receive the vaccine, provided that at least five months have passed since the last dose of the vaccine.

Starting from the fourth time the elderly and medical staff were not received, until mid-October, the local governments will gradually expand the target as appropriate. 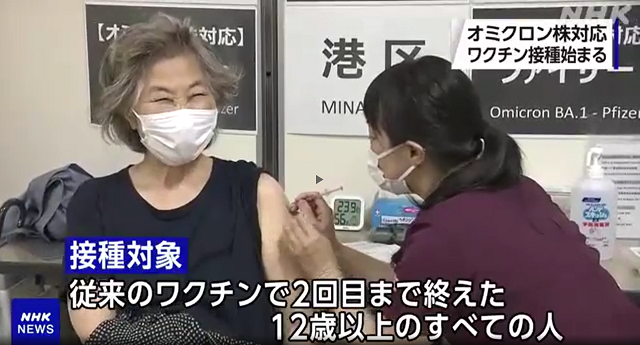 In Minato Ward, Tokyo, from the 20th, elderly people over 60 years old and medical staff who made an appointment in advance visited the vaccination site in the morning, received interviews, and were vaccinated.

Other local governments will also start as soon as they are ready.

Regarding the Pfizer and Moderna vaccines used, the Ministry of Health, Labour and Welfare expects resistance to the Omicron strain to be more effective than conventional vaccines, and likely to be effective against future mutant strains.

Minister of Health, Labour and Welfare Kato “For those who want to be vaccinated this year, more than 1 million vaccinations per day”

At a news conference after the cabinet meeting, Health Minister Kato said, “Coronavirus is epidemic every year at the end of the year. I want to be prepared,” he said. 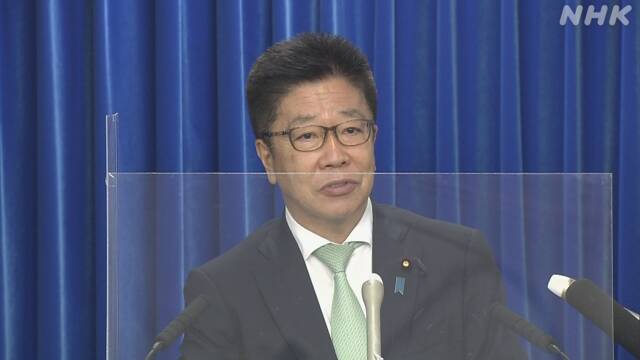 In addition, he said, “In order to reduce the burden on the region and promote vaccination, we will prepare occupational vaccination, which will be implemented from the end of next month. We hope to develop a system of more than 1 million daily doses and accelerated vaccination,” said.

Professor Akihiko Saito of Niigata University, a pediatrician who is familiar with vaccines and a pediatrician, said about the vaccine for the Omicron strain, “First of all, this vaccine should be emphasized for its ability to prevent aggravation. It is known that this vaccine does not have a long-lasting effect in preventing infection and onset, but it is thought that a vaccine for the Omicron strain will have a slightly longer effect. Now, the Omicron strain “BA.5” has become mainstream. However, the effect of immunity against new types that will appear in the future can also be expected. Since the safety is basically the same as the COVID-19virus vaccine that has been inoculated so far, it is unlikely that any new side effects may occur. It’s hard to imagine,’ he says.

Regarding when and which vaccine to inoculate, “If there is an opportunity to inoculate a vaccine for the Omicron strain, I think that you can expect a greater effect by inoculating it. However, basically, from the previous vaccination. The principle is to get vaccinated as soon as possible after five months have passed.You never know when the next wave of infections will come, so don’t assume that the epidemic will come in the winter and prepare for it. It is necessary to keep it,” he pointed out.

Tetsuo Nakayama, a specially appointed professor at Kitasato University who specializes in clinical virology and is familiar with vaccines, said, “There is an option to inoculate with conventional strain vaccines, but vaccines containing ingredients for Omicron strains are more effective. Considering the risk of infection, it is basic to get vaccinated if there is a chance to prevent it with a vaccine, but looking at the current infection situation, the number of new infections is decreasing, so it is important to pay attention to infection control. If possible, I think there is an option to wait until a vaccine for the Omicron strain is available.”

In addition, Professor Nakayama said, “Overseas, clinical trials are being conducted with a range of vaccination intervals, such as 3 to 6 months. After 3 months, the immune function such as antibodies declines, and if you wait until 5 or 6 months, the risk of reinfection increases, so you should be able to vaccinate at shorter intervals. I want you to think about that,” he said.

Pfizer, a major pharmaceutical company in the United States, has released two types of Omicron strains, “BA.5” and “BA. We are applying to the Ministry of Health, Labor and Welfare for approval of a bivalent vaccine for 4/5.

In addition, Moderna has announced that it will apply for approval of the same type of vaccine in the near future.

Regarding this vaccine, in the United States, the CDC = Center for Disease Control announced on the 1st of this month that it will be officially recommended, but in Japan there is no specific prospect of pharmaceutical approval yet.

On the other hand, this time, the vaccination started in Japan is a bivalent vaccine containing the component corresponding to the Omicron strain “BA.1” and the component of the conventional vaccine, and it is also used in the UK and Canada.

About the effect According to the Ministry of Health, Labor and Welfare, the inclusion of two types of ingredients regardless of the type of Omicron strain is more effective than conventional vaccines against Omicron strains, and the virus may mutate. So, it is expected that there is a high possibility that it will be effective for future mutant strains.

In addition, in preparation for the spread of infection, which is a concern during the year-end and New Year holidays, I would like you to get a vaccine for the Omicron strain that can be inoculated at that time.

The new vaccine is a type called a “bivalent vaccine” that contains two types, the component corresponding to the Omicron strain “BA.1” and the original vaccine that has been inoculated so far.

According to the package insert of Pfizer’s vaccine, when used as the fourth inoculation in a clinical trial targeting people aged 56 and over, the neutralizing antibody value that suppresses the action of the “BA.1” virus is higher than that of the conventional vaccine. This means that it increased by 1.56 times compared to when using .

Also, according to the announcement in June this year, although the antibody value against “BA.5” was one-third the level of “BA.1”, it effectively suppressed the action of the virus.

According to the package insert of the vaccine, the main side effects are pain at the site of vaccination in 58.1%, fatigue in 49.2%, headache in 33.6%, fever of 38 degrees or higher in 5%, and side effects can appear the next day. In most cases, it lasts for 1 to 2 days.

In addition, according to a paper published by Moderna in the medical journal “New England Journal of Medicine”, as a result of a clinical trial conducted in the United States, when used as the fourth inoculation, neutralization against “BA.1” It is said that the antibody value increased 1.75 times compared to using the conventional vaccine.

The value of neutralizing antibody against “BA.5” is said to have increased to 1.69 times that of the conventional vaccine.

Adverse reactions were mostly mild to moderate, similar to previous vaccines, with 77% having pain at the injection site, 55% having malaise, 44% having headaches, and 4% having a fever of 38 degrees or higher. I’m assuming.

On the other hand, this year, in response to the influenza epidemic in Australia in the southern hemisphere, where the season is opposite to that of Japan, it has been pointed out that influenza and the COVID-19 may be prevalent in the northern hemisphere at the same time. It is said that there is a possibility of being vaccinated at the same time as the vaccine.

Overseas research groups have reported that there were no problems with safety or efficacy when the corona and influenza vaccines were administered at the same time.

According to the research group, as a result of statistical analysis, the rate of systemic symptoms was slightly higher when inoculated at the same time, but there were no major safety issues.

In addition, according to a paper summarizing three clinical trials conducted in the United Kingdom and the United States in March this year by an Italian research group, the frequency of side reactions and the incidence of the COVID-19virus There was no significant difference in antibody levels against

The Ministry of Health, Labor and Welfare forecasts that the supply of influenza vaccines for this year will be the largest ever, equivalent to about 70.42 million adults, and that simultaneous vaccination will not be a problem.

Akihiko Saito, a pediatrician and professor at Niigata University who is familiar with vaccines, said, “While we don’t know when the next epidemic of the COVID-19 will be, the influenza epidemic starts in November and December, and peaks in January and February. There is an annual pattern of welcoming the new year.It is important to firmly prevent the two infectious diseases.”