What is systemic lupus erythematosus?

The etiology of systemic lupus erythematosus has not yet been confirmed.

A large number of studies have shown that genetic, endocrine, infection, immune abnormalities and some environmental factors are related to the pathogenesis of this disease.

Under the interaction of various factors such as genetic factors, environmental factors, and estrogen levels, T lymphocytes decrease, T suppressor cell function decreases, B cells overproliferate, and a large number of autoantibodies are produced, which combine with the corresponding autoantigens in the body to form The corresponding immune complexes are deposited in the skin, joints, small blood vessels, glomeruli and other parts.

With the participation of complement, it can cause acute and chronic inflammation and tissue necrosis (such as lupus nephritis), or antibodies directly interact with tissue cell antigens, causing cell destruction (such as the binding of specific antigens of red blood cells, lymphocytes and platelet walls to corresponding autoantibodies) , respectively, causing hemolytic anemia, lymphopenia and thrombocytopenia), resulting in multi-system damage to the body.

The general treatment of systemic lupus erythematosus includes psychological and spiritual support, avoidance of sun or ultraviolet radiation, prevention and treatment of infection or other comorbidities, and appropriate exercise according to the condition.

The main adverse reactions are cardiac conduction disturbance and retinal pigmentation, and electrocardiogram and ophthalmological examination should be performed regularly;

(3) Glucocorticoids should be selected in different doses and formulations according to the condition.

③Methotrexate (MTX) is administered intravenously or orally. It is effective for arthritis, serositis and fever. The dose of methotrexate needs to be reduced for those with renal impairment. Occasionally, adverse reactions of enhanced photosensitivity may occur.

④ Oral cyclosporine A (CSA) is currently mainly used for SLE patients who are ineffective against other drug treatments. ⑤ Vincristine, effective for thrombocytopenia.

Other treatments: high-dose immune globulin pulse, plasma exchange, suitable for critically ill patients, those who cannot be controlled or tolerated by conventional treatment, or those who have contraindications .

⑤ other Such as anticoagulants, whole body lymph node irradiation and traditional natural therapy, renal insufficiency can be treated with dialysis.

In this latest paper, the research team reported that 5 patients with refractory systemic lupus erythematosus were treated with CAR -T cells . Drug-free remission was achieved .

In SLE patients, B cells often respond to antigens earlier than the onset of clinical symptoms, so blocking B cells to alleviate the progression of SLE is a promising therapeutic strategy.

The researchers applied CAR-T , a common anti-cancer method, in the clinical treatment of SLE , but this time the target of CAR-T therapy was changed from cancer cells to B cells that produce autoantibodies . These CAR-T cells are engineered to eliminate antibody-producing B cells by targeting the CD19 protein produced on the surface of B cells . 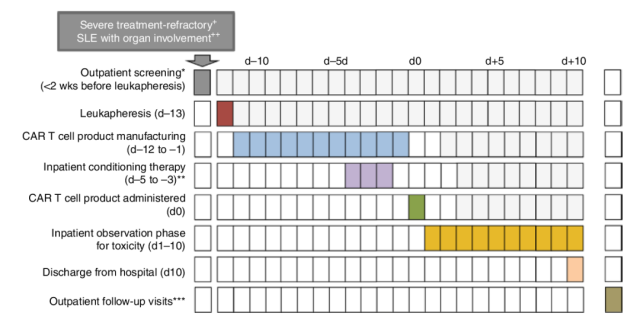 After all five patients with refractory SLE received CD19 CAR-T therapy, the researchers observed rapid and sustained remission of B cell-mediated autoimmune responses in all patients.

In vivo CAR-T cell expansion and B – cell clearance kinetics showed that CAR-T cells accounted for only a small fraction of circulating T cells after the first day of administration .

Patients’ cells subsequently expanded rapidly, peaking on average at day 9 , with 11% to 59% of all circulating T cells being CAR .

Compared with T cells not expressing CAR , the phenotype of CAR-T cells was transferred to central memory T cells in vivo, suggesting their circulation to lymphoid organs and other tissue sites.

From the second day after CAR-T cell administration , B cells completely disappeared from the peripheral blood of patients. In contrast, other cell lineages such as CD4+/CD8+ T cells, monocytes, and neutrophils showed only transient reductions. 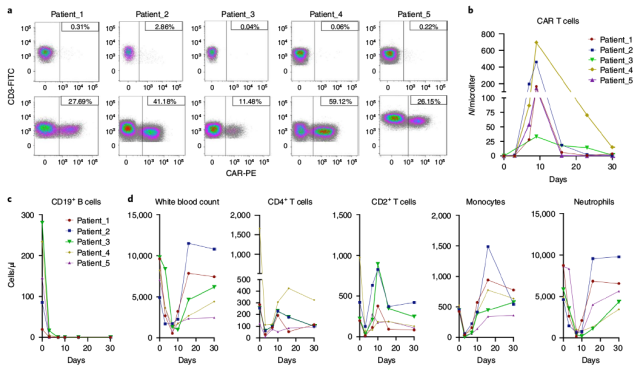 After long-term follow-up, the researchers confirmed the disappearance of anti-double-stranded DNA antibodies (antibodies specific to SLE ) in 5 patients , and the overall reduction of autoantibodies .

In addition, all patients developed B -cell reconstitution after an average of 110 ± 32 days , but no recurrence of SLE was observed during follow-up , and these patients did not receive any SLE -related medical therapy during this period.

These data confirm the significant efficacy of CD19CAR-T in SLE

This trial also evaluated the safety and related adverse reactions of CAR-T therapy in patients with SLE .

Five SLE patients had no or only mild cytokine release syndrome ( CRS ), three of whom developed febrile symptoms ( CRS grade 1) that resolved with medication ; none of the patients developed immune effector cell-related neurotoxicity syndrome Signs ( ICANS ).

In conclusion, this study shows that CD19CAR-T therapy not only effectively eliminates B cells that produce autoimmune antibodies, but also enables SLE patients to achieve treatment-free remission, and the therapeutic effect persists even after B cell reconstitution in patients .

Although these findings provide a potential new treatment option for SLE patients, longer follow-up in larger clinical trials is needed to determine the safety and efficacy of CAR-T cell therapy in this setting. curative effect.