Why did monkeypox break out? “Nature” sub-journal: or related to the adaptive evolution of APOBEC3 gene

Recently, an article entitled Mechanisms of APOBEC3 mutagenesis in human cancer cells published in the sub-journal of “Nature” elaborated on the mechanism of action and confirmed the possibility of monkeypox virus prevention and treatment. and sex.

Isidro J et al. found a mutational bias (from GA to AA or TC to TT) in the monkeypox genome driven by the apolipoprotein B mRNA-editing catalytic polypeptide-like 3 (APOBEC3) enzyme , possibly a PHEIC (WHO International Public Health emergency) .

On July 20, Mia Petljak and others from MIT and Harvard University Research Institute published an article entitled Mechanisms of APOBEC3 mutagenesis in human cancer cells in “Nature”, establishing the human tumor cell genome and endogenous Contact for APOBEC3.

The researchers knocked out APOBEC3A and APOBEC3B genes from a series of cancer cell lines, and found that these cancer cell lines developed APOBEC3-related mutations over time, and that APOBEC3B is a cytosine deaminase targeting linear and hairpin structures. main source.

There have been reports of recent epidemiological investigations and clinical features of monkeypox.

According to an article published in The Lancet, among 54 monkeypox cases, 44 (82%) had prodromal symptoms of varying degrees, and 13 (24%) were HIV-infected.

In another study published in the New England Journal of Medicine, the majority of 528 monkeypox patients exhibited systemic clinical features, including fever (62%) , lethargy (41%) , myalgia (31%) , and Headache (27%) , of which 41% were human immunodeficiency virus (HIV) -infected.

In the above-mentioned studies, 94% and 73% of monkeypox patients, respectively, had different degrees of skin lesions on the genital or perianal skin, rather than generalized skin lesions. Lesions in these uncommon parts of the body can cause most patients to delay treatment and be misdiagnosed as STDs. 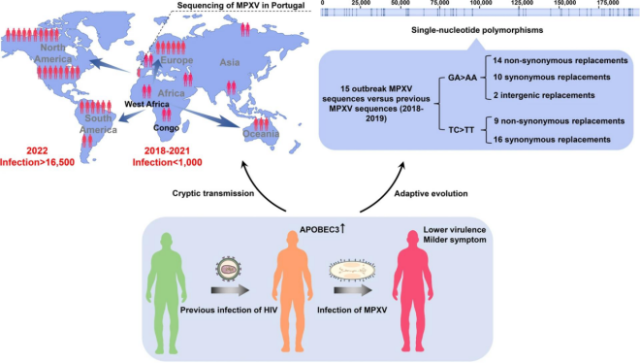 In -depth mutational analysis showing a role for host APOBEC3 in virus evolution and indications of potential human adaptation of monkeypox virus in ongoing microevolution.

Most of the emerging SNPs in the INSA sequence were not 100% fixed in the virus population (frequency was 75-95%) , which supports the existence of virus diversity in the patient population.

This also explains why monkeypox has suddenly exploded globally in the past 2 months.

According to the analysis, the first 15 published sequences for the 2022 monkeypox outbreak are related to the West African (WA) clade.

Historical epidemiological and genetic linkages suggest that the sudden global monkeypox outbreak in 2022 may have originated in Africa, as the 2022 monkeypox virus sequences are genetically linked to previous monkeypox outbreaks in Nigeria and international tourism spillovers during 2018-2019 Correlation.

Notably, about 50 genetic differences were found in the viral genomes of recent cases compared with those detected in 2018 and 2019, especially in three amino acid changes in the surface glycoprotein B21 (D209N, P722S, and M1741I). ) in. B21 is an important immune target whose mutation facilitates viral immune evasion and spread.

The APOBEC3 enzyme pool and levels depend on the host species, tissue, and different enzymes show different preferences for nucleotides or motifs (such as dinucleotides or tetranucleotides) to be mutated , with 46 SNPs showing mutational bias , of which 26 and 15 substitutions were GA>AA and TC>TT, respectively.

The unusual mutational bias and abundant A:T base signatures in monkeypox virus suggest the possibility of non-stochastic drivers, such as APOBEC3.

As one of DNA cytidine deaminase, APOBEC3 is the only enzyme whose expression is significantly up-regulated after HIV infection, inhibiting viral replication by mediating viral genome mutation.

APOBEC3 has been established for its antiviral activity against viruses such as HIV, hepatitis B virus (HBV) , human papillomavirus (HPV) , herpes simplex virus (HSV), and Epstein-Barr virus (EBV) , and also during infection. can be raised.

Specific mutations driven by APOBEC3 may further reduce the pathogenicity and symptoms caused by monkeypox virus infection and promote the covert spread of monkeypox in the population, which can be regarded as an adaptive evolution.

Epidemiologist McCollum, who leads the US poxvirus team, said more research is needed to understand which routes of transmission are likely to be the most dangerous.

The researchers noted that the severity of the disease varied by route of exposure.

People who are scratched or bitten by infected animals tend to develop more severe disease than those who have been exposed to animal respiratory droplets and particles.

Although most infections in the current outbreak are caused by close sexual contact, whether the virus first infects the skin or mucosal tissue may determine the severity of the disease.

Although adaptive mutations have been found in the genome of the recent monkeypox outbreak , monkeypox virus, as a DNA virus, theoretically does not mutate as frequently as RNA viruses such as SARS-CoV-2.

Previous smallpox vaccinations were thought to provide some degree of cross-protection against monkeypox virus infection, so healthcare workers and high-risk groups are encouraged to vaccinate against infection.

In addition, the two FDA-approved smallpox drugs cidofovir and tecovir have proven effective in treating monkeypox in clinical trials, and there is no need for the public to panic.

2.How deadly is monkeypox? What scientists know；Nature news

4.Phylogenomic characterization and signs of microevolution in the 2022 multi-country outbreak of monkeypox virus；Nature medicine