Where do the bacteria in the human gut come from?

Science: Where do the bacteria in the human gut come from? Scientists “answer” for the first time.

Worldwide, there are differences in physique, morphology, etc. between different human populations; however, the vast majority of human gut microbiomes (gut flora) have many of the same bacterial and archaeal species.

It is well known that these small beings are closely related to human health, and it has been confirmed by extensive research that they are the “initiators” of various human diseases, and most of them only live in the human gut.

Individuals living in different countries or regions have significant differences in the composition and diversity of gut bacteria.

Although diet is an important determinant, is this specificity related to the history of co-evolution between humans and their microbes? Until now, it has been an open question as to where the bacteria in the human gut come from.

In a new study , published in Science on September 15, 2022, a research team led by the Department of Microbiome Sciences at the Max Planck Institute for Biology has for the first time included data on individual microbiomes in Africa, Asia and Europe.

A systematic comparison of the evolutionary history of humans and their gut bacteria found evidence of their co-evolution.

Previous studies have shown that a small subset of gut bacterial lineages formed species with hominid ancestors, but whether this common pattern of diversification expanded in the human host remains to be demonstrated. Since humans left Africa, human populations have continued to grow globally.

Diet and lifestyle have also changed dramatically over time. However, certain intestinal bacterial species have not only not disappeared, but have “breathed and shared the same fate” with humans.

Therefore, identifying species that coexist with humans has important implications for understanding how gut bacteria co-evolve with their human hosts, and the interactions between the two.

In the new study, the team systematically compared the evolutionary history of humans with their gut microbes for the first time.

They created phylogenetic trees for 1,225 mother-child participants (839 mothers and 386 children) and 59 microbial taxa found in their guts from Gabon, Vietnam and Germany to assess inter- and intra-population sharing in humans of common diversification among gut bacterial species, and used statistical tests to investigate how well these developmental trees matched.

They found that 36 (61%) taxa matched the evolutionary history of their human hosts.

This means that for about 100,000 years after the first humans left Africa, these gut bacteria were “inseparable ” from their hosts , and the two “joined hands” to diversify (co-evolve) .

The parallel evolutionary history of humans and their gut bacteria is evident across and within nations. 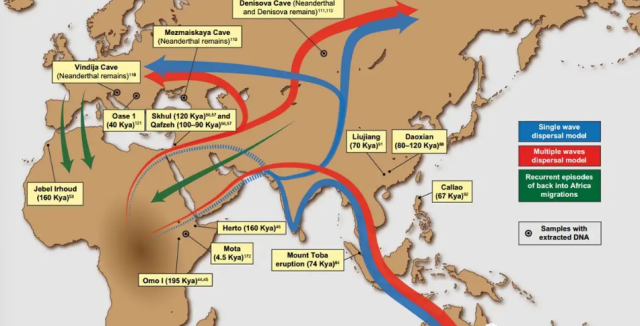 The researchers said they were surprised by the fact that gut bacteria followed the evolutionary history of their human hosts so closely.

It’s also worth noting that the species most closely related to human history are those that are now most dependent on the gut environment .

In fact, some bacteria that have evolved with humans (such as Firmicutes ) rely heavily on the human gut environment, have smaller genomes, and are more sensitive to oxygen levels and temperature. These properties make it difficult for them to survive outside the human body.

In contrast, bacteria with weaker associations with human history , such as Bacteroidetes, exhibited more similar properties to free-living bacteria.

Some gut bacteria, behaving as if they were part of the human genome, are on a gradient from ‘free living bacteria’ to being dependent on the human environment, and they appear to have acquired an irreversible dependency on the host

. This fundamentally changed the way we think about the human gut microbiome.

The researchers then sampled the gut metagenomes of the child participants (average age 7.4 months).

The analysis, combined with their mother’s data, gave them an unprecedented opportunity to test for common patterns of diversity in children’s gut microbiota.

Nine of the 20 most common childhood taxa tested showed evidence of shared diversification.

Among them, Bifidobacterium longum showed the most robust co-diversification .

Synergistic diversification signals for several taxa were expanded in children from Gabon and Germany, but not in Vietnamese child participants. These results suggest that bacteria common in the gut early in life also co-diversified with humans .

In addition, the researchers found the same results by analyzing similar datasets from participants in Cameroon, South Korea, and the United Kingdom.

Human health conditions linked to gut microbiota range from overnutrition and allergies to a range of major chronic diseases, the team said.

Some species that coexist with humans, such as Prevotella copri , Eubacterium rectale , and Bifidobacterium . longum , are known to function differently depending on the human population difference.

Therefore, knowledge of differences in gut bacterial strains across populations will lead to personalized therapies that target the microbiome .

Taken together, the findings of this study underscore the importance of developing targeted microbiome therapeutics for specific populations.

Where do the bacteria in the human gut come from?