It is very important for professionals to be able to distinguish the types of bacteria for many reasons, from diagnosing infections or checking food safety to identifying which types of bacteria give cheese the wonderful quality.

We can use a variety of molecular techniques (such as PCR, quantitative PCR, genome sequencing, and mass spectrometry) to distinguish bacterial species and even specific strains.

However, even without in-depth understanding, there are phenotypic differences between bacteria, and these characteristics can be used to distinguish them.

This includes features such as shape (such as bacteria and cocci), growth of specific nutrients, and preference for high or low oxygen environments.

According to the characteristics of the study, bacteria are divided into several categories, but these information together can greatly determine the possible identity of the bacteria.

Such a useful classification: based on the structure of the bacterial cell wall, whether the bacteria is Gram-positive or Gram-negative. 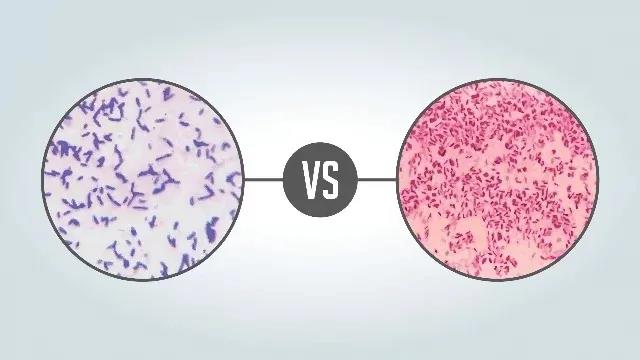 The figure below illustrates the structural differences between Gram-positive bacteria and Gram-negative bacteria.

The two key features that make the visual properties of gram-positive and gram-negative bacteria differ are the thickness of the peptidoglycan layer and the presence or absence of an external lipid film.

This is because the wall structure affects the ability of cells to retain the crystal violet staining used in Gram staining, which can then be observed under an optical microscope. 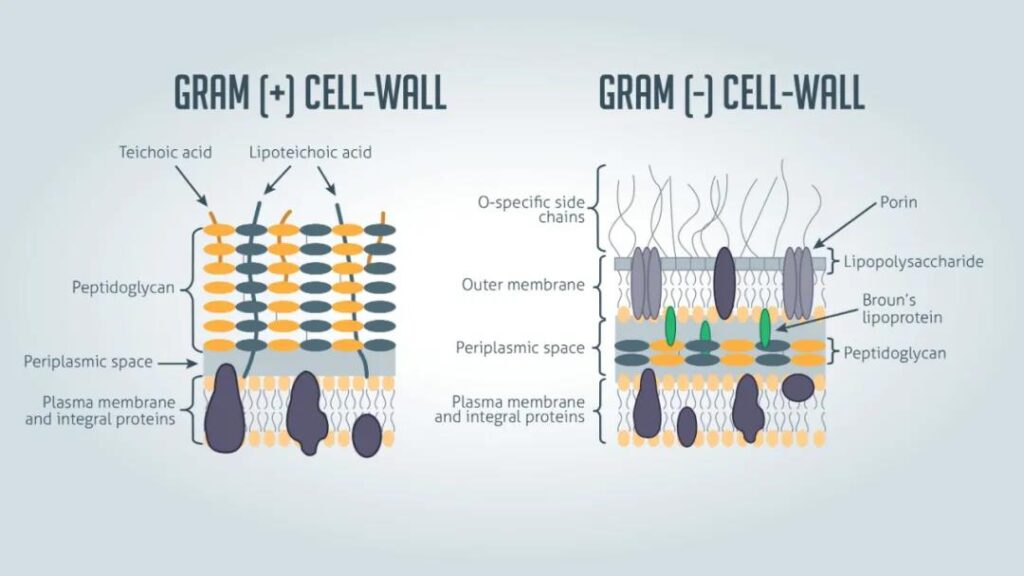 Since Gram-positive bacteria lack an outer lipid membrane, they are called monomers when their structure is correctly indicated instead of their staining properties.

The outer lipid membrane possessed by gram-negative bacteria means that when they are physically structured, they are called a second odor.

The Gram staining technique was developed in 1884 by Danish bacteriologist Hans Christian Gram.

Although Gram staining will not tell you the specific species you are looking for, it can be a quick way to quickly narrow down the range of potential candidates and directly perform follow-up tests if necessary. 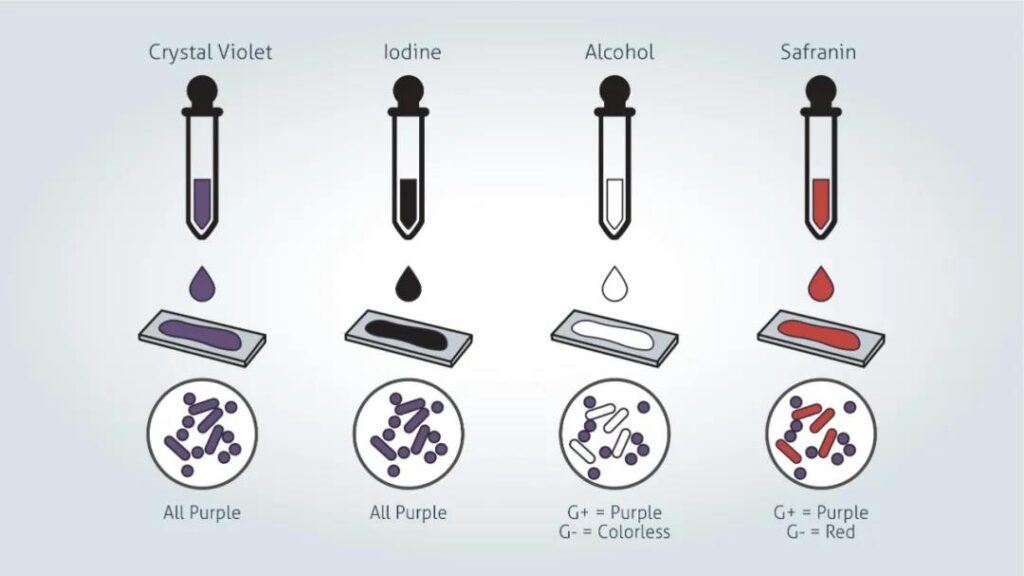 1. Paste the sample logo on the clean glass microscope slide. Make sure to use a pencil, as the reagents used in the dyeing process may wash off the ink.

2. If you are preparing glass slides from liquid bacterial cultures, please do the following:
Use a sterile loop to tap a drop of culture onto the glass slide. Gently apply the droplets in a circular motion to an area about 1 cm in diameter. For very dense cultures, it may be necessary to pre-dilute the culture to ensure that individual bacterial cells can be seen under the microscope after staining.
If the source material is from a bacterial plate:

The colony material ring was resuspended in sterile phosphate buffered saline (PBS) and then cultured in liquid.

3. After the smear is air-dried, pass the smeared glass slide through the flame two or three times. This will kill the microorganisms in the smear and fix the sample on the slide, but please be careful not to overheat the sample as this will change the cell morphology.

1. Gently paint with violet purple, and then let it stand for 1 minute. Tilt the film slightly and rinse gently with tap or distilled water. Crystal violet is a water-soluble dye that can enter the peptidoglycan layer in the bacterial cell wall.

2. Gently smear the smear with Kjeldahl’s iodine and let it stand for 1 minute. Tilt the slide slightly and rinse gently with tap or distilled water. The smear will now appear purple. Adding Gram’s iodine solution (iodine and potassium iodide) to form a complex with violet, the violet crystals become larger and insoluble in water.

3. Use 95% ethanol or acetone to decolor the smear. Tilt the slide slightly, and then add alcohol drop by drop until the alcohol is almost completely removed (5-10 seconds), rinse immediately with water to avoid excessive discoloration. The decolorizing agent dehydrates the peptidoglycan layer, causing it to shrink and tighten. In Gram-positive bacteria, the large crystal violet iodine complex cannot penetrate and escape the thick peptidoglycan layer, thus forming purple-stained cells. However, in gram-negative bacteria, the outer membrane is degraded, the peptidoglycan thin layer cannot retain the crystalline violet-iodine complex, and the color is lost.

4. Rinse gently with saffron counterstain and leave it for 45 seconds. Tilt the slide slightly and rinse gently with tap or distilled water. Saffron is slightly soluble in water and will stain bacterial cells light red, so that Gram-negative cells can be visualized without affecting the observation of the purple of Gram-positive cells.

5. Blot the glass slide dry, place it on the filter paper, and observe the smear with an optical microscope under oil immersion.

When observed under an optical microscope after Gram staining, Gram-positive bacteria have a unique purple appearance.

This is due to the purple crystal violet staining remaining in the thick peptidoglycan layer of the cell wall. Examples of gram-positive bacteria include all staphylococci, all streptococci and certain Listeria. 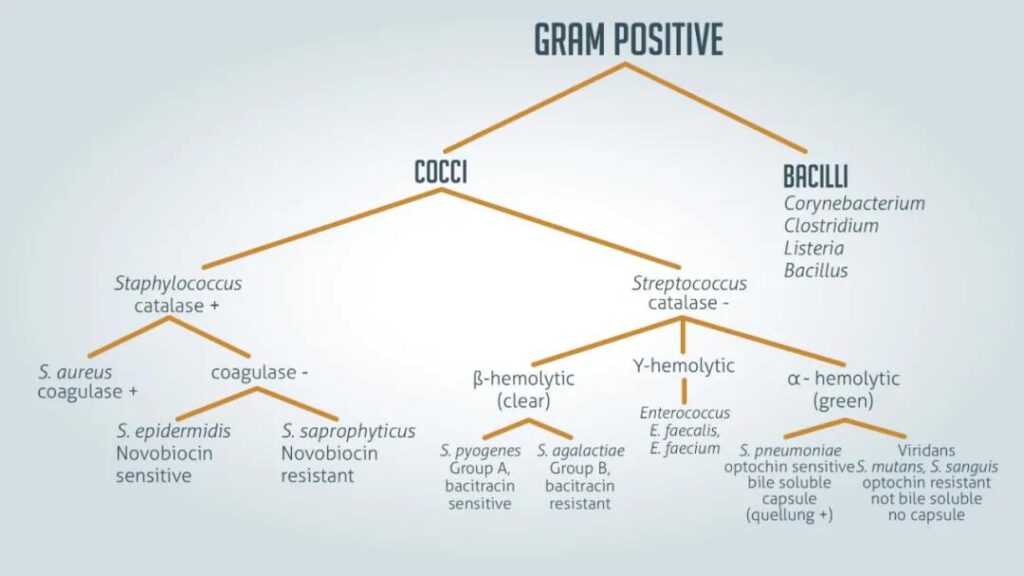 When observed under an optical microscope after Gram staining, Gram-negative bacteria appear reddish.

This is because the structure of their cell walls cannot retain crystal violet staining, so they are only stained by saffron counterstaining.

Examples of Gram-negative bacteria include Enterococcus, Salmonella and Pseudomonas.

Gram staining cannot be reliably used to assess the phylogenetic relationship of bacteria.

The single membrane of gram-positive bacteria is considered an ancestral state.

However, genetic analysis shows that this is not the case. It may have evolved multiple times in different pedigrees and is the product of convergent evolution.