CDC guideline: How to have sex if you have monkeypox?

CDC guideline: How to have sex if you have monkeypox?

The CDC has previously said that anyone with the disease cannot have sex. But for those ignoring the advice, the agency published a list of dos and don’ts “under the sheets.”

It is understood that the CDC recommends that infected patients have sex while fully clothed to ensure all rashes are covered, and even to avoid kissing.

Another piece of advice is to wash your hands and clothes immediately afterward, and even consider having sex virtually, like over the phone.

The U.S. reported 12 more cases of monkeypox on Wednesday, June 15, the largest single-day increase since the monkeypox outbreak, bringing the total number of cases in the U.S. to 85.

Globally, more than 2,000 infections have been reported in about 40 countries outside West Africa.

The CDC published guidance on sex with monkeypox patients on its page earlier this month.

The agency writes that if you or your partner has monkeypox, the best way to protect yourself and others is not to have sex of any kind and not to kiss or touch the other person’s body after infection, especially if any When a rash or ulcer occurs.

But if you or your partner contract monkeypox and decide to have sex, consider these steps to reduce your chances of spreading the virus. 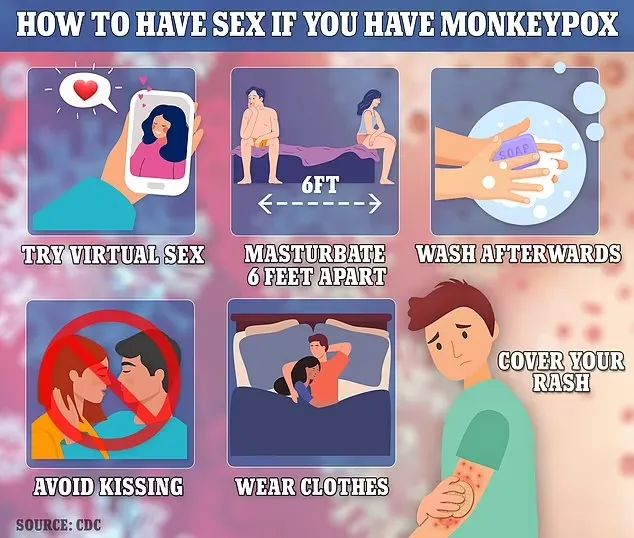 CDC poster on “How to have sex if you have monkeypox.”

Monkeypox is reportedly not a sexually transmitted disease, and anyone who comes into contact with a rash or skin lesions can become infected.

The World Health Organization is currently investigating reports that the rash-causing virus may be transmitted through semen.

Italian and German scientists say they have detected monkeypox virus DNA in patients’ semen. But it’s unclear if it’s contagious and if it can cause disease in another person.

Most cases of monkeypox infections have been reported in gay or bisexual men and are associated with international travel.

But there are now at least two cases with no recent travel and no links to known infections, suggesting the virus is spreading stealthily.

Most infections are known to be mild and clear up on their own within four weeks. But it is estimated that 1 in 100 infected patients may die.