The semen of many people was positive for the virus, but the viral load was unknown, and the pathogenicity could not be determined.

This round of monkeypox epidemic has made new discoveries.

The European medical journal “Eurosurveillance”  published four research reports from four countries including the United Kingdom, Portugal, Italy and Australia in its first issue in June.

Relevant studies have discussed the epidemiological investigation and diagnosis and treatment process of confirmed cases in the four countries since May. Among them, Italy reported for the first time that monkeypox virus was detected in male semen.

Many countries have found that the lesions are concentrated near the genitals. These all point to one possibility: close physical contact during sexual activity or the route of transmission.

The UK study argues that this information suggests a change in the underlying assumptions of monkeypox virus epidemiology in Europe. This has far-reaching implications for both epidemic monitoring and interruption of transmission.

At the beginning of this round of the epidemic, the scientific community had a great controversy over the statement that “monkeypox virus is generally not transmitted from person to person”.

By late May, the WHO updated information that there were indications that human-to-human transmission of monkeypox virus may be occurring among people who had close physical contact with symptomatic cases.

In the June 4 “Monkeypox Outbreaks in Multiple Countries: Situation Update” (hereinafter referred to as “Situation Update”) , WHO added an attribute to “close physical contact”: during sexual activity.

A four-country study published by European Monitor further confirms that close physical contact during sexual activity is a possible route of transmission. This breaks the previous epidemiological assumption that “monkeypox virus transmission is not related to sexual contact”.

An analysis of a male infected person in Australia found that the first symptom was a rash on the site of sexual contact. Subsequently, the rash was predominantly centrally distributed, with minimal lesions on the face and extremities.

In Italy, 4 infected people were traced back, and it was also found that the rash and skin lesions were limited to the genital and perianal areas, and rarely continued to spread to other parts of the body.

Both studies said symptoms first appeared at the site of sexual contact, suggesting the possibility of transmission through sexual activity.

In addition, studies in the four countries have found that the confirmed cases have “common characteristics”: mostly male, have had male-male relationships, multiple sexual partners or unprotected sex. Analysis in the UK and Italy suggests that close physical contact during sexual activity can lead to human-to-human transmission, which plays a key role in the current monkeypox outbreak.

Jin Dongyan, a professor at the School of Biomedical Sciences, Faculty of Medicine, University of Hong Kong, clarified a concept to the “medical community” that close contact transmission during sexual activity does not equal sexual transmission.

The latter refers to the transmission of pathogens from one person to another through sexual contact, via semen, vaginal secretions, etc.

Notably, the Italian study had special findings. In the most recent period (5-7 days) after the onset of symptoms, the semen of 3 confirmed individuals were found to be positive for monkeypox virus DNA with a quantified cycle value of 27-30. Due to the limited Cq value, the virus cannot be isolated at present.

“The possibility of contamination was ruled out in all three samples. This shows that the virus is shedding, and its transmission effect cannot be ruled out.” The Italian study pointed out.

Professor Jin Dongyan believes that the viral load in semen is currently unknown, and it is impossible to judge whether it is enough to cause disease.

In addition, many viruses that cause viremia are also present in semen, but do not serve as direct evidence of sexual transmission. Because the blood-testis barrier is not “perfect” for the virus, especially in the presence of systemic or local inflammation, the virus can breach the barrier and seed the male reproductive tract. Even if it cannot be replicated, it may persist.

The Italian study said further studies are needed to assess the presence, persistence and infectivity of monkeypox virus in different body fluids.

The four-country study, published in Euromonitor, also assessed the extent and timing of monkeypox virus transmission.

According to the U.S. Centers for Disease Control and Prevention (CDC) , as of 17:00 on June 7, excluding Africa, a total of 1,088 confirmed cases have been reported in 29 countries that are not endemic for monkeypox virus.

Of these, the UK has recorded 302 infections, the country with the most reported cases so far. 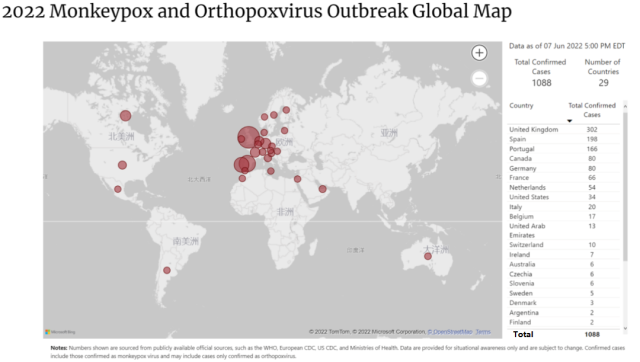 The UK study published in Euromonitor noted that the monkeypox outbreak in the country consisted of three separate events.

The first is the first patient diagnosed on May 7, an isolated case imported from Nigeria, a country endemic for monkeypox.

By the end of the 21-day follow-up period, no new infections had been reported, including healthcare workers, and those who had close contact with the patient.

The second was a familial cluster infection reported on May 12. The first patient had no travel history to a monkeypox-endemic country, and the source of infection could not be determined.

There are no follow-up new reports of this infection cluster.

The third is the 4 confirmed cases reported in England on May 16, with no known links to previous cases and no travel history to monkeypox-endemic countries.

Two of them were sexual partners. As of the end of May, new confirmed cases of monkeypox in the UK were mostly related to this group of infections. 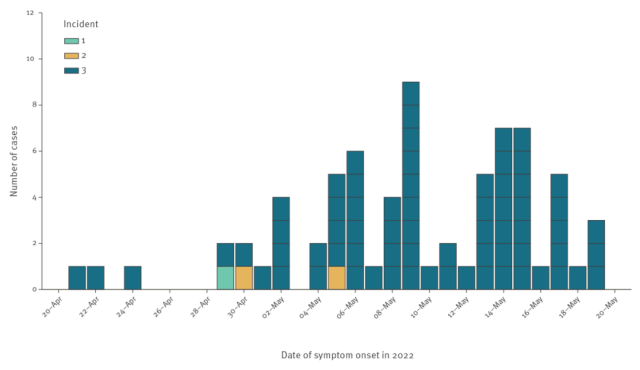 This result corroborates the UK Health Safety Agency’s statement that community transmission of monkeypox has occurred in the UK.

Community transmission has also occurred in the United States and Portugal.

The US CDC said that this means that the virus may have been “covertly spreading” in the United States long before this wave of monkeypox outbreaks.

The Portuguese study hypothesizes that undetected spread of monkeypox virus may have occurred in Europe and possibly imported into Portugal since at least early April.

Professor Jin Dongyan believes that there is no need to panic about the above remarks.

On the one hand, the number of cases in various countries has not increased suddenly and explosively, indicating that it is still a small-scale transmission and there is no sign of a large-scale outbreak.

On the other hand, countries reporting infections are limited to specific groups, mainly men who have sex with men. “The symptoms are limited to the genitals, which means that the virus has a narrow route of transmission and requires a certain amount of time and intensity of sexual activity. Therefore, it seems that the transmission of a few people will stop on its own. If certain groups of people pay more attention, the transmission will be blocked.” Professor Jin Dongyan Said that the weak pathogenicity of monkeypox virus is also a reason to worry.

Smallpox vaccine against monkeypox may not be reliable

The importance of vaccination was also mentioned in four studies in European Monitoring.

British research believes that if the epi

demic cannot be quickly controlled globally, widespread vaccination, including pre-contact vaccination, and expanded vaccination for those at higher risk of infection, can be considered.

At present, the United States, the United Kingdom, Canada and other countries have begun to carry out vaccination work for close contacts such as medical staff and sexual partners.

The vaccine used is an improved smallpox vaccine, which is currently the only vaccine approved for use against monkeypox in the world.

According to “Science”, it is not yet known how effective the vaccine will be. Evidence for the vaccine’s approval of the monkeypox indication stems from multiple studies in non-human primates, according to listing data in Canada and the United States.

Two clinical studies of health care workers in Congo (DRC) had no control group and found cases of breakthrough infection.

Science also notes that hundreds of millions of doses of traditional smallpox vaccines are stockpiled around the world to prevent terrorist attacks, among other things.

Congo (DRC) Data during the monkeypox outbreak in 1981 showed that traditional vaccines were 85% effective in preventing monkeypox.

But these vaccines are based on vaccinia viruses that can replicate. People with weakened immune systems may have serious side effects after vaccination, including myocarditis and encephalitis.

“Europe Monitoring” published a study said that Portugal, Italy and Australia have detected cases of monkeypox with HIV infection. “This makes a cowpox reaction more likely. Given the risks and benefits, traditional vaccines are not possible,” Science noted.

One confirmed case each in Italy and Portugal reported that they had been vaccinated against traditional smallpox.

As of May 24, 69% of healthcare workers and 14% of men who have sex with men are willing to be vaccinated against smallpox.