Monkeypox, a zoonotic disease that was first identified in monkeys used for research in 1958, is mainly transmitted in animals.

Human monkeypox cases were first identified in the Congo (DRC) in 1970, and monkeypox has been endemic in several African countries since then, including Nigeria, the Democratic Republic of the Congo, and the Central African Republic.

Cases of monkeypox outside Africa are usually acquired from travel to Africa.

However, monkeypox has recently started to spread in Europe and North America, with 131 confirmed and 106 suspected cases of monkeypox reported in 19 countries as of May 24, since monkeypox cases were reported in Europe in early May .

The first case in the UK travelled to Nigeria before the first case was confirmed, but many of the new confirmed cases have not travelled there, suggesting that community transmission of monkeypox has begun .

The World Health Organization (WHO) said the monkeypox outbreak was unusual but manageable .

The WHO also said it would hold further meetings to provide more recommendations for countries around the world to deal with the monkeypox outbreak.

As the number of monkeypox virus infections continues to rise, health departments in many countries have begun to be on high alert, and the United States is the first to sign a monkeypox vaccine production contract with Bavarian Nordic.

Monkeypox is a zoonotic virus that spreads mainly in animals but has been endemic in some African countries for years, and so far cases in Europe and the US have largely been directly linked to travel.

More recently, monkeypox virus is beginning to spread in countries outside Africa.

Monkeypox virus belongs to the genus Orthopoxvirus of the family Poxviridae and is an enveloped double-stranded DNA virus with a genome size of about 190kb .

Determination of the monkeypox virus genome sequence will help to better understand its epidemiology, source of infection and mode of transmission, as well as vaccine development.

The analysis results showed that the monkeypox virus that broke out in Europe and the United States belongs to the West African clade. 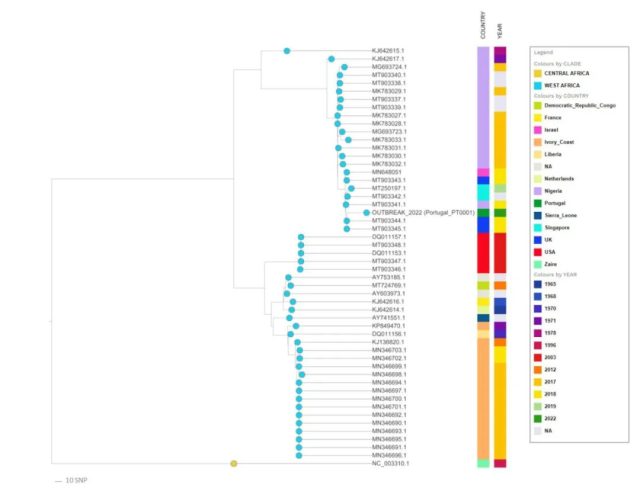