The number of confirmed or suspected cases of monkeypox in Europe has continued to rise recently.

The World Health Organization is concerned that the occurrence of monkeypox cases in many countries may indicate that the monkeypox virus has been hidden in the community, and the number of infections may increase further in the future.

Monkeypox is a viral zoonotic disease. Monkeypox virus can be transmitted from animals to humans through close contact.

Epidemiologists say the cause of the monkeypox outbreak in Europe is unclear, and it is unclear whether the monkeypox virus is transmitted through sexual activity or close sexual contact.

Scientists are sequencing the virus’s genes to see if there is a link between different infected people, or if the monkeypox virus has mutated that makes it more infectious.

The initial symptoms of monkeypox infection in humans include fever, headache, muscle aches, back pain, and swollen lymph nodes, which can later develop into a widespread rash on the face and body.

Most infected people recover within a few weeks, but others become seriously ill and even die. Death cases have been reported in the European monkeypox outbreak . 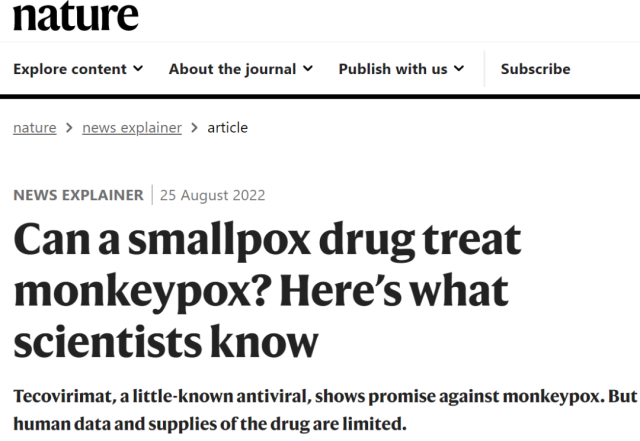 There is currently no dedicated monkeypox vaccine, but WHO data shows that the smallpox vaccine is 85% effective against the monkeypox virus.

After the WHO declared smallpox eradication in 1980, the reduction in vaccination against smallpox may have contributed to the spread of monkeypox in Europe, according to Christian Hapi, director of the African Centre for Excellence in Infectious Disease Genetics.

Biosecurity officials are particularly concerned about smallpox, which can kill about 30 percent of those infected.

Although the disease was eradicated more than 40 years ago, there are concerns that the smallpox virus could be accidentally released or weaponized from laboratories around the world where samples are still kept.

In the U.S., the FDA has not authorized tecovirimat to treat monkeypox because the agency says the disease has not been eradicated, so the drug can still be tested in humans.

That means U.S. doctors can only get a drug considered experimental monkeypox through the U.S. Centers for Disease Control and Prevention (CDC) for special permission.

This red tape has kept many doctors from prescribing tecovirimat, even though the country has a stockpile of 1.7 million courses – mostly for the fight against smallpox.

Can you still get the smallpox vaccine?

In the 1950s, the whole world was defeated by a sudden virus, the smallpox virus.

At that time, there was no way for this virus to be consistent. Therefore, after the outbreak of the virus, there were 3.5 Millions of people died, mainly because the death rate of this virus is very high.

Later, under the research and invention of scientists from all over the world, a smallpox vaccine was successfully developed, which can greatly reduce the mortality and morbidity of smallpox.