What are Genome Differences Between Monkeypox Virus and Smallpox Virus?

Brief Analysis: What are Genome Differences Between Monkeypox Virus and Smallpox Virus?

Smallpox is an acute infectious disease caused by smallpox virus (VARV) infection with a high fatality rate and is regarded as one of the most devastating diseases in human history.

With the widespread use of vaccines, in 1980, the World Health Organization officially declared the eradication of smallpox.

As a result, smallpox vaccination was discontinued around the world, resulting in an increasing number of people who were completely immune to variola virus and related orthopoxviruses.

A few days ago, there was an outbreak of monkeypox in the world, and 12 countries and regions have reported cases of monkeypox.

Monkeypox virus (MPV), a close relative of the smallpox virus, causes human disease similar to that of smallpox, and it may undergo adaptive mutations and spread in humans.

So what needs to be vigilant is whether monkeypox virus can evolve into a virus with high frequency of human-to-human transmission, or will it be the next smallpox virus?

Based on the research papers published by Sergei N. Shchelkunov and others in earlier years, we analyzed the similarities and differences of the two viruses from the genome level.

Monkeypox virus (MPV) , belonging to the genus Orthopoxvirus of the Poxviridae family, is an enveloped double-stranded DNA virus.

The first human case of monkeypox was found in Congo (DRC) in 1970. Subsequent investigations found that human monkeypox is a sporadic disease caused by animal-to-human transmission in the tropical rainforests of Central and West Africa.

The genomic DNA size of MPV-ZAI is 196858 bp, its structure contains 190 non-overlapping ORFs of ≥60 amino acid residues, and the GC content is 31.1%, which is similar to other orthopoxviruses.

The degree of identity between the overlapping genomic nucleotide sequences with VAR-IND and VAR-GAR was 84.6% and 84.5%, respectively.

The central genomic region of orthopoxviruses is a highly conserved gene.

This region of MPV-ZAI DNA is separated by ORFs C10L and A25R, is 101466 bp, has 96.3% sequence homology with the corresponding part of the VAR-IND genome, and encodes a virion protein compared with VAR-IND in amino acid sequence It has 91.7~99.2% homology.

The orthopoxvirus genome has two terminal inverted repeat (TIR) ​​sequences, including a set of short tandem repeats and a terminal hairpin structure.

The MPV-ZAI genome contains a 6379 bp TIR with the four ORFs on the right replicated as part of the inverted terminal repeats, the VAR genome lacks repeats of these ORFs and shows a shorter TIR.

The amino acid sequence identity of putative virulence and immunomodulatory factors shared by MPV-ZAI and VAR-IND was 83.5-93.6%, while the identity between the corresponding ORFs of VAR-GAR and VAR-IND was 97.3-100%.

The IFN resistance gene C3L, a homolog of the eukaryotic translation initiation factor eIF-2α, inhibits the antiviral activity of double-stranded RNA-dependent protein kinase (PKR) by acting as a decoy.

Another IFN resistance gene, E3L, is expressed in either the first or the second methionine in a long/short form.

The long form contains an N-terminal domain that mediates Z-DNA binding, nuclear localization and PKR interaction in vaccinia virus (VAC) and is required for virulence.

Both the short and long forms contain a C-terminal domain that binds double-stranded RNA, inhibits IFN-induced activation of PKR and 2-5A synthase, and is required for IFN resistance and VAC host range.

MPV-ZAI has obvious mutations in the first translation initiation codon and downstream nonsense mutations, and only the short form can be translated.

These mutations result in diminished IFN resistance in vivo, possibly resulting in less human-to-human transmission of MPV than variant transmissibility.

MPV is less pathogenic than VAR

Deletion of the gene encoding the IL-1L binding protein may be associated with fever and pathogenicity, possibly indicating that MPV has a lower pathogenicity than VAR.

MPV is a discrete species and evolves independently of VAR

In order to clarify the evolutionary network of each strain, the proteins encoding ankyrin repeats in the largest gene family of orthopoxviruses were analyzed.

The B19R gene of VAR-IND was deleted in the MPV-ZAI genome, while the D1L gene was correspondingly deleted in both VAR strains. indicate that neither virus is a direct ancestor of the other.

Systematic analysis of the terminal variable genomic regions of four human pathogenic orthopoxviruses revealed that the major and minor subspecies of VAR are closely related, with MPV farther away from VAR than VAC.

MPV is a discrete species that exhibits multiple differences in the virulence genes of major and minor strains.

It is likely that MPV and VAR evolved independently of the orthopoxvirus ancestor similar to CPV, which contains a more complete set of genes.

The global outbreak of MPV and the serious diseases it causes make this virus not to be underestimated, and it is urgent to closely monitor the fatality rate and transmissibility of related infections. 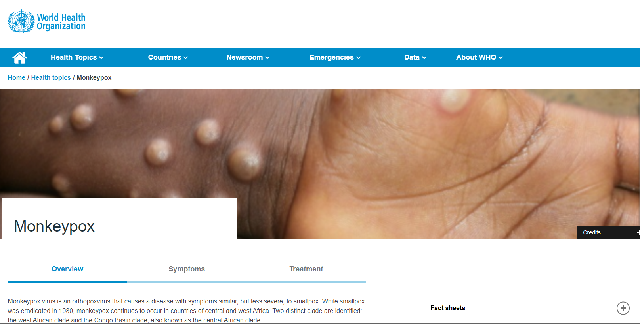 On May 21, three research groups from Portugal, Belgium, and the United States have released the preliminary results of the genome sequences of the viruses carried by infected persons in the recent monkeypox (Monkeypox) outbreaks in many places around the world.

The DNA sequences of three monkeypoxviruses (MPVs) initially showed homology, all belonging to a mild West African strain, which were closely related to monkeypoxviruses discovered in the UK, Singapore and Israel in 2018 and 2019. 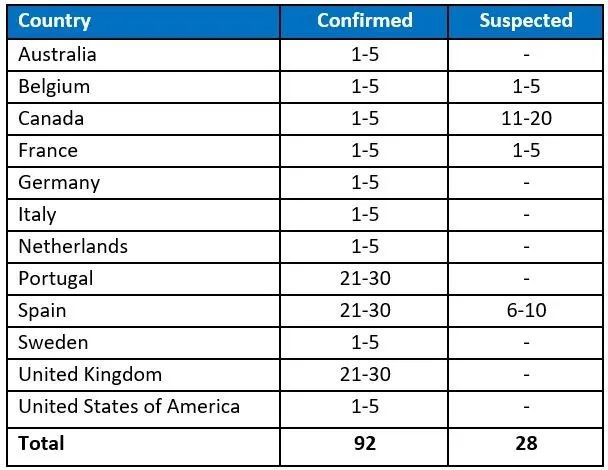 Reports of cases of monkeypox non-endemic countries received by WHO from 13 to 21 May. Source: WHO

The World Health Organization has previously stated that there are two main branches of monkeypox virus: the West African branch and the Congo Basin branch.

The West African branch has a lower lethality rate, about 1% of infections result in death; the Congo Basin branch can cause a 10% mortality rate.

According to the latest analysis in the United States, the monkeypox virus in this outbreak has indeed mutated a lot from the previous monkeypox virus, with a total of 94 nucleotide changes and 51 amino acid changes.

This mutation appears to be very high for a DNA virus. Do these mutations affect monkeypox infectivity? Does the traditional smallpox vaccine protect against monkeypox virus? Neither is clear! 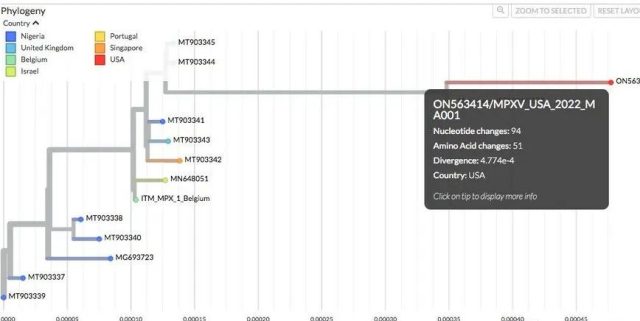 Laboratory examination, PCR/qPCR technology can be used to detect monkeypox genome fragments from skin lesions of monkeypox patients, providing a basis for rapid clinical laboratory diagnosis; it can also be isolated from skin lesions by electron microscopy or culture Monkey smallpox virus.

In addition, fluorescent antibody method and radioimmunoassay can detect simian variola virus antibodies from the serum of infected persons, but they are generally only used for epidemiological investigations.

Signs and symptoms of monkeypox virus infection resemble those of smallpox, but the disease is usually milder.

Monkeypox-infected individuals with a history of exposure to animals may initially present with “flu”-like symptoms, followed by herpes, pustules, and scarring on the skin.

What are Genome Differences Between Monkeypox Virus and Smallpox Virus?