Monkeypox is a rare infectious disease that spreads across species (including from animals to humans) and is caused by Monkeypox Virus ( MPXV ) of the genus Orthopoxvirus (which also includes variola virus ) .

Monkeypox is endemic in West and Central African countries, and the small number of cases reported in other regions are generally associated with imports from these countries.

The outbreak of monkeypox in many countries was first discovered in May 2022. As of June 18, more than 2,500 confirmed cases have been reported worldwide.

On June 24, 2022, researchers from the Portuguese National Institutes of Health published a paper entitled: Phylogenomic characterization and signs of microevolution in the 2022 multi-country outbreak of monkeypox virus in the top international medical journal Nature Medicine .

The study shows that the virus strain associated with the monkeypox outbreak identified in May 2022 is a well-characterized divergent clade of monkeypox virus that emerged in endemic African countries in 2018-2019, or represents the most recent evolution of the virus. Evolutionary change.

The study also points to the ongoing evolution of the monkeypox virus during human-to-human transmission, which may explain the increased transmission rate of the strain. 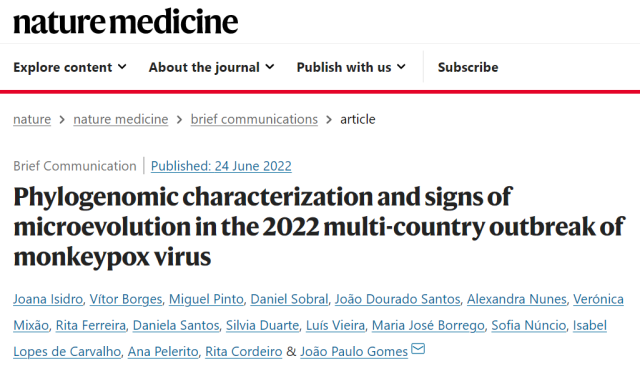 The monkeypox virus in 2022 differs from the closely related viruses in 2018-2019 by about 50 single nucleotide polymorphisms (ie genetic variations) , far exceeding the general level of orthopoxviruses.

The authors suggest that this divergent clade may indicate that evolution is still accelerating. Further analysis also uncovered the first signs of continued virus evolution—15 single-nucleotide polymorphisms, minor variants, and gene deletions—in the human-to-human transmission of the outbreak.

Although further research is required, these results provide data on the underlying mechanisms of virus evolution and possible genetic targets for virus adaptation to humans, helping to elucidate the evolutionary trajectory of monkeypox virus strains in 2022.