A ketogenic diet (KD)is a diet high in fat, low in carbohydrates, and suitable for protein and other nutrients. When people are on a ketogenic diet, the body “burns fat” and metabolizes more ketone bodies(including acetoacetate, beta-hydroxybutyrate, and acetone)to use as a source of energy.

Over the past decade, there has been growing interest in the potential therapeutic benefits of the ketogenic diet.

Initiating a ketogenic diet in midlife (14-month-old) male mice extended their healthy lifespan and maintained skeletal muscle mass, strength and endurance, and neurocognitive function. But little is known about the effects of a ketogenic diet in healthy middle-aged female mice.

Although the concept of improving aging through a ketogenic diet has been proposed, most of the research supporting this hypothesis has so far been conducted in male mice.

Post-fed and fasting blood β-hydroxybutyrate levels were significantly increased in female mice in the ketogenic diet group compared with control mice. Both the control and ketogenic diet mice gained weight over the course of the study, but there was no significant difference in body weight between the groups.

Interestingly, the ketogenic diet mice all showed a trend of increasing body fat compared with the control mice. In addition, the study found that the 2-month ketogenic diet did not affect the mice’s grip strength, grid-line hanging, or ability during the rotarod test. These results suggest that neither motor coordination nor strength/endurance were significantly altered in healthy middle-aged female mice on a short-term ketogenic diet. 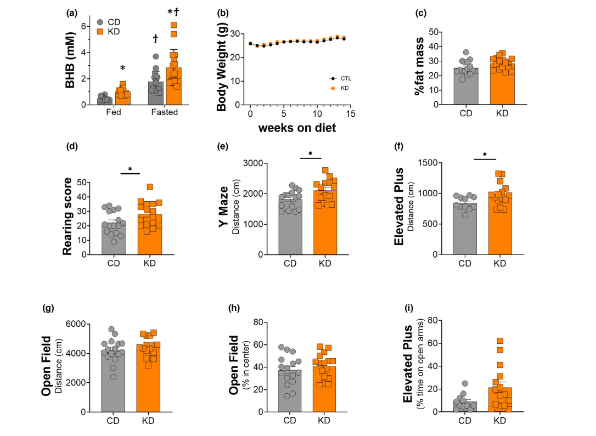 In the Y-maze experiment, female mice in the ketogenic diet group spent significantly more time in the target quadrant, and found that the latency to the target hole was significantly reduced, indicating that their spatial learning ability was improved. 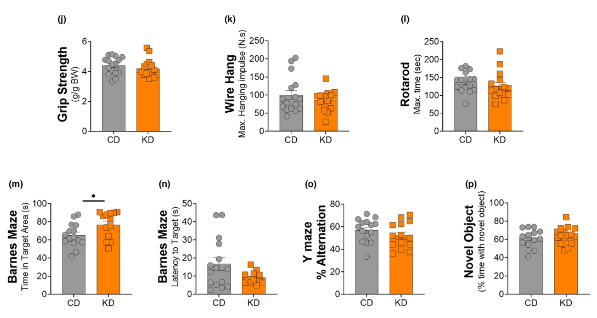 In the cerebral cortex, there was no change in acetylated proteins between the control and ketogenic diet mice, while in the hippocampus, there was a marked decrease in protein acetylation.

In addition, β-hydroxybutyrate and lysine levels did not change between groups, and representative oxidative phosphorylation (OXPHOS) proteins in the cerebral cortex and hippocampus did not change during the 2-month ketogenic diet.

Overall, this study provides important evidence for the gender specificity of the ketogenic diet.