The COVID-19 epidemic is in a cold winter, and many countries in Europe and the United States are accelerating the pace of obtaining COVID-19 vaccines. However, an episode appeared this Thursday (17th). An official from a European country accidentally “leaked a secret” on Twitter: For several vaccines, including Pfizer, the EU’s purchase unit price is cheaper than the United States. This move immediately triggered dissatisfaction with Pfizer, accusing it of violation of confidentiality regulations. The “New York Times” commented that this situation shows that the US government is not active in the negotiations, but just wants to obtain the vaccine as soon as possible.

According to reports from The New York Times and The Guardian on the 18th, it was Eva De Bleeker, the Belgian State Secretary in charge of the government budget, that leaked this “commercial secret”.

On the evening of the 17th, Brick posted a chart on Twitter listing the vaccine purchase prices obtained by the EU through negotiations with pharmaceutical companies. She revealed in her tweet that Belgium will spend 279 million euros (about 341 million) this year. USD) to purchase 33.5 million doses of vaccine. But this “secret” tweet was quickly deleted. 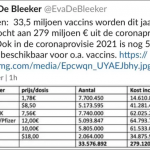 The Guardian pointed out that the prices of medicines and vaccines have always been regarded as trade secrets that need to be closely protected.

Regarding the vaccine price list, European Commission spokesperson Eric Mamer responded: “For the benefit of society and for the benefit of ongoing negotiations, we cannot comment on this case. All News about vaccines and prices are protected by confidentiality clauses.”

Brick’s spokesperson Bavo De Mol explained that Brick’s posting of these prices on Twitter was related to a political controversy, and she was using this to refute the fact that the opposition had no preconceived opinion of the government. Accusations of keeping sufficient funds to buy vaccines.

“We tried to be transparent, but it seemed a bit too transparent.” De Moore said.

Is the United States expensive? US media analysis: related to R&D subsidies and purchases

AstraZeneca has previously stated that based on production cost estimates, the cost of each dose of its vaccine is expected to be between US$3 and US$5. It is not yet clear why Brick’s announced price ($2.18) is so low. According to the analysis of the “Washington Post”, the reason why Pfizer and Moderna vaccines are more expensive than other vaccines is partly because the manufacturing costs of these two vaccines are higher, and they use different processes than other vaccines.

It is worth noting that the prices of some of these vaccines are significantly different from those purchased by the US government. Bernstein Research analyzed that for Pfizer vaccines, compared with the EU’s 14.7 US dollars, the US purchase price reached 19.5 US dollars, and the EU enjoyed a 24% discount; for AstraZeneca vaccines, the US’s The purchase price is expected to be 4 US dollars, while the EU is 2.18 US dollars, 45% cheaper than the United States; the European Union purchases Sanofi and GlaxoSmithKline vaccine prices, also 11% cheaper than the United States. The United States has not yet signed a vaccine cooperation agreement with CureVac.

The Washington Post analyzed the reasons for the price difference

But on the other hand, the European Union’s purchase price for the Moderna vaccine is US$18, which is higher than the US government’s US$15. At present, the Moderna vaccine has received an additional order of 100 million doses of vaccine from the US government, and obtained an emergency use authorization from the US Food and Drug Administration (FDA) on the 18th local time. On January 6 next year, the EU is expected to obtain authorization. The cost of the Moderna vaccine is US$18 per dose. The company has previously stated that it hopes to fix the unit price of the vaccine at US$25 to US$37.

The Washington Post believes that the price difference between the vaccines developed by Pfizer and BioNTech is partly because they received R&D funding assistance from the European Union. In June this year, the European Union’s financial sector provided a US$122 million loan to the German BioNTech company to help the company develop a vaccine. In September, the company received another $458 million in support from the German government.

In addition, according to Pfizer’s statement, the difference in the number of vaccines purchased by the EU and the United States is also an important reason. Pfizer said in a statement that “Pfizer and BioNTech are using a tiered pricing model based on quantity and delivery date.” Compared with the first batch of 100 million doses of Pfizer vaccine purchased by the US government, the number of vaccines purchased by the European Union is 200 million doses, which is twice that of the United States and is the “largest initial order” for Pfizer vaccines so far.

The New York Times commented that the higher purchase prices in the United States indicate that the government is just eager to obtain vaccines and is not actively negotiating with pharmaceutical companies.

However, some health economics experts believe that even if the vaccine price paid by the United States is higher than that of the European Union, this is insignificant compared to the economic losses caused by the epidemic.

“Compared to the losses caused by the uncontrollable epidemic, it is nothing to spend more money on vaccines,” said Benedic Ippolito, a drug price researcher at the American Enterprise Institute. “It’s as if you shrugged. Well, our prices are a bit high. But we are facing a pandemic, so let’s talk about drug prices later.