Optimize seed cultivation strategies to expand biologics production faster and at lower cost. The high cost of biologics such as monoclonal antibodies (MAbs) and the limitations of global access have focused the biopharmaceutical industry’s attention on the rapid and economic development of strategies for such therapies. Optimizing the process is a method that helps shorten production time and reduce the cost of goods (CoG).

Today, process optimization in the upstream cell culture process has enabled the production of biological products on a smaller scale and with a smaller footprint than before. In the seed culture of upstream cell culture, an optimized process for the production of MAb Chinese hamster ovary (CHO) monoclonal cells is being developed to support high cell density (HCD) cell banks and production processes to reduce factory scale, capital investment and indirect Cost, while improving production efficiency.

In the traditional process, the ratio of the amplified seeds for the preparation of monoclonal antibodies is about 1:5, the initial inoculation amount is 0.3×106 cells/mL, and the seed amplification process of five to eight transfer steps is adopted. The standard seed resuscitation usually starts in a shaker flask, then amplified by a shaker (RM), and then transferred to a 50L bioreactor for sowing.

Finally, the stirred tank (STR) bioreactor (200 L and 500 L) is used for production culture, which can be expanded to a capacity of 2000L. By using the 2D RM bioreactor in the perfusion mode (cells stay in the exponential growth phase during the entire culture process), the viable cell density in the last step is increased to 100×106 cells/mL, and the seed ratio is >1:100 This can skip the intermediate transfer step.

For example, the HCD cell bank can be resuscitated directly, and then inoculated into the RM bioreactor in a larger volume (0.5–2L, depending on the volume of HCD cells), thereby bypassing the expansion of cell culture in the shake flask and potential errors And contamination issues, such as the need to manually dispose of the flask. In addition, during the perfusion seed expansion step, the cells can reach a higher density to directly inoculate pilot or production bioreactors without the need for process transfer through multiple medium-scale STR bioreactors.

This not only reduces the number of steps, but also reduces the total number of seed cultivation days, thereby reducing the initial investment and operational CoG. However, not all CHO clones that produce MAb can optimize the culture process, because high cell density will impair protein expression levels and genetic stability.

Our goal is to explore the possibility of cultivating CHO clones expressing commercial monoclonal antibodies in HCD for an optimized and scalable cell culture seed culture program. We investigated whether the disposable RM perfusion bioreactor (working volume is 1-25L) can achieve a cell culture density of at least 100×106, and viable cell density (VCD) under different working volumes.

Use process analysis technology (PAT) of various scales to monitor HCD parameters. When the culture (1L working volume) in the RM bioreactor reaches the required HCD, use the STR disposable bioreactor (200 L) that automatically expands the medium volume to the pilot scale, and then feeds it in batch mode run.

During the run, we measured cell density and viability and the critical quality attributes (CQA) of the monoclonal antibody, and then compared these results with the same monoclonal antibody passed through the standard seed production process. The results determined whether HCD perfusion seed culture can inoculate standard production bioreactors to reduce the number of transfer steps, and whether it is possible to use a PAT-based control system to automatically inoculate a staged process to reduce the amount of inoculation.

Cell line: We chose the CellcaCHO-DG44 cell line expressing human monoclonal antibody to study the practicality of using HCD perfusion culture to inoculate a pilot-scale bioreactor. Select cell lines with relevant media and cell culture parameters for validation studies, because the fed-batch process used to produce this monoclonal antibody has been well characterized by the manufacturer.

Bioreactor: The RM20/50 bioreactor was chosen for seed culture research because it continuously updates the cell culture medium, which enables mass transfer between the headspace and the culture medium to achieve efficient, low-shear mixing.

The system is used with a disposable RM perfusion bag (working volume is 1-25L), which is made of pharmaceutical grade low density polyethylene and can be used in the entire RM and STR bioreactor bag to ensure quality stable. The bottom of each bag has an integrated perfusion membrane to form a compartment for removing cell-free medium during the perfusion process to minimize cell loss or damage.

The size of RM perfusion bioreactor ranges from 2L to 50L (working volume 1L-25L), and the common RM bioreactor design can simplify the transfer process.

A bioreactor (200 liters) with a disposable reaction bag was used as a pilot-scale disposable bioreactor. The scale of the bioreactor ranges from 50L to 2000L, and uses the same established bioreactor design principles as the stainless steel bioreactor. All bags have similar geometric shapes on the scale to facilitate process transfer and enlargement.

The cells were cultured at 36.8°C, pH 6.95, and 60% DO (with a 10° angular swing rate). Online PAT sensors, including biosensors, are used to monitor and control the VCD and cell viability of the culture fluid, and realize automatic feeding. The 2L culture was cultured under perfusion for another two days to determine the maximum VCD.

Experimental bioreactor research: The VCD model of the RM perfusion bioreactor was created based on the signal from the biosensor. Using this model, VCD can be continuously measured online. When the cells reach 100×106 cells/mL, the calculated cell inoculation amount can produce an initial cell density of 0.33±0.04×106 cells/mL, which is perfused from the RM to the bioreactor Automatically transfer to pilot scale bioreactor.

The cells cultured in the perfusion bioreactor (400mL, about 100×106 cells/mL) were used to inoculate the 200L disposable bioreactor. The cells were cultured for 12 days at 36.8°C, pH 7.1 and DO 60% using proprietary media and feeds. The feed was added in batches after the 4th day period. VCD and cell viability data are measured and collected by the B sensor. The cell-free supernatant was sampled for N-glycan profile analysis to determine the quality and titer of the MAb product.

Seed culture performance: The results (Figure 1 below) show that within six days, the RM perfusion bioreactor can grow a CHO cell culture with a viability of >90% and a high cell density of >100×106 cells/mL. Compared with the inoculum of the standard RM bioreactor, the number of VCD has increased by 33 times. These perfusion bioreactors used 2L bags of support cells to grow to 170×106 cells/mL VCD within 8 days, and had a survival rate of >90%, which showed that the oxygen demand of cells can be met at such a high cell density. 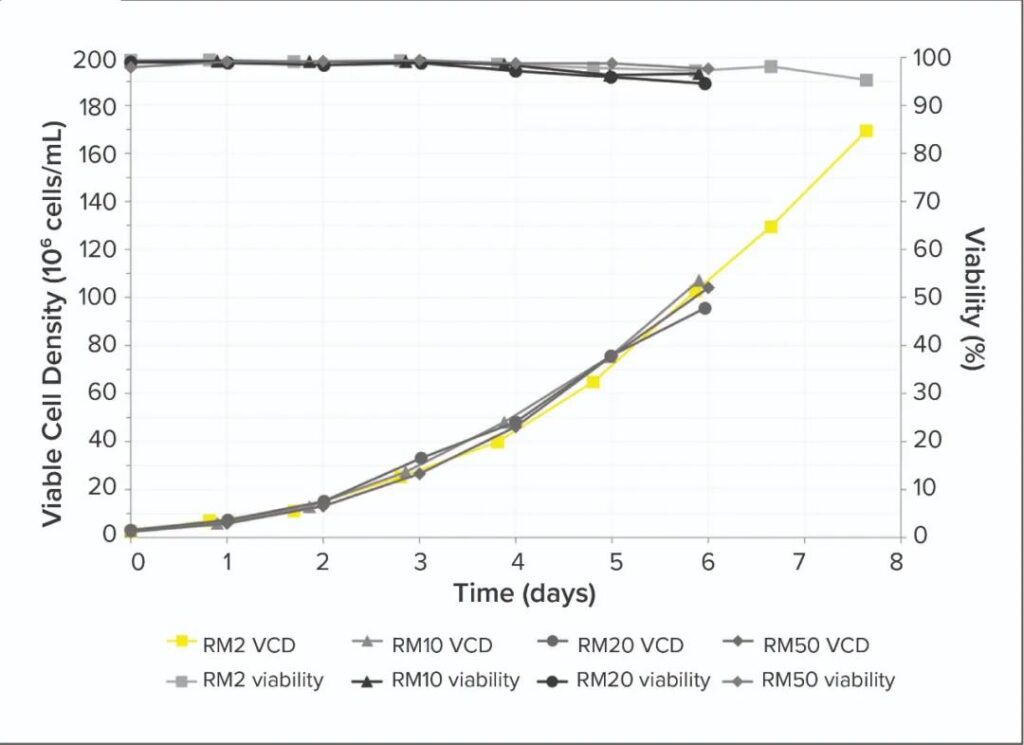 Figure 1: Viability cell density (VCD) and viability of Chinese hamster ovary (CHO) cells cultured in an RM perfusion bioreactor with a working volume of 2 to 50 liters.

Under the 50L scale test, our VCD and vitality results are consistent. The reproducibility and scalability of the HCD culture using the perfusion bioreactor shows that this method can produce cells with sufficiently high VCD to be directly seeded into a 200L pilot bioreactor, indicating that it can use suitable HCD The culture (using RM10 or 20 for example) has the potential to inoculate a 2000 liter production bioreactor.

Pilot study: Use the inoculation kit controlled by the automatic PAT sensor to use the cells in the proprietary medium of the RM perfusion bioreactor for the inoculation of the 200L pilot scale bioreactor, and the target initial cell density is 0.33±0.04×106 cells /mL This results in an actual starting cell density of 0.37×106 cells/mL, which indicates that the PAT sensor can achieve seeding accuracy comparable to manual seeding.

The fed-batch results of the pilot-scale bioreactor after inoculation of HCD cells from the RM perfusion bioreactor and the traditional fed-batch cell culture (Figure 2 below) showed comparable growth characteristics throughout the process.

Both reached the maximum VCD of 25×106 within 7 days and their viability was >90%. The MAb titer is also similar, using the standard seed culture process to reach 3.5g/L, while the optimized seed process reaches 3.2g/L.

These results indicate that in a single-use bioreactor, compared to a standard 12-day fed-batch operation running on a 200L scale, the use of HCD cell seeding pilot scale bioreactors has no disadvantages to cell growth, viability or titer influences. 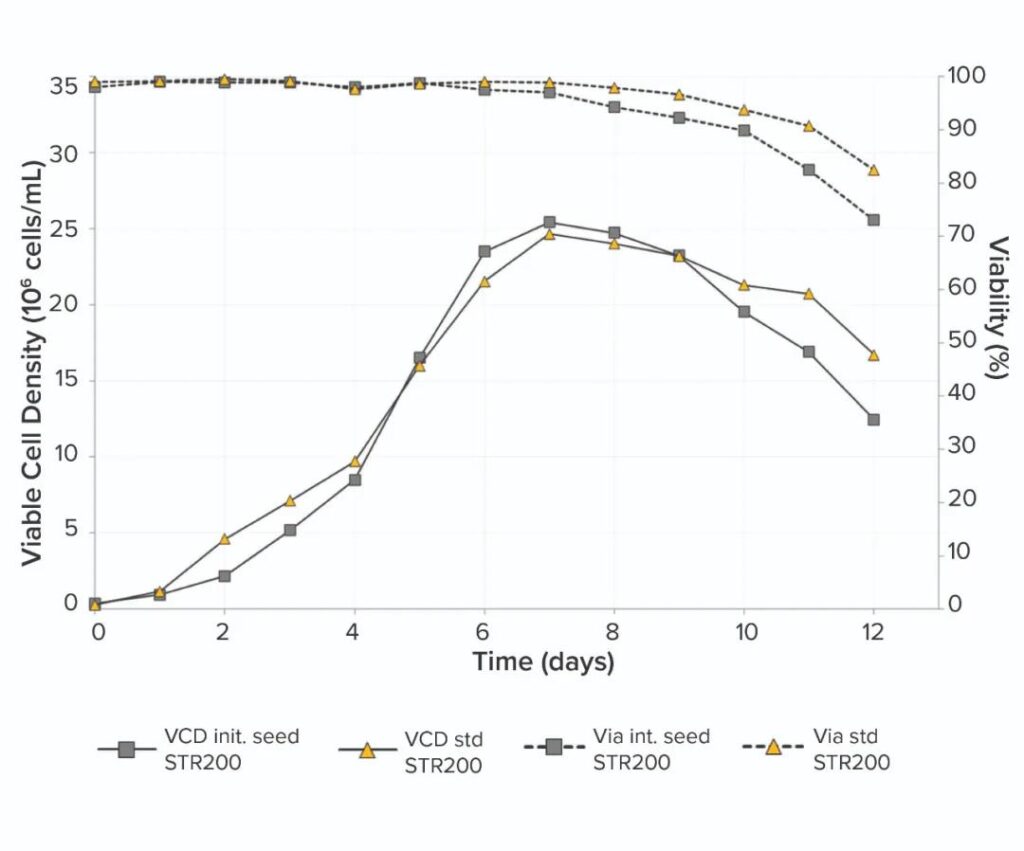 Product quality: The CQA of the MAb product of the fed-batch culture of the inoculation standard and the optimized seed culture (Figure 3 below) showed similar trends in the glycan profile of the G2/G0 and G1/G0 ratios, and generated 95% The fucosylated form. The results of optimizing the performance of the cells cultured in the pilot-scale bioreactor for seed culture show that using HCD cells to inoculate the pilot-scale bioreactor will not affect the product quality. This shows the usefulness of this method for scale-up of mixed infusion/fed batch process. 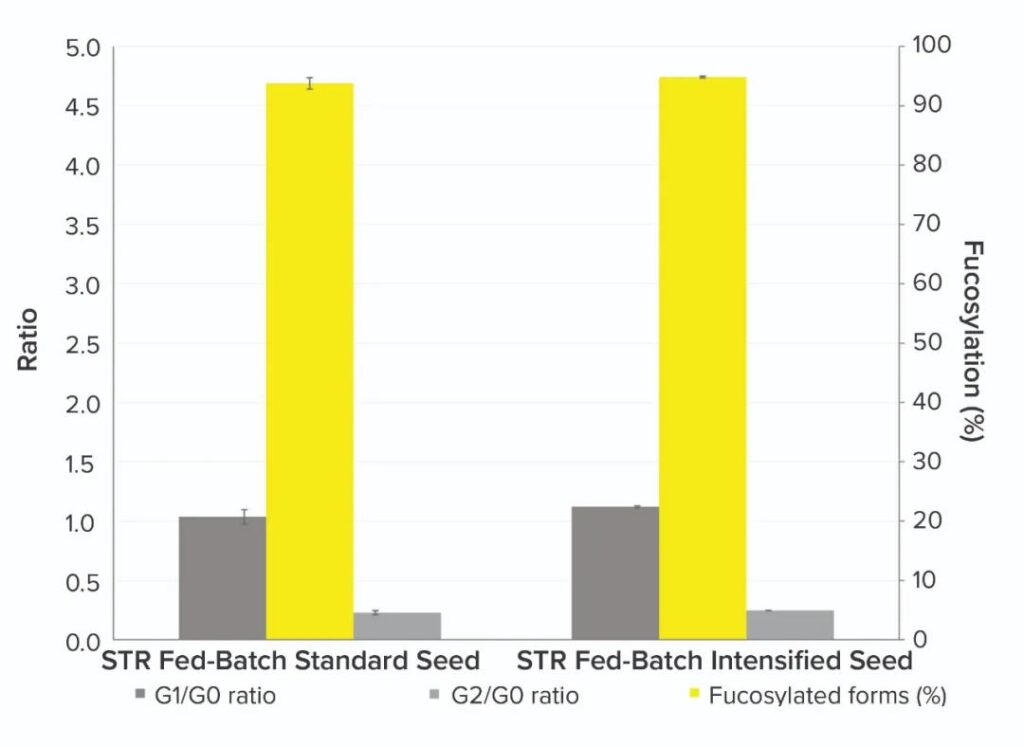 Productivity and quality The verification studies conducted here show that the single-use RM perfusion bioreactor can achieve HCD cell culture (>100×106 cells/mL), and its survival rate at various working scales from 1L to 25L Both are >90%. The study also showed that HCD cells (inoculated through automated process control) and standard fed-batch culture cells used to inoculate a 200L bioreactor can produce comparable cell growth, viability, potency, and MAb CQA. Our results show that the use of this optimized seed culture method can increase productivity without compromising product quality, and it is possible to increase the cost-effectiveness of biologics production.