Troponin (cTn) is highly specific and sensitive to myocardial injury/necrosis, and is the first biomarker for the diagnosis and stratification of myocardial infarction.

Recently, the Biomarker Research Group of the European Heart Association pointed out that creatine kinase isoenzyme (CK-MB) is no longer useful in diagnosing myocardial infarction, and CK-MB should withdraw from the stage of history. 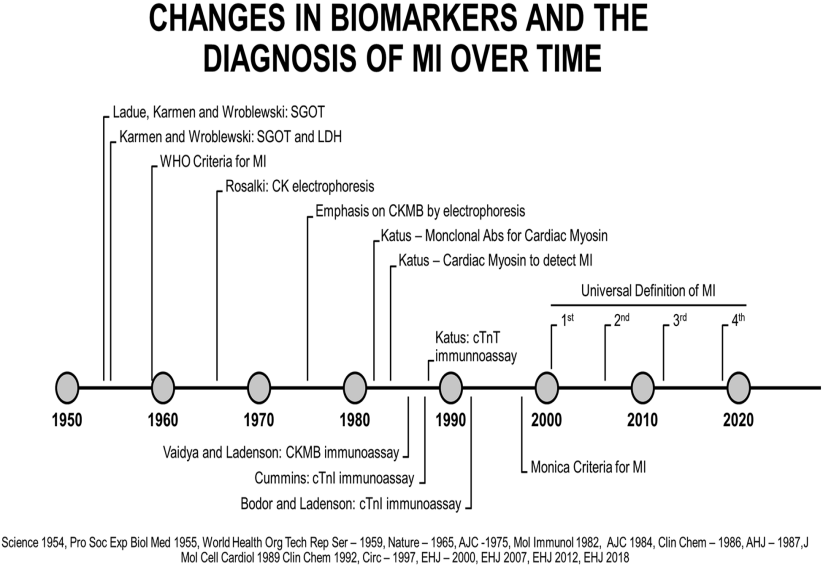 CK-MB was born out of nowhere. It was a major advancement in the detection of acute myocardial injury. Compared with lactate dehydrogenase (LDH), aspartate aminotransferase (AST) and creatine kinase (CK), CK-MB is more sensitive and more sensitive. Specific.

But later, people gradually discovered that elevated CK-MB is very common, especially after skeletal muscle injury after surgery, trauma, sports or accompanied by renal failure. Moreover, the time from the onset of chest pain to the detection of the rise of CK and CKMB in plasma is 4 hours or even longer, which cannot meet clinical needs.

CK-MB is no longer used in some places. Due to the small fluctuation of CK-MB, some interventional doctors still rely on CK-MB.

Troponin (cTn) is highly specific and sensitive to myocardial injury/necrosis, and is the first biomarker for diagnosis and stratification of myocardial infarction.

Studies have found that if CK-MB increases but cTn does not increase in patients, the prognosis does not deteriorate. In the latest European guidelines, the role of CK-MB has further declined.

Some people think that using CK-MB can help detect reinfarction. In the past, due to lack of data in this area, it was believed that the increase in cTn would last for several days, while the CK-MB cleared quickly. But this assumption is wrong. In fact, despite the high cTn, it is still easy to observe the significance of cTn rising again.

Another area of ​​controversy is perioperative myocardial injury. However, some studies have found that the CK-MB after interventional surgery is gradually increased, but still within the normal range! It is difficult to understand that we have a more sensitive cTn, and we must insist on using the insensitive CK-MB.

There are similar problems after cardiac surgery. cTn can predict mortality more reliably than CK-MB. In a large-scale bypass study, compared with CK-MB, cTnI had the strongest association with 5-year mortality.

Regarding the cost issue, a latest analysis by the emergency department found that almost no CK-MB is done, which reduces the cost by 47,000 US dollars per year. This does not include personnel, time, and health care system costs. Moreover, only CK-MB was elevated, and none of the 17 patients with normal cTn had an event.

The expert group pointed out that for the following reasons, CK-MB should withdraw from the stage of history!

1. Compared with cTn, CK-MB has lower sensitivity in detecting myocardial injury and infarction.

2. For possible myocardial infarction, CK-MB does not help the patient’s risk score.

3. Because cTn performs better, it is not necessary to detect CK-MB in the diagnosis of re-infarction.

5. CK-MB is not needed to detect myocardial injury during perioperative period, cTn is more sensitive.

6. CK-MB is no longer tested in cTn hospitals.

7. Detection of CK-MB increases the cost, but does not increase the clinical benefit.

Therefore, the ESC biomarker research team recommends that CK-MB can be removed from the list of biomarkers in routine testing for evaluating cardiovascular disease patients.