The patient generally adopts the supine position. When the patient is in the supine position, the lower extremity of the surgical side can be slightly abducted, the knee joint can be placed naturally on the side of the operating bed, and the lower limb of the opposite side can be placed flat on the operating table, with a tourniquet and routine disinfection drapes. And add a one-time waterproof sheet. Connected to the arthroscopic lavage system, the lavage fluid is generally 3000ml of saline plus 1ml of 0.1% epinephrine, which can better maintain a clear vision during the operation.

The conventional knee flexion is 90°, located at the junction of 1cm on the lateral knee joint line and 1cm on the lateral edge of the patellar tendon, that is, the lateral knee and eye. Insert a round head puncture cone and cannula into the incision, and enter the joint cavity through the subcutaneous tissue, subpatellar fat pad and joint capsule. This entrance is located above the lateral joint line and about 1cm below the patella. If the entrance is too close to the joint line, the lateral half The anterior angle of the plate may be torn or damaged, or it may penetrate into the joint cavity from below the lateral meniscus when the arthroscope is inserted. If the entrance position is too high, the arthroscopy will enter the space between the femur and tibial condyle, which will affect the observation of the posterior angle of the meniscus and other posterior structures. If the arthroscopy is inserted close to the edge of the patellar tendon, the arthroscopy can penetrate the fat pad, affecting the field of view, and making operation difficult. 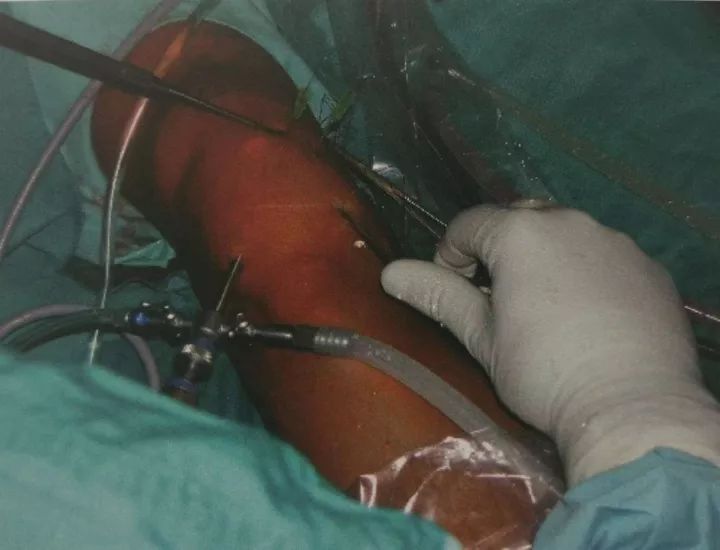 The entrance position is similar to the anterolateral approach, located at the junction of 1 cm on the medial knee joint line and 1 cm of the medial edge of the patellar tendon, that is, the medial knee and eye. The above two entrances are the most commonly used entrances. The conventional positioning method is to quote the method of foreign authors. 1cm beside the patellar tendon may be too large. In our country, 0.5cm beside the patellar tendon is appropriate. In addition, it should be based on the patient’s age, body shape, and body fat. Factors such as thinness and thickness should be considered for positioning. The author’s experience is that at the medial and lateral knees and eyes, the incision site should be at the most depressed area of ​​the anterior patellar tendon of the knee joint before the fluid is filled in the joint cavity. After the fluid is filled with the joint cavity, the incision site should be the fullest.

The entrance is located behind the medial collateral ligament, 1cm on the posterior medial joint line, and 1cm behind the posterior medial condyle of the femur, that is, the small triangle area between the posterior and inner edges of the medial condyle of the femur. The knee can be touched at 90°. When using this approach, care should be taken to prevent popliteal vascular nerve injury. The knee joint should not be filled when positioning, and the knee should be bent 90°. The knee joint should be filled during puncture, and the blunt cannula core should be inserted from the upward oblique to the inward direction. If the entrance is to be used during the operation, a long needle can be used for puncture after positioning. If there is fluid outflow to indicate that the needle has entered the joint, the cored cannula can be inserted along the puncture needle position and the direction of travel. The structure of the inner chamber.

Partial synovectomy can be done through the anterior internal approach and the anterior external approach. The total synovectomy includes the resection of 20% of the posterior joint cavity and must be completed with 6 approaches. Before synovectomy, first conduct a detailed exploration of the joint cavity, starting from the suprapatellar capsule, through the internal and external recesses, tibiofemoral joint, around the medial and lateral meniscus, around the cruciate ligament, and finally observe the posterior joint cavity. Following the above sequence for synovectomy can avoid omissions and make the vision of the joint cavity clearer (Figure 10-3, Figure 10-4). 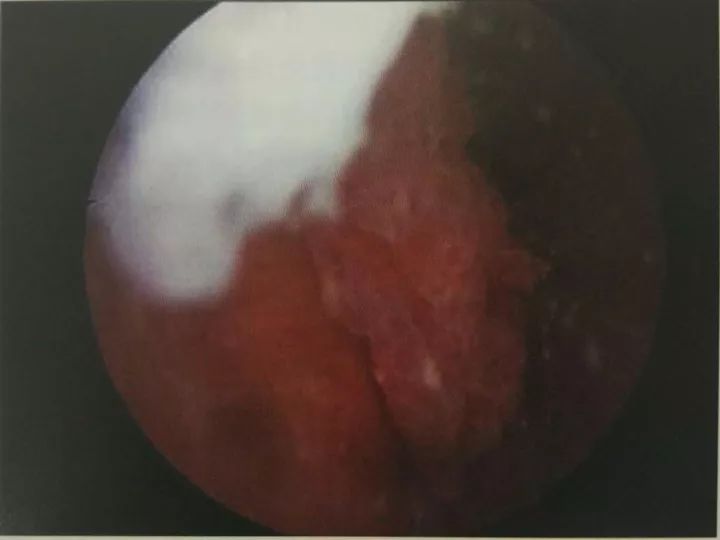 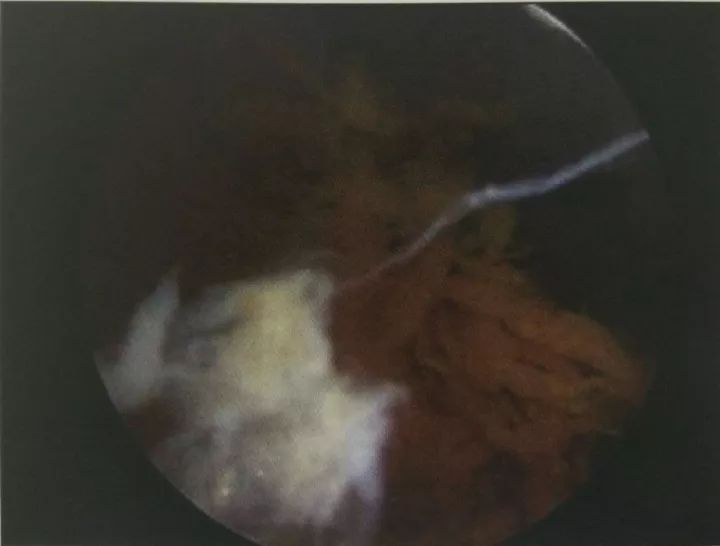 Some surgeons believe that there is less joint bleeding after synovectomy, and drainage may not be placed. The author’s experience is that patients with total synovectomy have more blood oozing, some patients up to 500ml, it is recommended to place a closed negative pressure drainage bottle. After the operation, the affected limb is usually wrapped with thick and large burn gauze and compressed with elastic bandage. Oral non-steroidal anti-inflammatory drugs after surgery can reduce swelling, relieve pain, and increase the range of joint motion. Generally, hemostatic drugs are not used, and anticoagulants (low molecular weight heparin or rivaroxaban) are added to patients over 50 years old.

Antibiotics are used prophylactically and should be stopped within 24 hours after surgery. The quadriceps femoris isometric contraction exercise, ankle pump exercise and straight leg elevation exercise can be started the next day after the operation. On the second day after the operation, the knee joint flexion and extension activities were carried out step by step, the wound was opened and the dressing was changed, the incision condition and drainage volume were observed, and the negative pressure drainage tube was removed. The stitches are removed two weeks after surgery. Generally, the joint range of motion is required to reach 90° within one week, and over 120° within two weeks, and it should return to the preoperative range of motion 4 weeks after surgery.

Special attention should be paid to corresponding treatments according to different causes. For example, patients with rheumatoid arthritis should be treated with anti-rheumatic drugs, and patients with pigmented villous nodular synovitis should be started one month after surgery. Local radiotherapy for the knee joint, with a total dose of 1200 cGy, in 10 sessions.

Including wound infection and intra-articular infection, although arthroscopic surgery is less traumatic, the operation is rapid, and the flushing of the perfusion fluid significantly reduces the infection rate, but there is still the possibility of infection. Current research shows that the incidence of infection after arthroscopy is 0.5% to 0.8%, and the principle of sterility must be strictly controlled to prevent infection. The preoperative disinfection must be thorough.

The lower extremity surgery must be strictly disinfected from the part below the tourniquet to the toes. It is not possible to disinfect the knee and surrounding area according to the open surgery and then use the sterile middle to wrap the foot, because the liquid can leak to the outside. The sterile towel covering the feet is wet and contaminates the operation area. After the operation table is laid, waterproof measures should be added. Generally, a disposable sterile waterproof sheet is used for another layer.

Postoperative white blood cell count increased, skin temperature of the affected limb increased, blood C-reactive protein and red blood cell sedimentation rate increased significantly. Bacterial culture and drug susceptibility test should be done quickly, antibiotics should be used empirically, and sensitivity should be selected after the drug susceptibility results come out. antibiotic. If there is no improvement after 3 days of antibiotic treatment, arthroscopic lavage and drainage can be performed urgently.

It is more common in operations where there are more soft tissue treatments during the operation, such as the release of the lateral knee joint support band under arthroscopy, the release of adhesions, and synovectomy. The use of high-frequency electrosurgical knife and radio frequency vaporizer for operation and intraoperative hemostasis can effectively prevent postoperative bleeding. At the same time, a negative pressure drainage tube should be placed in the joint cavity when performing this type of hand length to lead out the blood. Postoperative measures such as applying pressure on gauze layer by layer, bracing, and local cold compress are more effective. For patients with hemophilic arthritis, attention should be paid to timely supplementation of coagulation factors to normal levels before and after surgery.

Deep vein thrombosis of the lower extremities may occur after arthroscopy. AANA’s statistics report that the incidence rate is 0.1%. Pulmonary embolism occurred in some cases, which eventually led to death. Clinicians should attach great importance to it. When the lower limbs are obviously swollen, B-ultrasound examination of blood vessels can be used to confirm the diagnosis. In terms of prevention, the tourniquet usage time should be shortened during the operation to no more than 90 minutes. After the operation, early movement of the affected limb and ankle pump exercises are encouraged. For 50-year-old patients, use low-molecular-weight Nieparin or Rivaroxaban to prevent thrombosis.

Joint adhesions and stiffness can occur after arthroscopy. Reasonable functional exercise rehabilitation in the early postoperative period can effectively avoid joint adhesion. If the adhesion is severe and the knee joint stiffness obviously affects the movement, arthroscopic lysis is feasible.

Synovectomy for rheumatoid patients has a definite preventive protective effect on the joints, and the patients can obtain satisfactory results, and joint pain and inflammation are significantly alleviated. Therefore, for patients with persistent joint swelling and hyperplasia and X-ray manifestations of 0 to I stage, medical treatment for 6 to 12 months is invalid. Only patients with synovial lesions that do not affect the joint space should be actively treated for pigmented villous nodules.

Synovitis is divided into two types: diffuse and localized. For patients with limitations, studies have shown that the postoperative effect is good, no matter whether open surgery or arthroscopic surgery, there is no recurrence after local surgery; for diffuse patients, postoperative recurrence is prone to recurrence, with a recurrence rate of 9% to 14%, surgery is recommended Local radiotherapy in the next month can greatly reduce the recurrence rate.

After total synovectomy for hemophilic arthritis, it is reported in the literature that it can reduce the number of joint bleeding, alleviate the condition and slow the progression of the disease. Patients with synovial chondromatosis underwent arthroscopic surgery, and the surgical effect is better than simple free body removal.